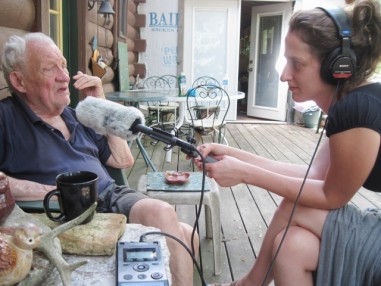 Sarah Geis interviewing a subject for

David Polk, producer and host at WFMT-FM in Chicago since 2006, is the classical station’s new program director.

“One of my first assignments at WFMT,” Polk said in a Q&A on the station’s website, “was to help Studs Terkel organize his press interviews when one of his last books was published. Can you imagine an assignment like that? And since all of the interviews were done over the phone he had me sit next to him so that he could pretend that he was talking to someone in person. That was surreal.”

Polk is fluent in French and lived in Paris in 2004, where he interned with the American Embassy and L’Orchestre de Paris.

Sarah Geis interviewing a subject for This Land Press.

Geis began at StoryCorps in 2006 as an intern. By 2008, she was running its San Francisco office, hosting listening parties, planning storytelling workshops and developing community partnerships.

Over the past year, she has worked for This Land Press, a new-media company based in Tulsa, where she co-developed and produced a weekly program of Oklahoma stories for public radio.

“Most importantly,” Third Coast said in the Dec. 12 announcement, “Sarah listens avidly to audio stories of all stripes, and she’s dedicated to supporting producers while building an equally engaged legion of listeners.”

She begins work at the Chicago-based Third Coast Jan. 6.

Starting in January, reporter Peter Hirschfeld will cover state government and the Vermont legislature for Vermont Public Radio. He’s been covering the state capital beat since 2009, most recently as bureau chief for the Rutland Herald and Times Argus newspapers, also in Vermont. He joins Bob Kinzel, who has covered the legislature and state government for VPR since 1981.

Projects reporter Kristina Goetz joins Louisville Public Media’s Kentucky Center for Investigative Reporting in mid-January. She is currently a senior reporter on the Arizona Republic’s storytelling team, crafting both short- and long-form enterprise reports. She also worked at the Commercial Appeal in Memphis, Tenn., as a senior reporter on its regional projects/enterprise team. Previously  she worked as an editorial research assistant for journalist Carl Bernstein, editing first drafts of chapters of A Woman in Charge, a biography of Hillary Clinton.

WNYC has hired Kio Stark as a senior producer for its Data News team. Stark will manage the station’s data collaborations with outside journalism organizations and work to incorporate data journalism into other WNYC programs and reporting units, in collaboration with Data News Senior Editor John Keefe. Stark, an adjunct professor at New York University, comes from the Knight-Mozilla OpenNews project, where she was the learning coordinator and editor. She also wrote the self-published Don’t Go Back To School: A Handbook for Learning Almost Anything, as well as the novel Follow Me Down. She will join the station Jan. 13.

The new digital content manager at WXPN in Philadelphia is Gennine Uliasz. She oversees all multimedia for the station and its World Cafe program, including editorial projects, special events and social media. She previously worked as a digital producer and editor for CNBC.com as well as an associate producer for CBS-TV’s 60 Minutes.

The Pacifica Foundation has named Robert Hennelly interim p.d. of WBAI, its New York station. Hennelly has been producing the station’s morning drive-time show for two months. He is a contributing writer to Salon and a communications consultant for the AFL-CIO, according to his LinkedIn page, and previously worked as a reporter and editor for New York’s WNYC from 2002-13. At WBAI, he replaces Andrew Phillips, who left the station in September over a disagreement with Pacifica Executive Director Summer Reese regarding fundraising programs airing on the station.

Jack Dominic will retire as station manager of Cincinnati Public Television in February and begin directing the National Voice of America Museum of Broadcasting in West Chester, Ohio, in March. Dominic has worked at CET for 37 years, and played a key role in its 2008 merger with ThinkTV in Dayton.

Kareem Hatcher has been promoted to production services manager at Vegas PBS. Hatcher joined the station more than two decades ago as a television assistant and rose through the production ranks to his new position in senior management. “Kareem is a local success story,” said Tom Axtell, Vegas PBS g.m., “moving from UNLV intern at the station 23 years ago, through progressively responsible positions, to his new role overseeing all TV, cable and web production for Vegas PBS.”

A former Sesame Workshop executive has been named president of the ABC Family cable channel. Tom Ascheim was chief strategy officer and executive vice president of Sesame Learning from October 2011 to September 2013. Previously, he served as c.e.o. of Newsweek and e.v.p. of Nickelodeon.

Patricia Poehler is the new v.p. of organizational relations for dual licensee WFYI in Indianapolis. Poehler retired as a senior marketing executive for Indiana Farm Bureau Insurance in 2009, and spent three years as director of outreach with Decatur Township Schools. Poehler also served on WFYI’s Board of Directors from 2009-13, chairing the community engagement committee for two years.

WUCF TV, PBS’s primary station serving Orlando since July 2011, has appointed its first development director. John Brady is a former development v.p. for Alabama Public Television and the NJN Foundation for Public Television and Radio. Recently, he was a fundraising executive for the University of Montevallo in Alabama. Brady now directs corporate and foundation support, viewer and membership programs and on-air fundraising initiatives. He will also help develop major charitable giving and planned giving programs.

WKSU at Kent State University in Ohio has hired Mark Syroney as senior director of external affairs: marketing, audience engagement and business development. He runs the new department, which is focused on building brand awareness, increasing underwriting sales , growing membership and expanding the reach of the station and its online music stream FolkAlley.com. Previously, Syroney spent eight years as the senior advancement officer at the Kent State University College of Podiatric Medicine, raising more than $2.7 million for the school in Independence, Ohio.

Ernest Wilson, former CPB Board chair, is one of 37 fellows in the fall class of the National Academy of Public Administration (NAPA). The independent, nonpartisan organization consults with federal officials, working to improve the effectiveness of public programs, strengthening cross-sector collaborations, providing transparency to government operations and creating long-term macroeconomic solutions. Established in 1967, the congressionally chartered academy has nearly 800 fellows from public and private sectors including members of Congress, former presidential cabinet members, business executives, public administrators and academics. Wilson is currently dean of USC Annenberg School for Communication and Journalism, and the Walter Annenberg Chair in Communication at the university in Los Angeles. He served on the CPB Board from 2000-10, chairing the governing body during his final two years.

Kim P. Bui, associate editor for social media and outreach for Southern California Public Radio in Pasadena, is among four incoming board members of the Online News Association (ONA). Bui joins the board of the Washington, D.C.-based digital-journalism advocacy organization in January 2014. She recently was named interim mobile product manager at SCPR, which broadcasts under the call letters KPCC. One of four members departing the board is John Keefe, senior editor for data news and journalism technology at WNYC in New York City.

Garvey Shubert Barer, a Washington, D.C.-based law firm that represents interests including public media, has hired attorney Judy Endejan to expand the practice to Seattle, Wash. Previously, Endejan spent 10 years with GTE (now Verizon) in the northwest and California, developing an understanding of public utility regulation and administrative law. D.C. firm owner John Crigler said he was “thrilled” to announce Endejan’s arrival. “I have known Judy for years,” Crigler said in a statement, “and for most of those years have tried to persuade her that her practice would perfectly complement ours. Her unique background as a journalist, a litigator, a First Amendment advocate, and an expert in media law and developing technologies will broaden our expertise in the field of communications.”