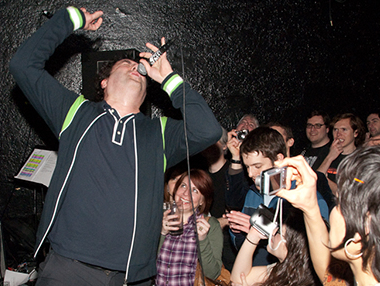 Over 13 years, Scharpling has become an alt-radio institution and a fundraising powerhouse for WFMU, raising more than $200,000 during the station’s annual marathons. (Photo: John Dalton)

Tom Scharpling began the Oct. 29 edition of his comedy call-in show The Best Show on WFMU in a typically off-kilter way: mocking celebrity reactions to the recent deaths of musicians Lou Reed and Dave Brubeck.

But three hours later, Scharpling soberly announced an ending of his own. The final episode of the groundbreaking cult show that Scharpling has hosted live for nearly 600 episodes since October 2000 will air Dec. 17.

“I’ve joked around about this before, and I’m not joking around about it now,” Scharpling said. “It’s hard to do something that’s more or less a full-time job for free, and I’ve done it for as long as I can. . . . It has to happen. That’s just the reality.”

Listen to the episode on which Scharpling announced his exit:

From WFMU’s tiny studios in Jersey City, N.J., using only rock songs, his own creativity and contributions of guests and callers, Scharpling created a world of comedy unto itself over the course of The Best Show. Billed as “three hours of mirth, music and mayhem,” The Best Show exemplifies the freeform programming that defines WFMU: in-studio interviews with comedians and musicians; discussions with callers, often subjected to Scharpling’s mockery; and semi-scripted routines with Scharpling’s comedy partner, Jon Wurster, who voices a number of buffoonish characters usually originating from the fictional town of Newbridge, N.J.

Like most of WFMU’s on-air talent, Scharpling does his own program for no pay. Yet he has raised hundreds of thousands of dollars for WFMU every year, more than any other weekly host. Last year, Scharpling raised almost a tenth of the station’s total budget, and he’s just one of more than 70 hosts on the air.

“I felt it for a few years kind of hanging over my head, and I started the year off just saying to myself, ‘This feels like it could be the last year of the show,’” Scharpling told Current. “I was giving myself nine months to change my mind or have something change my mind for me.”

The program has found a passionate international fan base thanks to live web streaming, audio archives and a chat forum that Scharpling hosts on his own website, FriendsOfTom.com. Comedians including Patton Oswalt and Zach Galifianakis rank among its admirers. Scharpling found online success before many other comedy-focused podcasters, such as Jesse Thorn, host of NPR’s Bullseye, and Marc Maron, whose WTF podcast is distributed to public radio by Public Radio Exchange.

“The Best Show’s been a phenomenon unlike anything we’ve ever experienced,” said Ken Freedman, WFMU’s station manager.

“He’s taken the call-in radio show and flipped it around on its ear in a way that very few people have done, ever,” said Thorn, a fan and occasional guest who once won The Best Show’s annual “worst caller” award. “He draws you in by trying to get you to guess what he’s sincere about and what he isn’t. And that is a really nifty deconstruction of call-in talk radio, which is a medium about inciting passion.”

Scharpling joined WFMU in the mid-1990s while working at a New Jersey sheet-music store and running an independent record label. At first, he stuck to playing music, with occasional talk.

That changed in 1997, when Wurster — also the drummer for proto-indie rock band Superchunk — invented the first of what would become dozens of call-in characters. Ronald Thomas Clontle was a pompous music critic with inexplicable tastes, who loved P. Diddy but hated David Bowie.

Scharpling kept Wurster on the air in character for 45 minutes, promoting a fictitious book, without letting listeners in on the joke, prompting angry callers to take Wurster to task. The recording of the call became an underground hit, passed around online and eventually on Scharpling’s own best-of compilation CD. Freedman and WFMU Music Director Brian Turner let Scharpling start his own call-in show to showcase his and Wurster’s comedic talents.

WFMU had previously aired comedy, including on Freedman’s own program Seven Second Delay, but the unusual three-hour length of the show Scharpling proposed for Tuesday nights made it a riskier bet, Freedman said.

Yet the show quickly took off, thanks in large part to online distribution. Though WFMU is “very bad” at tracking metrics, Freedman said, early viral episodes of The Best Show saw “an extreme amount of traffic like we had never seen before.” Hundreds of listeners tuned in online for The Best Show in its early years, while most WFMU programs drew almost no streaming traffic.

Though it sounds improvisatory, a lot of prep goes into The Best Show, and Scharpling and Wurster’s routines are tightly constructed. Every 20-minute-plus call requires dozens of pages of notes.

That effort paid off for WFMU, as Scharpling became the fundraising anchor for the station. During annual fund drives, he routinely raises more than $200,000 over the course of two three-hour shifts.  Freedman once offered Scharpling a salary, but WFMU couldn’t pay him a rate comparable to what he’d make as a professional radio host elsewhere, and the station and Scharpling dropped the idea. Scharpling would also have felt uncomfortable accepting money from WFMU, he said.

“It’s a listener-sponsored station, and it’s already down to the bone in terms of being solvent,” he said. Though Scharpling makes a small sum of money through merchandising best-of albums and other products, those funds only cover travel expenses for him and Wurster.

Throughout The Best Show’s run, Scharpling found success in show business, fulfilling a longtime ambition. He wrote for and eventually became an e.p. for the USA series Monk, which aired from 2002 to 2009 — a job he landed through the show’s creator, Andy Breckman, also a WFMU host. He also wrote for the Adult Swim series Tom Goes to the Mayor and directed music videos for acts including the New Pornographers, Ted Leo and Aimee Mann.

Even after 13 years of volunteering, Scharpling admits to feeling uneasy about citing money as a reason for leaving The Best Show. Part of his hesitation comes from his background in rock music, he said, and the fear that some might see him as abandoning WFMU’s noncommercial, low-budget “punk” aesthetic.

“Nobody can ever be punk enough, in a way,” he said. “There’s always another level you can go to, to be more punk.”

Scharpling has not determined his post–Best Show plans and says he can’t think ahead until he’s wrapped up the program. But he hints that he will stay with the talk format in some form and continue working with Wurster.

“I’m not done talking into microphones by a long shot,” he said. “Maybe this is an opportunity for me to just be a free agent, out in the world with no ties to anything, and just see where my talent takes me.”

Freedman speculated that Scharpling might try a listener-supported podcast along the lines of Maron, Thorn and other talents now earning incomes from shows similar to Scharpling’s own.

After Scharpling’s departure, his time slot will be filled by comedian, podcaster and occasional Best Show guest Dave Hill, starting in January. Freedman picked Hill as a replacement who would be able to retain some of Scharpling’s listeners and sustain their financial support.

“I’m not going to try and replicate or compete with what Tom and Jon have done over the years, because that would be impossible,” Hill told Current. Hill’s new program will feature music, comedy, interviews, in-studio performances and, he joked, “as many appearances by Dick Cavett as I can talk him into.”

As Scharpling prepares to leave WFMU, he looks at upstart comedy broadcasters from the vantage point of a veteran.

“I see people do a show for a year and a half, and they’re already figuring out ways to actually monetize it, and then they’re complaining about how they can’t do it for free anymore,” Scharpling said. “It just makes me feel like, man, maybe I’m the crazy one.”

Watch Scharpling, Wurster, Ted Leo and others cover the Traveling Wilburys’s “Handle With Care” on The Best Show:

8 thoughts on “Rock, rot and rule: Best Show ends as Tom Scharpling looks to a life beyond WFMU”