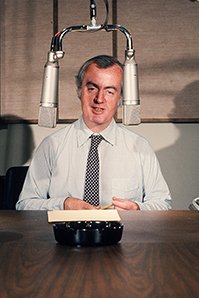 Robert Conley, the first host of NPR’s All Things Considered, died of parotid cancer Nov. 16 at his home in Virginia. He was 85.

As the host who inaugurated broadcast of NPR’s afternoon newsmagazine on May 3, 1971, Conley eschewed written scripts and delivered off-the-cuff intros to stories, while maintaining an air of professionalism. During ATC’s debut, Conley filled around six minutes of airtime while producers scrambled to bring a story on Vietnam War protests to the control room.

Conley came to NPR as a veteran journalist who had worked as a correspondent and newsroom manager for a variety of major news outlets, including NBC News, the New York Times, the Washington Post and National Geographic. He ran bureaus in London, Rome, the Middle East and Africa over the course of his career.

“He believed very strongly that language was the way to really sell a story on the radio or in the paper. And he was a very fine writer,” said Linda Wertheimer, who worked as Conley’s director during ATC’s first year, in an interview. As Conley’s penchant for ad-libbing on the air continued, “it was a little hair-raising” to not know how long he would talk, she said.  But “he had a really beautiful voice. . . . It was a rich voice, and beautiful for radio.”

Susan Stamberg, who began hosting ATC in 1972, described her predecessor as “much more eloquent than what we could write for him in 30 seconds . . . . He was not about making it sound like a scrappy little thing. He was a newsman.”

After NPR, Conley went to Voice of America, where he served as the network’s Training Director from 1975 to 1993. He was also a journalist-in-residence at George Mason University, and an avid F1 racing fan who traveled to every Grand Prix location, according to his daughter Shelagh.

ATC presented a remembrance of the former host during its Nov. 19 edition. “On his first broadcast, Conley established that this was a program that wanted to be different,” current ATC co-host Robert Siegel said.

Editor’s note: An earlier version of this article reported that Susan Stamberg succeeded Conley as ATC host. Two other members of the ATC staff, Jim Russell and Mike Waters, hosted the show before she became a co-anchor.
Please send obituary notices to lapin@current.org
ShareTweet EmailPrint More