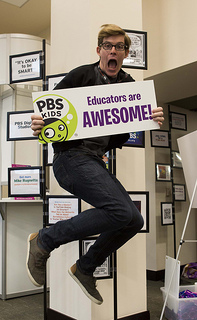 Joe Hanson, host of "It's Okay To Be Smart," at the South by Southwest Festival in April 2013. (Photo: Courtney Knox, Knoxy Photography)

Joe Hanson, host of “It’s Okay To Be Smart,” at the South by Southwest Festival in March 2013. (Photo: Courtney Knox, Knoxy Photography)

A PBS Digital Studios program is dealing with blowback from online viewers and the PBS ombudsman for using bobblehead dolls to caricature sexual harassment of scientist Marie Curie.

In the Nov. 11 episode of the irreverent science program “It’s Okay To Be Smart,” host and creator Joe Hanson welcomes bobblehead figures of famous scientists to Thanksgiving dinner and begins discussing how their scientific achievements reverberate in modern society.

In a running gag that escalates throughout the video, an Albert Einstein doll behaves inappropriately toward a Marie Curie doll. The Einstein doll begins by standing so close to Madame Curie that she complains of him breathing on her. By the end of the episode, Einstein has striped naked, knocked Curie over and assaulted her.

Neither the host nor any of other male characters depicted by bobbleheads, including Charles Darwin, Issac Newton and Nikola Tesla, comment on Einstein’s behavior, and Curie is portrayed as helpless.

The video, which has been viewed more than 57,000 times since its posting, drew swift criticism, as online commentators accused Hanson of making light of sexual assault and perpetuating negative depictions of women scientists. Hanson responded in an apologetic Nov. 17 blog post, saying he had intended the Einstein doll “to call attention to the sexual harassment that many women still today experience, often from wannabe Einsteins.”

He added, “We missed the mark in delivering that message, and for that I am truly sorry.”

Many viewers wrote to PBS Ombudsman Michael Getler, who weighed in with a Nov. 19 online column in which he agreed that the video was inappropriate. Getler also commended Hanson for his swift explanation and apology.

“What astounds me is that, while risk-taking is often to be applauded, this depiction of Einstein and Curie is so not funny, so off-the-wall, so not likely to be understood yet virtually guaranteed to anger a huge segment of a viewing audience for no good reason that one wonders how it was decided to show it,” Getler wrote. “On the other hand, in an era where clicks count the most, maybe it is not so dumb.”

Getler included a statement from PBS spokesperson Jan McNamara, who said, “With this video, Joe has opened up an important, though difficult, debate. We believe we are meeting our public service mission by providing an open forum where this and other conversations about complex subjects can take place.”

PBS Digital Studios content creators maintain a high level of creative control over their work, and produce videos with little oversight from the network. PBS’s official Twitter account publicized the “It’s Okay To Be Smart” video shortly after it was posted.

The video remains on PBS Digital Studios’ YouTube channel. Current has reached out to Hanson for comment.