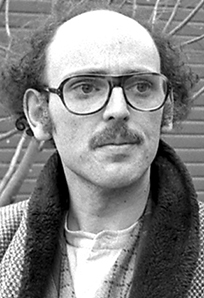 Maurice Bernstein, producer and host of one of NPR’s first nationally distributed music programs, Folk Music and Bernstein, died Nov. 9 at his home in Minneapolis. He was 74.

Known to friends as “Maury,” Bernstein was an expert on Scandinavian folk music, an avid accordion player and a big presence in the Minnesota folk scene, which nurtured many of the acts later spotlighted on Garrison Keillor’s A Prairie Home Companion. Bernstein’s program began airing on local stations in the early 1960s, and bounced around the dial before NPR picked it up for national broadcast in 1972, according to the Library of Congress’s catalog for the program.

“Maury was right at the forefront of what they call the ‘big folk scare’ of the early 1960s, where folk music really came into prominence with hootenannies and political rallies,” said Dick Rees, a musician who performed locally with Bernstein and occasionally appeared on his show. When APHC got its start as a local broadcast, Reese performed in the house band.  He described Folk Music and Bernstein as a forerunner to both APHC and West Virginia Public Broadcasting’s Mountain Stage, and credited Bernstein in part for their success.

“His importance in all of this, even if it was coincidental with some other things that were going on, shouldn’t be understated,” Rees said. “He inspired a lot of people.”

“He was a great man, no doubt about it, and brilliant, with total recall of vast knowledge about folk music and all sorts of things,” Keillor told Current. “Whenever he saw me, he always approached with a speech in his head. He had a lot to say.”

When Folk Music and Bernstein ended its national run in 1979, Bernstein joined the faculty of the University of Minnesota, teaching ethnomusicology from 1979-86. He continued to produce radio programs for local AM stations.

During the show’s heyday, Bernstein also co-founded and organized the Snoose Boulevard Festival in Minneapolis with fellow musician and university professor Anne-Charlotte Harvey. The festival, produced annually from 1971-77, drew more than 100,000 attendees its peak, according to the Minneapolis Bridgeland News. NPR aired a live broadcast of the second festival in 1973.

“Maury was irrepressible, a force for music, learning, fairness [and] justice,” Harvey wrote to Current. “He had much learning on numerous topics, all acquired because he loved knowing, not for gain of any kind. He had wisdom, he had kindness, he had passion for what he believed in.”

The family asks that donations be made to Friends for a Non-Violent World or the Anti-Defamation League.