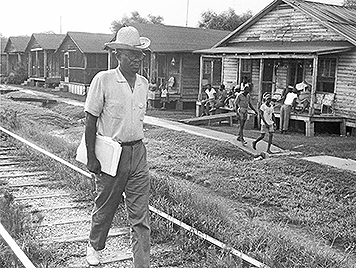 In the summer of 1964, more than 700 volunteers entered Mississippi to register African-Americans to vote. What began as a peaceful organizing movement quickly became subject to harassment, intimidation and violence as local law enforcement officials and members of the Ku Klux Klan resorted to arson, beatings and murder to thwart the registration and education campaign.

Freedom Summer, a documentary directed by Stanley Nelson, recounts the turbulent 10-week period, focusing on efforts by the Council of Federated Organizations and the Mississippi Freedom Democratic Party to enfranchise the segregated state’s black population. It airs June 2014 as part of PBS’s American Experience, marking the 50th anniversary of a pivotal moment in the civil rights movement and bringing historical resonance to civil rights issues in today’s headlines — such as the Supreme Court’s recent decision to overturn provisions of the Voting Rights Act.

Nelson, a recipient of a 2002 MacArthur Foundation “genius grant,” has produced many films for American Experience, including The Murder of Emmett Till (2002), Jonestown: The Life and Death of the Peoples Temple (2007) and Freedom Riders (2011), which examined a 1961 protest movement challenging Jim Crow laws in the Deep South.

In Freedom Summer, he revisits a chapter of the Civil Rights movement previously chronicled in Eyes on the Prize, the landmark 1987 PBS series once used widely in classrooms. Nelson recognizes that this key episode in the movement is ripe for a new treatment.

“For a whole generation, they’ve never seen anything about this story,” Nelson said. “I think there’s great value in being able to bore down and talk about more specific stories.”

During filming, Nelson interviewed surviving volunteers, government representatives and Mississippi residents who witnessed Freedom Summer firsthand.  William Scarborough, a professor at the University of Southern Mississippi, talks about his experience as a member of the supremacist Citizen’s Council.

Though the Supreme Court decision to roll back key provisions of the Voting Rights Act — announced in June — falls far outside the scope of Freedom Summer, the historical film will help viewers connect long-ago events to their lives.

“We went into it knowing how important this story is,” Nelson said. “And even if [the Supreme Court decision] hadn’t happened, this was still an incredibly important story. People died for the right to vote. And now we take it for granted … It’s important to understand what went into getting us there and what it was like before.”

One thought on “Film revisits Freedom Summer for a new generation”