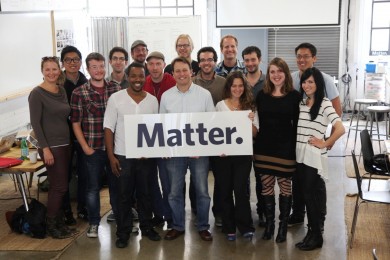 The seven startups selected by Matter to be a part of its second accelerator class participated in a boot camp last week at the outset of their four-month program. (Photo: Matter Ventures)

For its second class of startups, Matter Ventures is getting creative.

The seven startups selected by Matter to be a part of its second accelerator class participate in a boot camp last week at the outset of their four-month program. (Photo: Jigar Mehta)

The San Francisco–based startup accelerator, funded by KQED and the Knight Foundation and owned in part by Public Radio Exchange, announced Wednesday a new round of seven early-stage companies joining Matter Two. The first round comprised six startups who incubated at Matter from March to June.

The second group of participants began a four-month crash course in business development last week with a weeklong boot camp overseen by Matter CEO Corey Ford. Several of the startups cater to the creative arts, working with writers, performers and visual artists. Others focus on journalists, online publishers and users of social networks.

Each startup receives an initial $50,000 investment from Matter, along with collaborative office space in the accelerator’s San Francisco headquarters and a shot at attracting investors at the accelerator’s concluding Demo Day event, slated for February. Matter aims to cycle through two classes of startups each year, with each funding partner and part-owner earning an equity stake in the startups.

“I wouldn’t say that was the primary selection for us, to have [creativity] as a theme, but it ended up being a strong one that emerged as we selected our finalists,” said Jake Shapiro, CEO of PRX and a founding partner of Matter. As themes emerge throughout the application process, Matter seeks companies whose interests and goals complement each other, Shapiro said.

Matter required all applicants for its second round to create a profile on AngelList, a network for startups and entrepreneurs. Word of mouth from the first class drew applications from several startups outside the U.S. Europeans founded three of the startups chosen to participate.

Three of the six startups from Matter’s first round have secured follow-up investments, and two others are entertaining acquisition offers, Shapiro said. One startup, ChannelMeter, announced in June that it will join Turner Broadcasting’s media-startup incubator program.