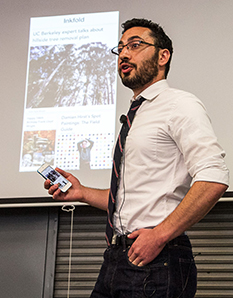 The six startups — ChannelMeter, SpokenLayer, Inkfold, Mixation, Zeega and OpenWatch — went through multiple strategic shifts over the course of the four-month acceleration program. One changed its name: The online video channel programmer that entered the program as “StationCreator” rebranded itself as “Mixation.”

Representatives from a host of venture capital firms attended Matter’s first “Demo Day” in San Francisco, and the event was “a kind of rite of passage” because it demonstrated Matter’s viability with entrepreneurs, according to Jake Shapiro, c.e.o. of Public Radio Exchange and a founding partner in the accelerator program. “The very visible result of it was a packed room of very interested and interesting people,” he said.

Finished products range from government watchdog tools for citizens (OpenWatch) to quick-turnaround audio versions of digital news stories (SpokenLayer). Each had received $50,000 to develop their ideas, in shared office space with a structured curriculum and multiple opportunities for collaboration.

Matter is a for-profit media startup accelerator funded through San Francisco’s KQED and the Knight Foundation. PRX is a key stakeholder and part owner. Corey Ford, a former Frontline producer, leads the program.

Each funder, as well as PRX and Matter itself, shares an equity stake in every company that comes through the accelerator, and KQED has already incorporated two of the finished products into its operations — Zeega, a platform for mixing snippets of multimedia content creatively, and ChannelMeter, a YouTube data tool.

Though Matter is for-profit, its backers insist every startup that enters its program share public media’s values. “What we have said all along is that we’re looking for entrepreneurs who share the values of public media and whose products or technology is something that you can imagine being used by public media, or being used to further the mission of public media,” KQED President John Boland told Current.

Matter’s financial plan allows backers to provide additional support to any of its companies, but Ford said that will only happen if Matter raises more funds. The $2.5 million from Knight and KQED is to be spent on operating the accelerator program for two years, he said.

But Matter will continue to support its first class of startups. It will host a July 23 showcase in New York for media executives and additional investors to view the presentations. Representatives from both public and for-profit media companies will be invited, Ford said.

“We would absolutely be inviting public media people from New York, but it’s not just about them,” he said.

The six startups can continue using Matter’s office space until the New York event, at which point they become the first companies to officially join Matter’s “alumni network,” Ford said. Matter will continue to advise them as companies within its portfolio, he added.

Boland, meanwhile, looks to import Matter’s “design thinking” ideas into KQED in a larger way by creating an internal idea incubator called KQED Lab. Eyeing a potential launch for next year, Boland says the lab would serve as a collaborative environment for managers and employees to conceive and develop ideas for the station, such as its recent Pledge-Free Stream experiment.

“It’s really about tapping into the Silicon Valley innovation ecosystem so that KQED can learn and benefit from that, and further the innovation within our own organization,” Boland said.

Though no investments or major deals came out of Matter’s Demo Day, each of the startups announced their intentions to fundraise for seed investments. One has already secured a place in a new class of media startups: On June 19, Turner Broadcasting selected ChannelMeter to join four other companies in its 12-week Turner Media Camp incubator.

Matter is currently seeking applicants for its second round of startups. Applications are due July 28 for Matter Two, which launches Oct. 7.