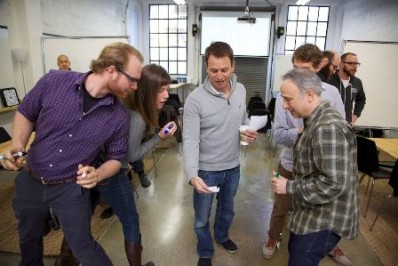 Matter, the San Francisco-based media start-up accelerator backed by the Knight Foundation, KQED and the Public Radio Exchange, today announced the six companies that will be participating in its inaugural class.

Each team receives $50,000 in funding as the they work toward the June 13 “Demo Day” for potential investors. Matter will also hold a design review session every month, where participants will present their progress to outside consultants. The news release announcing the class said the participants “reflect Matter’s mission to fuse the values of public media with Silicon Valley entrepreneurship.”

When Matter was officially announced in December 2012 — rebranded from its previous incarnation as the “Public Media Accelerator” — the initial plan had been for the accelerator to house four rounds of five teams each over two years.

“We were just really excited about the vastness that we got,” said Corey Ford, Matter c.e.o., in an interview. Matter looked for companies with early-stage functioning prototypes or services in place, but also took the teams’ potential for interacting with each other into consideration.

“It’s not just on an individual level in terms of start-ups,” Ford said. “We’re not angel investors. We’re not just giving grants like the news challenge. We’re bringing the community together so you have to think about what does that community look like.”

Among the start-ups, Zeega is most familiar to public media. Creators of the platform have already produced stories for NPR and contributed to several projects in the Association for Independents in Radio’s Localore initiative. The company received a $420,000 Knight News Challenge grant in summer 2011.

Ford said Zeega was an appealing candidate to Matter because of the company’s plans for a “very big strategic pivot” from a Boston-based consulting company to a San Francisco-based direct-to-audience tool. Zeega was the only company Ford had heard of prior to Matter’s application process.

Another, audiophile-friendly start-up, SpokenLayer, turns written news articles on the web into spoken-word audio read by professional actors for podcast-style listening. SpokenLayer is already partnering with several big-name publishers, including Associated Press, the Atlantic and the New Republic. The way SpokenLayer repurposes online content is similar to that of another member of Matter’s first class: InkFold, an iPhone app that aggregates various news sources into a layout that visually resembles a print newspaper. Ford said the founders of InkFold also plan to incorporate a social layer.

The remaining three start-ups focus on incorporating video, although in vastly different ways. ChannelMeter, a service that tracks the popularity of YouTube channels, is intended primarily for brands and publishers to more efficiently monitor their presence on the platform. StationCreator, by contrast, is a consumer-oriented service for programming a “personal TV channel” made up of web video and streams. The social-justice-minded OpenWatch is a citizen journalism network that encourages people to upload recordings of misbehaving authority figures, and connects them with the best outlet through which to publicize their watchdog reports.

The products the companies produce are not as important to Ford as their stated ambitions. “It’s more about the verbs than the nouns,” Ford said.

For the next four months, all six start-ups will use Matter as their operations base. One exception will be SpokenLayer, which will maintain its New York office concurrently because of the company’s ongoing affiliations with New York-based publishers. Zeega, which has five employees participating, has the largest footprint within Matter.

This post has been revised to identify Corey Ford as c.e.o. of Matter.
Questions, comments, tips? lapin@current.org
ShareTweet EmailPrint More