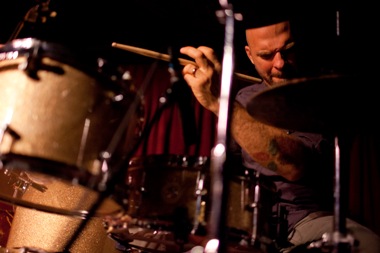 Dave King, drummer for the experimental jazz ensemble The Bad Plus, brought his modern jazz trio to New York this month, NPR Music and WBGO produced a live videostream of their Sept. 11 performance.Their Live at the Village Vanguard session is a model for the forthcoming web-original series Jazz Night in America. (Photo: John Rogers/WBGO)

NPR and WBGO-FM in Newark, N.J., are teaming up to produce Jazz Night in America, a series of radio broadcasts paired with live, high-quality video webcasts of jazz performances from venues across the country.

The series will debut in April 2014, said Anya Grundmann, e.p. of NPR Music, who discussed the project with jazz programmers during a Sept. 18 conference session at the PRPD conference. Videos will stream on NPR’s and WBGO’s websites, and stations will be able to install a video player platform on their own sites to present the webcasts with their stations’ brands prominently displayed.

The series will mark the most prominent visual presentation of live jazz performance in U.S. broadcasting since CBS presented concerts in the 1950s, said Josh Jackson, v.p. of content at WBGO. It would also be public radio’s first regular video series, Grundmann said.

When Dave King, drummer for the experimental jazz ensemble The Bad Plus, brought his modern jazz trio to New York this month, NPR Music and WBGO produced a live video and audio stream of their Sept. 11 performance. The Live at the Village Vanguard session is a model for the forthcoming web-original series Jazz Night in America. (Photo: John Rogers/WBGO)

WBGO and NPR Music have already been collaborating to produce videos of live jazz performances from the Village Vanguard in New York, the Newport Jazz Festival and other locations. The videos have featured a chat function that viewers can use to discuss the music while they watch, an interactive feature to be adopted by Jazz Night in America.

The quality of the video streams will be good enough to allow viewing on large screens, Grundmann said, but viewers can also watch on smartphones and tablets.

To expand viewership of the series, NPR is working to enlist music teachers to show the videos to students. Online jazz classes might even be developed to accompany the videos, and NPR may approach PBS about airing the performances as well.

The network is in discussions with potential venues, including the Village Vanguard, Jazz at Lincoln Center in New York and the Kennedy Center in Washington, D.C. Audio from the sessions will be broadcast on JazzSet, WBGO’s weekly radio show distributed by NPR.