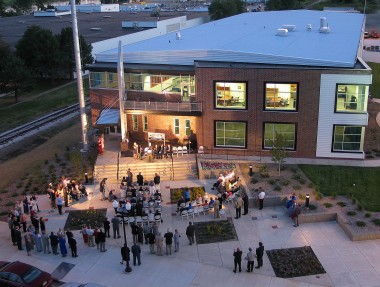 WTVP celebrated the opening of its new broadcast center at the Peoria, Ill., riverfront in September 2003. Since the gala, the community licensee has weathered and recovered from a serious financial crisis. Now its top manager is working to build new cost-sharing partnerships with WILL in Urbana-Champaign, a university-owned joint licensee 90 miles southeast in Peoria. (Photo: WTVP)

Chet Tomczyk is getting to know Interstate 74 in central Illinois quite well as he drives the 90 miles between Peoria and Urbana twice weekly in a unique public broadcasting experiment with collaboration.

For the next several months, Tomczyk is doing double-duty as general manager of Peoria’s WTVP, a community licensee, and WILL, a joint licensee operated by the University of Illinois at Urbana-Champaign. The arrangement grew out of a neighborly collaborative relationship between the stations as well as a desire to save personnel costs.

The timing was also fortuitous. Tomczyk had decided to set his retirement for June 2014, just as Mark Leonard, WILL g.m., accepted the top job at Nebraska’s NET, leaving each station to consider what it wants and needs in its next leader.

When the idea surfaced to share one executive on an interim basis, Tomczyk’s name emerged, Leonard said. Tomczyk doesn’t want the job on a permanent basis, and, as a pubcaster with more than 40 years’ experience, he could form unbiased opinions on the pros and cons of the concept.

Tomczyk’s role is not to simply oversee the stations, “but rather to try some things that may inform future decisions for both,” Leonard said. “If there are successes during this period, and a level of comfort, and savings, both organizations will be thrilled. But because this is not a binding agreement, each also has an out.”

So far, there’s no talk of a full-out merger; it’s “much, much too early to even speculate on a marriage — we just started dating,” Tomczyk said.

Jan Slater, dean of the College of Media at U of I, said each licensee will analyze the dual-interim concept over the next 120 days. “We’ll think carefully about how it’s working, and we’ll be in constant conversation about it,” Slater said. “I think by the first of the year we’ll both have a feeling about how we want to pursue the position,” either by searching for a permanent g.m. to oversee both stations, or by deciding to hire new managers for each.

Tomczyk, who began wearing two hats three weeks ago, said the plan is going well so far. He’s getting to know the culture and personalities at WILL, and planning “field trips” for staffs to familiarize themselves with each other so they can offer input on joint projects.

“Right now the roads are good, there’s not a whole lot of construction and the weather is perfect,” Tomczyk said of his new commute, adding, “We’ll see what happens this winter.”

Tomczyk has worked at WTVP for 19 years. He arrived in Peoria as development director in 1994 and rose to president and c.e.o. in 1996.

The station’s TV signal overlaps with WILL’s in Bloomington-Normal — but that’s not an issue for the two pubcasters in central Illinois. “With Bloomington-Normal between us,” Tomczyk said, “whenever we get ad dollars from PBS it doesn’t make a lot of sense for both stations to do ads for the same program in the newspaper, so we do one ad with both logos.”

While some stations in adjacent or overlap markets have tense relationships, “we’ve always been positive and collegial,” Tomczyk said. He worked with Leonard at WXXI in Rochester, N.Y., in the 1980s, and Tomczyk had a good working relationship with Leonard’s predecessors at WILL, Carl Caldwell and Ellis Bromberg.

The two stations co-produce Illinois Lawmakers, providing legislative coverage for pubTV stations statewide, and have partnered on various projects in the past.

As president of the Illinois Public Broadcasting Council, Leonard said he was “gently trying” to lay the groundwork for more collaboration between the state’s 20 PBS and NPR member stations. They succeeded in launching the Illinois Edition of PBS Learning Media, a free online resource for K–12 educators. But additional partnerships proved untenable: Executives from stations in some overlap markets didn’t get along, and the deeply rooted and contentious “Chicago vs. downstate” culture that Illinois has always struggled with came into play.

Leonard and Tomczyk decided to focus specifically on building ties between their stations by looking at how one’s strengths could bolster the other’s weaknesses.

There are indeed differences. WTVP’s full-time staff is about a third of WILL’s. WTVP outsources its business and engineering duties, while WILL employs staff to carry out that work. WILL is part of the Digital Convergence Alliance, a master control centralcast hub in Jacksonville, Fla.; WTVP is not.

The Peoria station’s operating budget is around $3 million; it struggled mightily during the recession, nearly collapsed under long-term debt in 2008 and was finally rescued by an emergency loan from CPB and $2 million in community contributions. Its finances are now stable.

The Urbana station’s budget tops $6 million; just over $1 million is provided annually by the university. Its funding was stable during the financial crisis and recession.

WTVP has a much larger studio than WILL, as well as a mobile production vehicle and satellite truck. WILL produces local programs including Mid-American Gardener and Illinois Pioneers, celebrating people and places. WTVP’s productions include At Issue, a public affairs show, and Illinois Adventure, a travelogue.

And WILL’s close affiliation with a major university means “a wealth of content is sitting at our back door,” Slater said. One example: Recently, U of I provided additional research funding to six university scholars to undertake diverse projects. “They are doing incredible things,” Slater said.

As a community licensee, WTVP has the flexibility to act on decisions more quickly than WILL, which must work through layers of U of I bureaucracy, Tomczyk said. But the university’s stewardship of WILL offers more financial stability.

‘This is not happening in a vacuum’

As former colleagues and neighboring pubcasters, Leonard and Tomczyk had a longstanding tradition of meeting for lunch once every quarter. This spring, the conversation turned to their plans for succession. Slater had already begun discussing WILL’s future with Leonard, and agreed to have lunch with both execs.

Slater initially floated the idea of a double- duty executive.

“We knew that, for an interim, we needed someone who had lots of experience, knew WILL and understood the State of Illinois and its public broadcasting scene,” Slater said. “That was Chet.”

The process of hiring Tomczyk took about seven weeks — lightning speed for a major university. “His board was fabulous,” Slater said. “I had to work through all the intricacies at the university.” A staffer in the university’s legal department complimented Slater for “trying something new” but then quickly added, “We’re just not used to this, so we have to figure out how to do it.”

The contract was crafted to give both organizations an exit strategy at any point if the plan wasn’t working to their satisfaction.

Tomczyk signed a confidentiality agreement but did reveal that his compensation from WTVP dropped when he “essentially became a 49-percent employee of U of I, with a salary commensurate with that.” He’s earning a little more than he did running WTVP full time, “which makes the extra time and effort worth it,” he said.

He’s still working through the challenges of scheduling his time, which will be one key to his success at both stations. Tomczyk anticipates “something along the lines of three days in one place, two in another, rotating each week and adjusting accordingly to the needs of the organizations,” he said.

Leaders at both organizations recognize that challenges lie ahead if they are to continue to strengthen ties between the two stations. “This deals with cultural change, and that’s tricky,” Leonard said.

Tomczyk has discovered that staff members of each station think of each other as “bigger, smarter, stronger and faster. Part of his challenge will be bringing two staffs together.” He has advised staffers at both outlets to get to know each other and how the other station is set up. “I need their expertise and suggestions.”

Another possible pitfall is how pubcasters at other Illinois stations perceive the deal, Leonard said. Will it lead more pubcasters to collaborate in the future, he asked, “or could stations see this as a threat to independence? It’s hard to predict how this will be received.”

Jerry Gruebel, president of community-licensed Network Knowledge (WMEC in Macomb, WQEC in Quincy and WSEC in Jacksonville/Springfield), said he is “intrigued” by the concept of a dual g.m. “I think both Chet and WILL are trying to be creative,” he said.

“They’re drawing strengths from each other, and filling in gaps in their weaknesses,” Gruebel said. “Bravo if it works.”

Leonard believes there is a “reasonable possibility” that the shared g.m. position will be adopted permanently. “I don’t have any odds on what will happen, but I’m pleased it’s gotten this far,” he said. “This has elevated the discussion to appropriate levels and given both organizations the opportunity to do some meaningful long-range planning.”