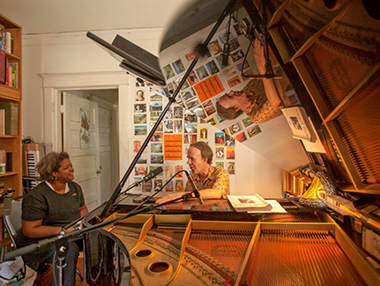 Or at least not the abundantly soulful music of New Orleans, if the journalist is Gwen Thompkins. Even when Thompkins was reporting from East Africa for NPR, she found ways to work musical motifs into coverage of nonmusical topics. For one story, she asked South Africans to compare their country’s presidential contenders to Miles Davis songs. Jacob Zuma, current president, was likened to “Bitches Brew.”

During her 16 years away from her hometown, Thompkins also worked as senior editor for NPR’s Weekend Edition Saturday and served as a Nieman Fellow at Harvard. Now she’s back in New Orleans with a new gig that no longer requires her to stretch for musical angles: She hosts Music Inside Out with Gwen Thompkins, a weekly show about Louisiana music. The program airs on WWNO in New Orleans, but Thompkins is angling to build the show’s carriage on stations around the country.

Thompkins started Music Inside Out as she was looking to support herself with freelance income while beginning to write a book. When she returned to New Orleans, WWNO was preparing to switch to a newsier format and wanted to include locally produced programs. General Manager Paul Maassen approached Thompkins about hosting a current affairs show.

“I wished him luck, but I had been away for 16 years, and I had no idea what was current,” she says, unleashing a characteristically loud and long belly laugh familiar to anyone who’s heard her show. “But I said I could do a music show, because I love music, and it’s more fun to talk about than just about anything.”

Maassen gave her the go-ahead, and Music Inside Out was born. On most episodes, Thompkins interviews Louisiana musicians about not just their own music but their influences and favorite tunes, with live performances and excerpts of songs dropped in as illustration. Other episodes center on themes such as food, betrayal or film music.

With its musical focus and point of origin, the show invites comparisons to the longer-running and better-known American Routes — in fact, Music Inside Out producer Jason Rhein formerly worked as technical director for that show. But it stands apart with its longer-form interviews and tighter focus on Louisiana music. With a full hour devoted to each musical guest, the musicians can talk in-depth about their work, and they enjoy the rare opportunity to do so, Thompkins says.

Even well-known musicians face worries and have difficulty gauging their own success, Thompkins says. “I remind them to fall back in love with themselves.”

Thompkins is not a musician herself, and often her first meeting with her guests is right before their interviews. But her curiosity and game attitude carries her along. One show found her joining New Orleans songwriter and multi-instrumentalist Jon Cleary in a spirited duet of the jazz and pop standard “A-Tisket, A-Tasket.”

When approached about hosting a current affairs show for New Orleans’s WWNO, Thompkins said she wasn’t interested. “But I said I could do a music show, because . . . it’s more fun to talk about than just about anything.” Station chief Paul Maassen took her up on the idea. (Photo: Gregg Goldmann)

In one instance, she had met a guest previously, and quite by accident. She had been driving around New Orleans and passed the legendary performer Allen Toussaint standing on the street. She drove back around the block and chatted him up for a while.

Months later, when she called him to ask him on the show, she asked if he remembered her. “Of course,” he said, and immediately agreed to an interview.

“It was one of those great moments,” she says. “When you’re in a town this small, you can run into people who are your idols. And maybe because the town is so small, and because it is New Orleans, your idols will be nice to you.”

When she visited Toussaint at home and joined him on his piano bench, he asked, “What would you like me to play?” “I thought, ‘There’s nowhere else on earth I’d like to be at this moment,’” Thompkins says.

Most of Thompkins’ guests have been based in New Orleans, but she’s also traveled to Lafayette, La., to interview Taj Mahal and other performers. She hopes to travel more around the state and place Music Inside Out on stations elsewhere in Louisiana, as well as in other states. So far, it’s only on WWNO, though NPR shows have tapped Thompkins for interviews, playlist and musical recommendations.

Yet she has succeeded in crossing international borders—Music Inside Out also airs on CIUT, a community radio station operated by the University of Toronto. The arrangement came about thanks to former NPR news veep Jeffrey Dvorkin, who emailed Thompkins about bringing the show to his city.

Striking out on her own, and in a long-form way, has required Thompkins to listen to her own voice more than she might like. “If I hear myself laugh one more time, I think I’m going to sew my mouth shut,” she says (and she does laugh a lot). But there’s also been an upside.

“My experience so far has confirmed that sometimes you have to do your own thing and invest in yourself,” she says. “If you have something to offer, offer it on your own terms. Maybe if you work hard enough, people will respond.”