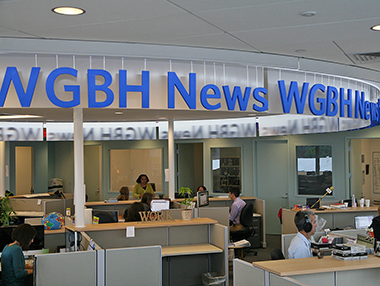 On Sept. 23, NECIR moved into the WGBH newsroom. (Photo: WGBH)

Boston’s WGBH is bolstering its investigative reporting capacity through a new partnership with the nonprofit New England Center for Investigative Reporting.

NECIR, founded in 2009 at Boston University, moved its journalists into WGBH’s local newsroom Sept. 23, where they will participate in editorial meetings with WGBH’s news team and potentially gain more national exposure through in-house production units such as Frontline and Public Radio International’s The World.

The two organizations also plan to jointly hire one investigative reporter who will work across radio, TV and digital journalism platforms.

Along with Joe Bergantino, NECIR executive director, NECIR’s small news staff includes Investigations Editor Ted Gup, author and former Washington Post reporter; Jenifer McKim, a former Boston Globe reporter and Nieman Journalism Fellow who recently joined the center as assistant managing editor and senior investigative reporter; and a handful of freelance and student reporters. In addition to the joint hire to be recruited with WGBH, NECIR plans to announce the hiring of another Boston Globe reporter next month, who will start in November.

WGBH’s newsroom boasts 42 local “content producers,” including 16 full-time reporters, among producers and on-air talent for both TV and radio programs.

WGBH and NECIR had been discussing possibilities for a partnership since the center’s inception, according to Bergantino. WGBH has been a frequent customer of NECIR’s news reporting, which is syndicated to local and national outlets.

At the same time, WGBH has been working to expand its local newsgathering and investigative capabilities, said Phil Redo, g.m. of WGBH Radio.

“As we’ve grown our commitment to local journalism, we also were looking at opportunities to fill in areas that we thought were underrepresented, one of which was investigative,” Redo said. “We each have our own business models that we’re pursuing. The difference is that we’re pursuing them under one roof at this point.”

NECIR will maintain close ties to Boston University, where it provides training to journalism students in the College of Communication. The college contributes $60,000 toward the center’s annual operating budget, and will continue to do so.

The university supports the move, Bergantino said. “It makes sense on multiple levels … to be in a professional newsroom, to be associated with a newsroom with radio and TV capability.”

Under the new partnership, WGBH will provide in-kind contributions such as rent-free office space and other resources; it will also cover 60 percent of the cost of the new investigative reporter.

NECIR’s budget for FY14 approaches $880,000, 45 percent of which is to be earned through its training programs, 35 percent from foundation grants and individual donations and 20 percent from content sales and Boston University’s contributions.

Editor’s note (9/25/13): This article has been revised to include new details of NECIR’s hiring plans and its budget for fiscal 2014.
Questions, comments, tips? lapin@current.org
This article was first published in Current, Sept. 23, 2013.
ShareTweet EmailPrint More