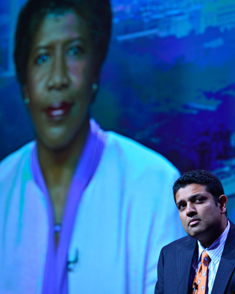 Public TV stations are backing PBS’s first foray into weekend news by committing airtime to PBS NewsHour Weekend, which debuts next month, although several program directors question PBS’s decision to invest in the broadcast when its flagship weekday program is struggling financially.

In an email survey by Current, a majority of content executives at 52 stations reported their scheduling commitments to run the show at either 5:30 or 6 p.m. local time, aligning it with weekday broadcasts of PBS NewsHour. Most expressed support for extending public television’s news presence into weekends, with several noting that the omission of news has been a critical shortcoming of pubTV lineups.

Beth Hoppe, PBS’s chief programmer, was “actually excited” to see PBS carriage reports that the show is running in all top 30 markets, she told Current during last week’s Television Critics Association Summer 2013 Press Tour in Los Angeles. PubTV stations have had wide latitude in programming Saturday and Sunday schedules, she noted, “so we’re asking them to do something in a space they feel proprietary about.”

“We want to begin to experiment with some things that we have talked about for a long time but haven’t been able to quite figure out,” Kerger told Current during the press tour. “Perhaps we’ll try some different ideas and formats on the weekend broadcast and really use it as an opportunity to think fresh about what can help the NewsHour begin to evolve into a news service on a nightly basis that is truly engaging and meeting the needs of the public.”

When the network began to “really talk about what we can do in public media that is different and unique,” Kerger said, “we felt that ending our nightly news service on Fridays and then not coming back until Monday felt like a big hole.”

Others have also questioned why public TV’s news programs disappear after Friday nights. “I’ve had viewers inquire for years as to why PBS doesn’t offer news seven days a week,” said Dale Wagner, p.d. at WCNY in Syracuse, N.Y. “They’d say that news doesn’t stop on weekends, and local and national news often gets preempted due to sporting events.”

Jeff Hanks, program/production manager at Lakeland Public Television in Bemidji, Minn., agreed. “Our viewers still consume news content over the weekends,” he said. “Why not give them a quality news source and brand that they trust on Saturday and Sunday as well?”

But some programmers are wondering why PBS is investing $3 million in the weekend show (a figure reported by the New York Times, which PBS officials declined to verify) when the production unit of its flagship weekday program is struggling financially. MacNeil/Lehrer Productions announced in June that it will drop 10 positions and close two of its station-based news bureaus.

The expanding footprint “seems ill-timed with the budget cuts that just happened at the NewsHour,” said Scott Dwyer, p.d. at KQED in San Francisco. The Northern California station had been home to one of the shuttered NewsHour bureaus.

“NewsHour is the standard bearer for news and public affairs reporting, no question,” said Garry Denny, p.d. at Wisconsin Public Television. “But that show itself could be freshened. Any money spent on the weekend show is better spent on the weekday.”

Besides, Denny said, the number of viewers for weekend television news shows is miniscule. “It’s a game that public television can ill afford to get into.”

Indeed, weekend news programs on commercial networks aren’t ratings winners, said Douglas Ferguson, professor in the Department of Communication at the College of Charleston in South Carolina. He spent 13 years as a programmer and manager of an NBC affiliate in Ohio and is co-author of Media Programming: Strategies and Practices, now in its ninth edition.

Commercial networks produce weekend news programs “for the seven-day presence,” not for ratings, Ferguson said. “They’ve got the studios and the people, and can stockpile stories during the week.”

But he endorses PBS’s move to add weekend news, especially if producers and programmers use the program as a testing ground for modernizing the hourlong weekday program.

“NewsHour has been criticized for years for being slow — dare I say, boring,” Ferguson said. “As their audience ages, the program needs to do something to stay alive.”

Ferguson pointed to another key talent decision: The choice of Hari Sreenivasan, NewsHour’s 39-year-old digital-savvy newscaster and correspondent, as host of the new weekend series. His prominent role could draw a younger audience and help to revitalize the brand, Ferguson said.

But KQED’s Dwyer doubts that a new host will make much of a difference. “To expand and get a younger audience, NewsHour would be better served focusing on radio and online, not TV,” he said. “Unless they are going to make their version of The Daily Show with Jon Stewart, the younger audience is not getting their news from TV.”

Idaho PTV’s Ron Pisaneschi, a veteran programmer recently promoted to general manager, is among those backing the weekend show as a laboratory for defining pubTV news of the future. “Honestly, I think taking this opportunity to do some Petri-dish stuff is great,” he said. “I hope we can use the weekend show to inform and infuse the weekday show with new approaches.”

Already producers for the weekend broadcast have embraced one program element that previously has been a source of conflict between stations and NewsHour: local news inserts.

Several programmers welcome the opportunity to present their own local news reporting around the 23-minute mark within the national broadcast. “We hope to take advantage of that option,” said Tom Hungate of KWSU-TV in Pullman, Wash.

Rocky Mountain PBS, which recently merged with the nonprofit I-News Network, is exploring ways to produce content for the inserts, according to Debbie Brennan, program manager.

Idaho PTV doesn’t cover daily news, but it does report on environmental issues as part of EarthFix, the CPB-supported Local Journalism Center in the Northwest, Pisaneschi said. Inserts in PBS NewsHour Weekend will be “a nice outlet for those reports.”

Most airing show on main channel

In an email survey sent to 156 programmers, Current requested details of how they’d scheduled PBS NewsHour Weekend and invited them to comment on the news expansion.

Of 55 respondents, 38 reported that they had placed the show on their main broadcast channel. Two exceptions are KCTS in Seattle, which is “committed to finding a place for it,” according to Randy Brinson, executive director of programming; and WKNO in Cordova, Tenn. PBS’s allotted broadcast window of 5 to 8 p.m. is problematic for WKNO, according to Debi Robertson, programmer.

Nine stations indicated that they will run the weekend program on secondary channels. KQED is the only station running it on the main channel (5:30 p.m. both weekend nights) and multicast (KQED World at 6 p.m. both nights).

WGBH in Boston will air PBS NewsHour Weekend on Channel 44, its secondary broadcast service, which has “a special focus on public affairs,” according to Michael Raia, spokesperson. “We dedicate an entire evening of public affairs programming on WGBH 44 every Friday. NewsHour Weekend fits in with that commitment.”

“This is innovation by one of the longest-running TV programs on our air,” he said. “We’ve been pining for innovation from the icon shows since [NewsHour co-host Robin] MacNeil was still on the air.”

“If stations do not embrace this opportunity,” Decker added, “then NewsHour Weekend will be short-lived. Stations won’t carry it, and it will die on the vine, and we will kvetch about the lack of risk-taking by our program producers.”

One thought on “PubTV commits to weekend news show”