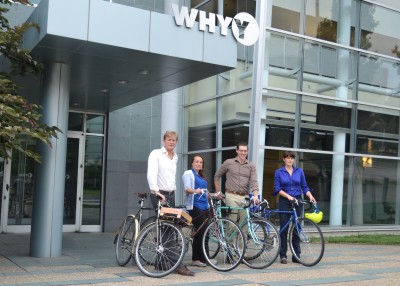 Bikes are a popular mode of transportation among staff at WHYY, where more than half of 20 reporters in the newsroom ride to work and to assignments. From left: Peter Crimmins, Lindsay Lazarski, Shai Ben-Yaacov and Elizabeth Fiedler. (Photo: Esmé Artz)

Emily Corwin of New Hampshire Public Radio wheels through the flat Seacoast Region in the southwestern part of the state, while Bryan Goebel and Andrew Stelzer tackle the steep hills of San Francisco’s Bay Area for KQED. NPR White House Correspondent Ari Shapiro jumps aboard his hybrid Jamis to buzz around Washington, D.C., often to the White House or Capitol Hill.

And nearly half of the 20 reporters in the newsroom of Philadelphia’s WHYY use their bicycles to cover stories, said Esmé Artz, spokesperson — so many that the station now provides helmets to cyclists on staff.

While the cycling reporters are unanimous about the benefits of biking —easy access to locations difficult to reach by car, no worries about parking and the ability to move through congested traffic — they’re still in a tiny minority of employees who use bikes for their jobs, according to Andy Clarke, president of the League of American Bicyclists, which has been advocating for cyclists since 1880. Few if any hard statistics exist on use of bikes during the workday, Clarke said; he guesses that number would be “very small.”

“Anecdotally,” Clarke said in an email, “we do hear about all kinds of great uses of bikes by people in a wide variety of emergency-service jobs (fire, crowd control, emergency medicine), local government services (parking control, housing inspectors) and things such as real-estate agents and food-delivery services.”

Depending on the beat, a bicycle can be a natural asset for a reporter; that’s certainly the case for KQED’s Goebel, who covers transportation issues. “One of my favorite things to do,” he said, “is to take a camera and audio equipment and just hit the streets to talk to people. That’s so easy on a bike.”

Goebel arrived at KQED four months ago. Previously, he was editor of Streetsblog SF, a site covering bicycle, pedestrian and transit issues.

“On my bike, I notice changes on the streets that I don’t always hear about from the Municipal Transit Agency,” he said. “There’s a new bike lane here or a new crosswalk there. That’s of interest to our listeners because the bike population here is growing.”

No fancy cycle for him, Goebel uses a sturdy five-gear 1964 Schwinn Collegiate that he first rode as a loaner during a 2009 bicycling summit in Wisconsin.

To carry her reporting gear as she cycles to assignments, NHPR’s Emily Corwin installed a pannier on a bike that was custom-made for her mother in the 1970s. (Photo: Corwin)

NHPR’s Corwin also rides a vintage bike, one that holds sentimental value: Her father gave it to her mother as a thank-you gift when she relocated from California to Colorado for his medical residency. “It was custom-built for my Mom in the 1970s,” Corwin said.

Corwin moved from Concord to the Portsmouth station about a month ago, fresh from a short stint on NPR’s StateImpact project, where she reported on New Hampshire’s business and economy. She covers news in several towns in the Seacoast Region. “It’s at ocean level, so it’s really flat,” she said.

In her experience, the sight of a reporter showing up on a bike to cover a story can put sources at ease: “They may be more willing to open up, because they don’t see me as just another predatory media person.” However, Corwin said, the image of a journalist on an old bike also seems to fit some preconceived notions of pubradio reporters pedaling around in their Birkenstocks to save the environment and the world. “If I show up for an event with, say, a conservative GOP senator, he may think, ‘Oh, those NPR people,’” she said.

Stelzer, a producer with the social-justice oriented National Radio Project in Oakland and part-time reporter for KQED, values the anonymity that a bike provides. “It’s been good for covering Occupy protests and marches around downtown, especially if I want to quickly go from one to another,” he said. “I don’t have to worry about street closures, and I can be inconspicuous. A bike gives you ‘regular person’ credibility.”

A couple of weeks ago, Stelzer covered an 11 a.m. press conference at the San Francisco’s Hall of Justice, then another event at City Hall, about a half-mile away, at noon. “There’s no way I could have made it in a car, because I’d have to look for parking,” he said.

On the job, on a bike

Parking can be a major headache for Peter Crimmins, WHYY’s arts and culture reporter, who often covers events in busy downtown Philadelphia. His bike came in especially handy in May 2012, when the Barnes Foundation’s historic art collection moved to its new site in Fairmount Park on Franklin Parkway — a major story for the city’s arts community.

KQED’s Bryan Goebel, who rides a vintage bike, uses a big wire basket to hold all the equipment he needs to cover his transportation beat. (Photo: Goebel)

“You just can’t park a car on the Parkway in the middle of the day,” Crimmins said. “You can’t take a train, and trolleys don’t go in that direction.” By bike, however, it’s an easy 10-minute commute from WHYY’s headquarters on Independence Mall near the city center.

His six-gear Fuji — modified for street riding with fenders, a chain guard and fat tires — is also handy for covering an ongoing story about artists revitalizing vacant lots throughout the city using grants from the Philadelphia Redevelopment Authority’s FACE (Fund for Art and Civic Engagement) initiative.

While most pubcasting journalists ride bikes to travel to and from various locations, some pedal as they are newsgathering. In July, Stelzer illustrated how many commuters switched to riding a ferry line during a transit strike by holding aloft a video camera as he rode along the queue. From the beginning of the line to its end, his video rolled for more than three minutes.

Earlier this month, as part of a long-term project, Crimmins recorded himself pedaling along the East Coast Greenway, a 2,500-mile path linking East Coast cities from Maine to Florida that has been under construction since 1991. His goal is to cover about 80 miles, from Wilmington, Del., just south of the Pennsylvania border, to Trenton, N.J., north of Philadelphia. “I wanted to record on my bike to give the story some color,” he said.

With the recorder in his backpack, he steered with one hand and dangled the mic toward the ground. Various trail surfaces created different sounds. “Part of the story is how the trail changes from asphalt to crushed rock, so you can hear me trying to pedal over that.”

Every mode of transportation has a downside; for cyclists it’s exposure to the elements, such as summer’s heat. Pedaling to a story can leave a cycling reporter sticky, especially during a District of Columbia summer, Shapiro lamented. He, who most often rides in a suit and tie. “Sometimes I show up, and it’s like a swamp outside, and I can’t stop sweating,” he said.

Distance is another challenge. That’s why pubcasting reporters in Portland don’t take to the streets on bikes, even though the city is famous for being bike-friendly. “We don’t routinely have any reporters who are bicycling to and from stories,” said Morgan Holm, s.v.p. and chief content officer at Oregon Public Broadcasting.

And there’s rain. While riding to a breakfast meeting a few years back, “the skies opened up,” Shapiro said. “I showed up at the hotel completely drenched.” That story had a happy ending, as the valet parking attendants offered to park his bike and even took his suit jacket, returning it later nice and dry.

Accidents are an ongoing hazard. Just this month, Corwin took a nasty tumble over her handlebars, landing on her face, after her shoulder bag became tangled in the spokes of her front wheel. “It was the first accident that landed me in the hospital,” she said. “Miraculously, I was fine, just a chipped tooth.”

Cycling reporters hope that their preferred mode of transportation will someday become a more commonplace sight. But for now, they elicit puzzled gazes.

Recently, President Obama was set to give a speech at Bolling Air Force Base in southeast Washington, D.C. “I rode over,” Shapiro said. “When I showed up at the main gate, they looked at me like they’d never seen anyone arrive on a bike.”