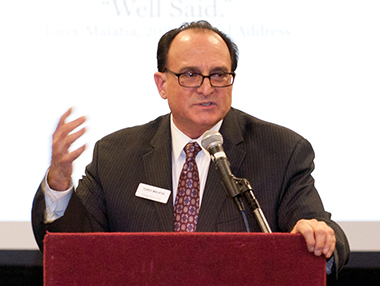 Malatia was a risk-taker who was willing to "put serious money on the table" to try something new, SRG's Thomas said. (Photo: Fab Photo)

Malatia, who joined WBEZ in 1993 as v.p. of programming, made a name for himself as an influential, often controversial figure among public radio leaders. He shepherded This American Life and Wait Wait … Don’t Tell Me! to national carriage, where they became two of the system’s biggest success stories. And he upended WBEZ’s schedule several times, first angering listeners by scaling back music programming, then angering local media critics with a push for more call-in shows and listener-generated content.

Malatia was a risk-taker who was willing to “put serious money on the table” to try something new, SRG’s Thomas said. (Photo: Fab Photo)

One of his biggest and riskiest initiatives, the launch of Vocalo as a separate media service for a young, ethnically diverse audience of radio listeners and digital natives, has been through several iterations since its launch in 2006. Malatia’s emphasis on original local programming helped reposition the station for the world of on-demand media, where listeners can find national programs on multiple digital platforms.

Yet declines in WBEZ’s listenership recently knocked the station out of the top 10 public radio stations with the largest weekly cumulative audience, according to data provided by the Radio Research Consortium. According to local press accounts, the audience losses were more than the station’s board was willing to accept.

“The next innovation project must come for me now by leading another institution,” Malatia said, in a July 26 statement announcing his resignation.

Malatia negotiated the terms of his departure four days earlier, during a July 22 meeting with the board’s executive committee. Under the agreement, he has not returned to the station since then, Malatia told Current.

He skipped a Station Resource Group meeting held at WBEZ headquarters July 25; some staff took his absence as a sign that something was wrong. When the entire staff convened for a meeting the next day, Steve Baird, Chicago Public Media board chair, revealed the reason for Malatia’s absence — that he had resigned. But staff members heard no clear explanation of why.

“It was just a moment of shock,” said Jennifer Brandel, senior producer of WBEZ’s interactive project Curious City. “A lot of people [were] having very serious conversations in various corners . . . . There’s definitely been a lot of hugs going around.”

In an interview with Current, Malatia also declined to discuss why he left, though he noted that prior to his departure he had been actively interviewing candidates to work as his next chief content officer.

Ira Glass, host and creator of This American Life, who has maintained a close working relationship with Malatia for the program’s entire run, talked to three board members after Malatia’s resignation went public. Glass came away with the impression that relations between Malatia and the board began to fray in 2008 because of revenue declines.

“My sense is that was a turning point, and after that they didn’t trust him as much on the business side of things,” Glass said. “It was like a marriage gone bad or something, was my impression.”

Malatia defended his financial performance, saying that WBEZ’s revenue setbacks were triggered by the nationwide recession. “All our finances were — and are — stellar,” he said.

According to independently audited reports posted on Chicago Public Media’s website, the pubcaster ended fiscal 2008 with a surplus of $446,000 on revenues of $23.7 million. During the next four fiscal years, the station’s finances fluctuated but improved overall. In fiscal 2012, revenues of $24.3 million provided a surplus of $1.2 million, a gain of more than 160 percent since 2008, but less than half of the surplus earned in fiscal 2011.

Wendy Turner, v.p. in charge of Chicago Public Media’s technical systems, has regularly attended board meetings during her 13 years with the station. She hadn’t noticed a change in Malatia’s relationship with the board, but she recalls more frequent discussions of ratings in recent board meetings.

Local news accounts of Malatia’s resignation cited unnamed sources who described conflicts with the Chicago Public Media board. Crain’s Chicago Business pointed specifically to board concerns over ratings. Baird indicated in a Crain’s follow-up that there are no immediate plans to change the station’s strategy.

Malatia was puzzled by the Crain’s account. “If you look at total audience, if you add up the streaming audience, the podcast audience and so on, our audience has grown, not shrunk,” he said.

He pointed to declines in WBEZ’s drivetime ratings during the past two years — from a weekly cume of 600,000 to 400,000 — but he attributed 80 percent of the loss to NPR’s Morning Edition and All Things Considered.

“Only a relatively dim person — board member or not — would think that the staff of WBEZ was in any way at fault over this performance weakness which, daily, originates from an entirely separate production house,” he said.

But the drop in cume in spring 2013 put WBEZ in 11th position among public radio stations drawing the largest audiences on a weekly basis, a tumble from its 7th place ranking during the same period of 2012, according to RRC. Some of the audience loss can be chalked up to schedule changes, said Joanne Church, RRC president, but she noted that other stations have tried new program strategies without alienating core listeners.

“Other stations experiment too,” Church said. “WAMU is not doing the same thing they were doing a couple years ago. They’ve changed. KQED has changed. And yet their changes have been more successful. A lot of it may have to do with the markets that they’re in.”

Still, she emphasized, WBEZ remains among the top public radio stations. “I certainly wouldn’t call them unsuccessful in ratings.”

‘Pursuit of something better’

Experimentation in defining new approaches to audience service has been a hallmark of Malatia’s leadership. “He’s been willing to stir a lot of pots in pursuit of something better,” said Tom Thomas, co-c.e.o. of the Station Resource Group pubradio strategy organization.

Beyond WBEZ, Malatia is recognized as “a risk-taker and an innovator, and as someone who’s willing to try new things, put serious money on the table,” Thomas said.

Two of Malatia’s biggest contributions to the public radio system are his commitment to supporting creative talent and the emphasis he places on the mission and service values of public media, Thomas added.

The Chicago Public Media board appointed Chief Operating Officer Alison Scholly as interim c.e.o. and indicated that it will conduct a thorough search for a permanent chief exec, taking six months to a year to make the hire. Scholly has indicated to staff she intends to bid for the post, according to Crain’s. Decisions about the next chief content officer have been postponed.

Prior to July 26, few WBEZ staff members had paid attention to the board’s activities, according to Brandel. That’s changed.

“I’ve heard colleagues saying now [that] there’s interest in attending board meetings,” she said. Some staff intend to begin sitting in on meetings to identify “points of contention” and discover “who is our board, where are they coming from and what are they looking toward in the future?” She plans to attend “not out of hostility, but entirely out of curiosity.”

Though WBEZ is still adjusting to the sudden departure of its leader for 20 years, members of its creative team who talked to Current expressed confidence about what lies ahead.

“Torey left us with a really good plan, a really good vision, and so everybody feels like there’s a direction,” said Silvia Rivera, Vocalo’s managing director. Her producers  plan to bring two programs to the WBEZ airwaves in the fall: Practically Speaking, which covers the arts from a black perspective; and The Barbershop Show, a reporting program that broadcasts live from a barbershop in Chicago’s North Lawndale neighborhood.

Brandel expects Curious City to stay “on the trajectory that we had plotted and that Torey had supported.”

Glass describes “a cautious sense of optimism going forward,” even though he recognizes that “for the coming year there’s nobody running the station who’s a real visionary programmer.”

One long-running joke on TAL — closing credits that attribute an out-of-context quote from the episode to Malatia — is up for reconsideration. Glass said he doesn’t intend to mock Scholly or her eventual replacement. “I feel like the audience and I aren’t ready to switch over to make fun of somebody else,” he said. “I think either we make fun of Torey or we make fun of no one.” Because Malatia retains credit as co-founder of the series, producers can still find ways to work him into future episodes.

Malatia, meanwhile, is considering his next move. He remains “interested in the national scene,” he said, and isn’t committed to staying in Chicago.

He remains chair of the board of directors at the Public Radio Exchange, but resigned from the SRG board Aug. 7, according to Thomas, who hopes that Malatia will continue to participate in an unofficial capacity.

“That’s one of the Malatia principles: Pay attention to where the talent is and keep in touch with it,” Thomas said.