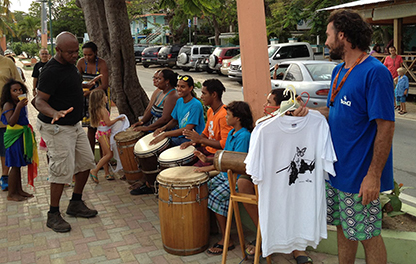 Activists on the Puerto Rican island of Vieques have renewed hope for launching a community radio station after getting a fundraising boost from allies in their community and on the U.S. mainland.

Members of the Committee for the Rescue and Development of Vieques (CPRDV), a group that successfully advocated for an end to the U.S. military’s longtime occupation of the island, feared that another U.S. government action two years ago had doomed their campaign to start an FM community radio station.

Elimination of the federal Public Telecommunications Facilities Program in 2011, which CPRDV had counted on to provide as much as 75 percent of the $100,000 required for construction costs, sank their hopes for raising the money to build and launch the station.

But last year the group received fundraising assistance from Ileana Santa Rivera, the Latino Public Radio Consortium’s desk manager at the National Federation of Community Broadcasters. Now their station, Radio Vieques, is temporarily broadcasting local music, having met the FCC’s deadline for initiating transmissions of their new station. CPRDV plans to move into its studios this month as it continues to develop its broadcast service.

The station’s lineup will deal with causes of concern to CPRDV, including the lasting economic and environmental effects of the U.S. Navy’s military and bomb-testing exercises on the island, which began in the 1940s. But programs will also examine other issues affecting residents, such as gun violence, drug trafficking, a shortage of health-care facilities and a deficient transportation system, said Robert Rabin, spokesperson for Radio Vieques.

“The idea is that the station will be useful to the community and to people’s daily lives,” Rabin said.

Outlet for a ‘message of hope’

Radio Vieques began in 2003 as a weekly program examining issues related to demilitarization. It was produced for Vieques residents and other residents of Puerto Rico and aired on AM stations in San Juan and Humacao, P.R., for five years.

“We were using radio as part of an educational effort about the damaging effects of military toxins on health and other problems,” Rabin said.

For decades the U.S. Navy occupied three-fourths of Vieques, using the territory primarily as a practice bombing range and testing site. Activists argued that the military’s presence limited economic opportunity for the island’s 9,300 residents. Fertile lands and fisheries that could have been developed for economic growth were off limits, as were beaches that could have been tourist destinations. Even today, 9,000 acres of the island are restricted because of the presence of leftover unexploded ordnance, according to the Environmental Protection Agency.

“The military process controlled us and dictated the rules,” said Armando Torres, a Radio Vieques volunteer and CPRDV member who was born and raised on the island.

Opposition to the Navy’s presence began growing in 1999, when a bomb detonation killed a civilian naval employee. Puerto Rican activists, artists and politicians, as well as high-profile figures from abroad such as Robert Kennedy Jr. and Edward James Olmos, rallied for shutdown of the Navy site.

Activists made four demands to restore the island for civilian life: demilitarization, decontamination, return of the occupied lands and socioeconomic development. The Navy left in 2003, but much work remains. Activists, local government and federal agencies are still working to clean up parts of the former military zone and to develop the local economy. The station’s founders hope to advance the cause by creating a space for dialogue and information for and by residents.

“It was important that Vieques acquired a radio station with which it could carry a message of hope, uniting wills and continuing to work for the country,” Santa Rivera said.

CPRDV approached Santa Rivera last year after elimination of PTFP crippled its planned fundraising campaign for the new station. The FCC awarded a construction permit to build a noncommercial educational FM station on 90.1 FM in 2010, but the permit was to expire after three years.

Vieques’ weak economy limited CPRDV’s ability to raise private money locally. The average per capita income on the island is just over $8,400, according to Census estimates. Fundraising events brought in $300 at most.

Santa Rivera, who is Puerto Rican, began helping station leaders expand their fundraising tactics. Puerto Rican artists donated 41 pieces of artwork, generating more than $10,000 in an online auction. One artist, Rafael Trelles, donated a design for T-shirts, which sold out.

Santa Rivera also found support in the U.S., enlisting the help of Artists for Media Diversity, an Austin-based organization that provides a platform for musicians to support public media. Artists donate songs that are collected on digital albums for sale on A4MD’s website. Half of the revenue goes to stations.

A4MD put together Artists for Vieques, featuring music from 18 artists, including Willie Nelson, Los Lonely Boys and Puerto Rican hip-hop duo Calle 13. Sales were modest, but the net proceeds were enough for a $500 down payment on the station’s antenna.

Participation by pop musicians such as Calle 13 also helped to raise the profile of Radio Vieques. Artists for Vieques provided “a spark of excitement that the people who were closest to the project were able to utilize,” says Barbara Kooeyman, co-founder of A4MD.

After six months, backers of Radio Vieques topped their $100,000 fundraising goal. “We were able to identify resources in Vieques, Puerto Rico and the U.S. — many people from public media who knew of Vieques’s hard struggle and who knew that radio would be a powerful tool for it,” Santa Rivera said.