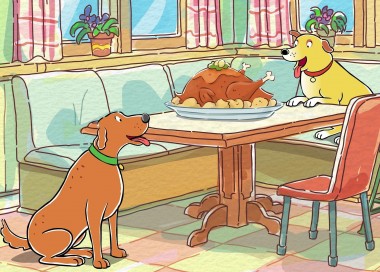 Martha Speaks, the animated series about a dog that learns to speak, is entering its fifth season on PBS Kids. Author Susan Meddaugh alleges that producing station WGBH has cut her out of revenues generated by the show. (Photo: WGBH)

The author and illustrator of the book that inspired the PBS Kids series Martha Speaks is claiming that producing station WGBH owes her thousands in unpaid royalties after misleading her about ancillary revenues generated from the series.

Susan Meddaugh filed a lawsuit against the Boston station Jan. 28 in Middlesex County Superior Court of Massachusetts. The complaint claims WGBH paid her only $30,000 in royalties since 2005, when she signed a licensing contract. WGBH officials told her that the show was not making money, as the station secured a distribution deal and sponsorships that generated funding for the show.

Martha Speaks, the animated series about a dog that learns to speak, is entering its fifth season on PBS Kids. Author Susan Meddaugh alleges that producing station WGBH has cut her out of revenues generated by the show. (Photo: WGBH)

Meddaugh had no say in these additional contracts and received no compensation from them, she said in the complaint.

The lawsuit requests that the court or a jury determine how much she is owed and points to sponsorships and third-party licensing agreements that WGBH secured to finance the series as evidence that she’s been denied compensation.

According to the complaint, WGBH paid Meddaugh $30,000 only after she questioned station officials about a book-publishing deal  that the station secured in violation of her original licensing contract. In the lawsuit, Meddaugh claims that accounting methods WGBH used in reporting on the show’s earnings purposefully misled her to believe that Martha Speaks was losing money. Meddaugh claims that the show was one of the station’s most lucrative properties.

Martha Speaks was written in 1991 and made the New York Times Best Illustrated List in 1992. Meddaugh hatched the story idea after her son asked whether the family dog would be able to speak if she ate alphabet soup. The book and the animated PBS Kids show feature a talking dog and promote vocabulary skills for young children.

The show has been nominated for a Daytime Emmy and launches its fifth season on PBS June 24. PBS has ordered a sixth season, which is to go into production next spring.

In a statement, WGBH said it has had a “positive working relationship” with Meddaugh over the years, but contests the claims made in the lawsuit.

“It is unfortunate that a lawsuit has been filed about the series, and that anyone would lay a claim to the charitable donations made by viewers and listeners to support WGBH TV and radio,” the station said in a statement. “WGBH has moved to dismiss the complaint, and looks forward to resolving this matter so that our focus can return to supporting literacy efforts for children.”

A hearing on WGBH’s motion to dismiss is scheduled for June 11.

According to the lawsuit, Meddaugh and WGBH entered into a licensing agreement in 2005, but details of her compensation and financial stake in the property were withheld from court documents because of a confidentiality agreement.

Since then, the lawsuit says, Meddaugh received no compensation from the contract until last year. As she recalls in the lawsuit, WGBH officials explained that overhead costs were attributed to her and outpaced any earnings. Only after learning of the third-party book deal and receiving a $30,000 cut from WGBH last year did she ask her attorney to dig deeper.

Among the side deals that Meddaugh challenged in court is a partnership with DHX Media Ltd., a publicly traded children’s entertainment company headquartered in Nova Scotia, to sell Martha Speaks to overseas markets. DHX recently announced that Belgian broadcaster VRT-Ketnet had acquired rights to the first season of the series. DHX, which is named as a defendant in the lawsuit, describes itself in promotional literature as the series “co-producer.”

“Under the contract, WGBH has no right to enter into the foreign joint venture with DHX,” the complaint states. “Significantly, Meddaugh has not received even one payment from that joint venture.”

Meddaugh also cried foul over digital products developed from her property, including three iOS apps offered by PBS Kids through Apple’s iTunes service. The apps, including Martha Speaks Dog Party, range in price from $1.99 to $2.99. Downloads of individual programs and entire seasons are also for sale on Apple’s iTunes store. In the lawsuit, Meddaugh claims that her contract does not include a digital-rights provision.

Meddaugh challenges WGBH’s assertions that Martha Speaks is unprofitable. Both WGBH and PBS feature the series in marketing literature soliciting donations, which generate tens of millions of dollars of revenue a year, the lawsuit says. Broadcasts are underwritten by major sponsors including Kiddie Academy Child Care Learning Centers and Chick-fil-A.

Meddaugh also objects to Chick-fil-A’s involvement with the series and especially a promotional tie-in with its children’s meals. The author complains that she received no compensation for the arrangement and that she was given no say in the decision to associate her intellectual property with the fast-food company.

“. . . The Internet is replete with information about Chick-fil-A’s anti-gay position which Meddaugh abhors,” the complaint reads.

The complaint also blasts WGBH for taking on too much debt and overly compensating employees with earnings from her creation. Citing WGBH’s tax filing from 2010, the lawsuit notes that 21 WGBH employees were paid more than $100,000 that year, and 14 of the six-figure salaries were above $200,000.

“And yet, WGBH maintains that Meddaugh’s Martha Speaks has been unable since 2005 to provide any income to her despite the fact that she is a widow in her 60s with a financially dependent adult child,” the complaint states.

Meddaugh requested a jury trial in the case. She is seeking damages and attorney’s fees that will be determined at trial.