As public television’s chief program exec and top producers unveiled highlights of the fall 2013 primetime schedule at the PBS Annual Meeting May 13–16 in Miami Beach, Fla., the network also signaled its willingness to invest in genres with track records of building viewership and differentiating public TV from its cable competitors.

PBS paired with BBC Worldwide to acquire Last Tango in Halifax, a hit contemporary British drama starring Derek Jacobi and Anne Reid as childhood sweethearts who reunite after 60 years apart. Call the Midwife, a drama that PBS chief programmer Beth Hoppe bought to boost Sunday-night viewership in fall 2012, will return for a third season in 2014.

PBS’s strategy to build affinities between programs scheduled together during primetime, initiated last year, appears to be paying off. As network and member-station programmers in Miami celebrated their recent ratings successes, they also looked ahead at plans to build on them.

PBS is “taking greater control of our pipeline and our fate,” Hoppe said during a May 14 session previewing upcoming primetime shows.

In addition to expanding the footprint of British drama through direct acquisitions, Hoppe is investing in PBS’s signature science and natural-history series, boosting their contributions to the national schedule by more than 30 percent. She commissioned 24 new episodes of Nova from Boston’s WGBH, up from 18 this year. Nature, from New York’s WNET, will premiere 19 new episodes, up from 13. The series are paired in PBS’s Wednesday primetime schedule.

Big changes are planned for PBS’s Friday-night public-affairs block, but they weren’t talked up in public sessions. PBS has canceled Need to Know, the newsmagazine series from New York’s WNET, and will replace it with Charlie Rose Weekend in July. Rose, who co-anchors CBS This Morning in addition to helming his PBS interview series on weeknights, will draw material from earlier broadcasts for the Friday show, which will be fed at 8:30 pm. PBS announced the change during a closed meeting of the Public Television Programmers Association, according to a programmer who attended the session. Publicists for WNET and PBS confirmed the change.

PBS will also introduce a new strand of historical discovery programming,   Genealogy Roadshow, debuting Sept. 23 at 9 p.m. Produced by reality TV specialists at Krasnow Productions (The Weakest Link, Average Joe and Dog Eat Dog), the series will air over four consecutive Mondays. A Ken Burns documentary about President Abraham Lincoln’s Gettysburg Address will air in November and be supported by an educational campaign.

Station programmers reacted enthusiastically to Hoppe’s progress to date in reinvigorating PBS’s primetime line-up. “The last four or five years have been pretty fallow,” said Scott Dwyer, p.d. of San Francisco’s KQED, referring to new content on PBS. “There hasn’t been any kind of pipeline. But you can see a distinct difference now. Just in her short time there, Beth is changing the mindset at PBS.”

“This is the strongest lineup of programs we’ve seen in years,” said Terry Dugas, content distribution manager at NET Nebraska. “There are so many shows, I don’t have enough time slots.”

A ratings lift from Downton

Buoyed by the ratings success of Downton Abbey, the Masterpiece Classics miniseries that became a mega-blockbuster this year with broadcast of its third season, programmers are enthusiastic about Hoppe’s latest find for the 8 p.m. Sunday primetime slot, which leads in to Masterpiece.

Last Tango in Halifax was popular with British viewers and earlier this month won a 2013 BAFTA for best drama from the British Academy of Film and Television Arts. Like Call the Midwife, which debuted in the same timeslot last fall, Last Tango in Halifax gives fans of British drama a reason to tune into their local PBS station earlier on Sundays.

“I think that will be a huge hit,” Dwyer said. “It’s right in our wheelhouse — a beautiful story of unrequited love.” It premieres Sept. 8 as the lead-in to Masterpiece Mystery!

As for Downton Abbey, Masterpiece Executive Producer Rebecca Eaton announced that the Edwardian drama would premiere its fourth season Jan. 5, 2014.

The third-season premiere of Downton in January helped boost PBS’s primetime Sunday audience to its current 2.2 average, up 25 percent from 1.75 a year ago. Hoppe reported to pubcasting colleagues gathered in a cavernous ballroom of Miami Beach’s Fontainebleau Hotel that Wednesday nights, which feature science content from Nature and Nova, are up 17 percent over the past two years. The overall primetime average grew 5 percent to 1.46, enough to move PBS up two spots among all networks, to ninth place.

“Pretty great at a time when many networks are flat or on the way down,” Hoppe noted. “We are the only major broadcast network to have an increase.”

Eaton told representatives of local stations that they shared in Downton’s success. “I feel like we were all pitched an incredible fastball and you all knew how to hit it out of the park — and it’s still going,” she said. 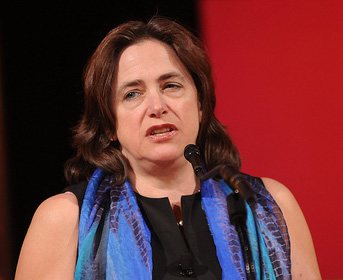 PBS Chief Programming Executive Beth Hoppe highlighted plans to take “greater control of our pipeline and our fate” during her presentation of the fall primetime schedule. (Photo: PBS)

Hoppe, who was promoted to public TV’s top programming job in December 2012, told station reps that she is working to keep building on PBS’s recent success. “The view from 36,000 feet gives us a perspective that no individual producer can have,” she said. “By taking a holistic view of our programming and determining those areas of our service that need strengthening, we are taking greater control of our pipeline and of our fate. The kind of exciting new content that made PBS great in the first place will continue to be the differentiating factor as our commercial counterparts embrace Honey Boo Boo and Duck Dynasty.”

PBS is “spending a lot of time brainstorming with producers to find the next brand-defining series for PBS,” Hoppe said. “We’re developing new concepts, looking at creating new genres and considering the return of American drama to public TV.” PBS declined to provide details regarding Hoppe’s plans to revive American drama, but Variety recently reported that she commissioned a pilot script titled Alta California from Dennis Leoni, e.p. and writer of Resurrection Blvd., which ran on Showtime more than a decade ago.

During the annual meeting, PBS also previewed several documentary shows to debut this fall, including:

— The African-Americans: Many Rivers to Cross, in which Harvard professor and frequent PBS host Henry Louis Gates explores 500 years of cultural history. Producer Dylan McGee introduced it as Gates’s “most personal journey yet.” It airs Tuesdays Oct. 22 to Nov. 26.

— Five programs marking the 50th anniversary of the assassination of President John F. Kennedy. In addition to a one-hour special planned for Nov. 11, there’s a two-parter from American Experience; Nova’s “Cold Case JFK,” examining whether new forensic techniques would have yielded a more conclusive explanation for the President’s killing; and, from Secrets of the Dead, “One o’ Clock” (w.t.), chronicling how news of the assassination spread, from the moment that gunshots rang out in Dallas through the announcement of Kennedy’s death one hour and eight minutes later. 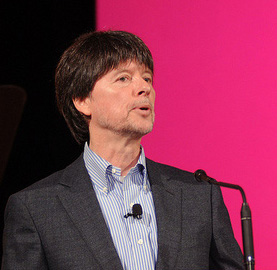 Ken Burns announced that his film on the Gettysburg Address will debut alongside a major educational campaign. (Photo: Snapshots Event Photography for PBS)

— “The Address,” a film by Ken Burns that follows students in Greenwood School in Putney, Vt., as they memorize President Abraham Lincoln’s Gettysburg Address in its entirety. The school serves boys with a range of severe learning disabilities who struggle learning to recite the speech and ultimately succeed. The film, still in postproduction, will be backed by an ambitious outreach project encouraging viewers across the country to learn the speech. “Public media can reach every student in the country; it can reach every adult,” said Burns, who announced the project in a keynote address. “We intend to challenge all of them to join these boys in memorizing the speech.” Burns is working to finish the doc, which will run from 90 minutes to two hours in length, for broadcast Nov. 19, the 150th anniversary of the battlefield proclamation.

— A multipart Frontline documentary about the growing problem of brain injuries among former National Football League players. It was produced in collaboration with ESPN and will premiere in October. The film was presented in Miami Beach during a luncheon celebrating the 30th anniversary of PBS’s signature investigative series. Deputy Executive Producer Raney Aronson moderated a panel featuring Dwayne Bray, senior coordinating producer for ESPN; Frontline producer Michael Kirk; and Hall of Famer Harry Carson of the New York Giants. Carson said that if he had known during his football career what he knows now about brain injuries, he would not have played football. He gave his young grandchildren golf clubs for Christmas, hoping to steer them away from the game. Carson also has suffered multiple concussions and doesn’t know what future neurological problems he may endure. “This is a big and heartbreaking story,” Kirk said, noting that 4,000 former NFL players and their spouses are currently part of a class-action lawsuit against the league.

— Big Ideas with Steven Johnson, a miniseries funded by the PBS/CPB Program Challenge Fund that has the potential to expand into a continuing series, Hoppe said. Johnson, a digital Renaissance man with 1.5 million Twitter followers and 1.3 million hits on his TED Talks presentation, is author of the book Where Good Ideas Come From. For the series, he examines the roots of innovation and how to fuel more of it.

This article was first published in Current May 28, 2013, and updates an earlier online version.
ShareTweet EmailPrint More