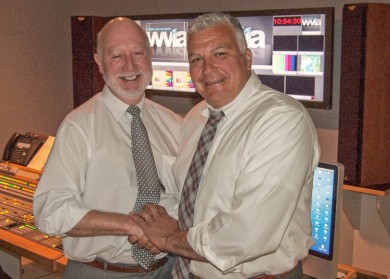 Pittsburgh’s WQED has hired Barry Nelson, formerly of WGBH, as its director of on-air fundraising.

At the Boston pubcaster, Nelson was director, radio and TV on-air fundraising and direct response, since 2006. Previously, he owned Bartoid Associates in Foxborough, Mass., where he created and executed new approaches to public radio on-air pledge drives. He also worked as creative director at WCRB in Boston, now Classical WGBH, and is the co-author of Mr. Ed: Dead, a compilation of obituaries for fictional characters such as Betty Crocker and Holden Caulfield.

In his new role, Nelson will oversee all WQED fundraising on its four television channels and WQED-FM, its 24-hour classical station.

Lilli Mosco, WQED vice president of development and membership, said that Nelson’s “deep experience in fundraising, his public television and radio background, and his production and creative work will help us connect with our audience and increase our successful development initiatives.”

Kelly will continue to serve in prominent roles as president emeritus and chief development officer as he concentrates on building the WVIA Endowment. He also plans to remain active as a consultant and on-air host and producer.

The changes, recommended by a consultant to the WVIA Board of Directors, were announced following a June 13 meeting of the board.

Currá has been with WVIA for nine years, involved in TV production and programming, development, management and strategic planning. Currá “is also a filmmaker/producer, former commercial broadcaster and educator, entrepreneurial thinker and leader and known to colleagues as a ‘change agent,’” the board said in the announcement.

Kelly is approaching 40 years at WVIA in various roles, mainly in development and marketing. He has been president since 1991, and is “uniquely positioned for leadership of the WVIA Endowment, which will help secure a future less dependent on government funding,” the announcement noted.

Greg Cameron, c.o.o. of Chicago’s WTTW since 2008, has resigned to become executive director of the Chicago-based Joffrey Ballet, effective July 1. “Supporting artists and the arts in Chicago and beyond is my personal mission and passion,” Cameron said. In an email to WTTW staffers, Dan Schmidt, station president, said management is “extremely grateful for his expertise, creativity, positivity and hard work.”

Frank Dominguez has accepted the position of general manager and content director of WDAV Classical Public Radio at Davidson College in Davidson, N.C. Dominguez began serving as interim g.m. after the departure of Scott Nolan in November 2012. He’s been with the station since 1994 in various roles, including program director.

Dominguez also served as a consultant to classical radio stations nationwide through the Public Radio Program Directors Association. He began his public radio career at WFAE in Charlotte, N.C., where he hosted the popular Sunday-evening music program Nightscapes for eight years.

Cephas Bowles, president of WBGO-FM in Newark, N.J., has taken a leave of absence for health reasons. Amy Niles, s.v.p. and c.o.o., is now acting president for the jazz station. “Cephas has been an outstanding leader of WBGO since 1993 and a tireless advocate for public radio for more than three decades,” said Stephen Ifshin, chair of the Board of Trustees of Newark Public Radio. Bowles said he looks forward to returning to work as quickly as possible.

WGBH News has hired two journalists. Kirk Carapezza is now managing editor and lead correspondent for the Boston station’s higher-education desk, which will produce broadcast and online coverage of Boston’s universities and colleges. Carapezza recently worked as an online reporter and editor for Vermont Public Radio and oversaw content for VPR.net. He previously reported for Wisconsin Public Radio and WBUR in Boston. WGBH also announced that David Bernstein, contributing editor to Boston Magazine and formerly with the Boston Phoenix alt-newspaper, is joining its news team to provide political commentary. Bernstein will contribute political analysis and commentary for Greater Boston, Boston Public Radio, Morning Edition and All Things Considered.

Micah Schweizer is the new cultural affairs and production director at Wyoming Public Media at the University of Wyoming in Laramie. General Manager Christina Kuzmych told Current that Schweizer will focus on cultural and education issues and events statewide for broadcast and online reports. Schweizer departed WNIN in Evansville, Ind., where since 2008 he hosted Morning Edition and a Friday public-affairs interview show, The Trend.

Thomas Labuzienski has joined WVPE-FM in Elkhart, Ind., as an underwriting account executive. Labuzienski previously was an account manager, then general and national sales manager, at WSBT-TV, the local CBS affiliate. He also owned Ad Lab Solutions, and was sales and marketing man-ager for FinditLocal411.com. Labuzienski is on the board of local chapters of the Better Business Bureau and the American Heart Association.