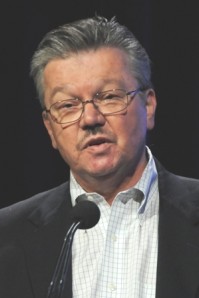 Michael Sullivan, an influential producer for PBS’s Frontline for more than 25 years, died at his home in Marblehead, Mass., June 23. He was 67.

Known to his colleagues as Mike, the Harvard University graduate joined Frontline in 1987 as a senior producer, after a stint at Minnesota CBS affiliate WCCO-TV. While at Frontline, Sullivan worked alongside David Fanning, the program’s founder and e.p., on some of the flagship documentary program’s most acclaimed projects. Those works included 2003’s Who Was Lee Harvey Oswald?, 2004’s Ghosts of Rwanda, and a series of films directed by David Sutherland, including this year’s Kind Hearted Woman.

“He was a strong character and at times quite thoughtful,” Fanning told Current, adding that Sullivan brought ambition and unique forensic skills to Frontline. “He loved to take on arguments and to challenge them.”

Sullivan left the show briefly in 2000 to work on PBS’s proposed public-affairs program Public Square, which never found sufficient funding. He returned to Frontline after the events of Sept. 11, 2001, to become e.p. of special projects, a role in which he oversaw many complex, multipart investigations.

“He was an active and vibrant partner to us intellectually, and always pushed us to do the big stories — the ones that mattered, and the ones that would be remembered,” Raney Aronson-Rath, Frontline deputy e.p., told Current.

Religion was a favorite topic for Sullivan, and he explored the subject in series such as God in America, The Mormons, and Faith and Doubt at Ground Zero.

“I thought we needed more sensible coverage of religion and its impact on the American scene,” he told Current in February.

“Mike was an optimist, and he always held out hope,” Louis Wiley, senior editorial advisor for Frontline, told Current. “No matter how grim the day’s headlines were, he would make the argument that reason and intelligence would prevail, eventually.”

In January, Sullivan exited Frontline following budget cuts to the program and a phasing out of his role. He continued to work as an independent producer and was working on a Frontline project about immigration reform at the time of his death. Fanning said the film will air “whenever immigration reform gets resolved.”

A public memorial for Sullivan will be held July 2 at Harvard University’s Memorial Church in Cambridge, Mass.