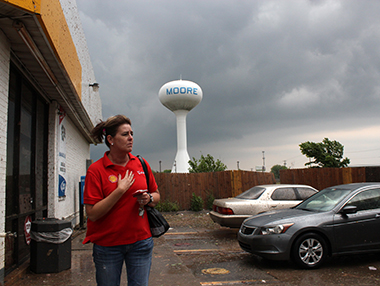 An employee of the gas station in Moore, Okla., where StateImpact reporter Joe Wertz took shelter as a tornado ripped through town. (Credit: Joe Wertz)

One of the first reporters on the scene May 20 after a massive tornado struck the town of Moore, Okla., didn’t mean to be there.

Joe Wertz, digital reporter for StateImpact Oklahoma, was trying to get home.

An employee of the gas station in Moore, Okla., where StateImpact reporter Joe Wertz took shelter as a tornado ripped through town. (Photo: Joe Wertz)

Wertz, working out of KGOU-FM on the campus of the University of Oklahoma in Norman, and other station employees heeded storm warnings May 20 by leaving work early. Wertz lives in Oklahoma City about 20 miles north of Norman, and hoped to beat the storm home.

Instead, he was sitting in traffic on Interstate 35 as it began to hail.

“I was either in a really great spot or a really dumb spot,” Wertz recalled. Worried about hail damage to his car, Wertz pulled off the highway and parked at a gas station in Moore. The tornado was tracking north, but Wertz, a native Oklahoman, assumed it would follow the trajectory of a similar 1999 storm and bypass his area.

“It looked like it was going north, until it wasn’t, and at that point it was coming straight for us,” he said.

Wertz huddled inside the gas station alongside employees and other motorists as the tornado came directly at them. He tried to record the sound but fumbled with the recorder button when the station’s power went out. As soon as the tornado passed, Wertz, carrying a camera and his recorder, got back into his car and left the gas station. He’d heard from a colleague that an elementary school had been destroyed by the tornado, and he drove toward Plaza Towers Elementary School, one of two in Moore to be devastated by the storm, to interview people and take photographs. After parking at a nearby strip mall, he hoofed it on foot to the school.

Later that afternoon, All Things Considered hosts Melissa Block and Robert Siegel interviewed Wertz live on his cellphone. His photographs of leveled houses and buildings were among the first photos of the destruction to be circulated by news organizations. NPR.org featured them on its homepage.

The tornado, the deadliest of many to touch down in the greater Oklahoma City area last week, killed 24 people, including seven Plaza Towers students; injured more than 300; and destroyed many homes, businesses and schools. None of Oklahoma’s public stations was damaged by the tornado, but one employee of the state’s public TV network lost her home. Kallie Langham, graphic artist at Oklahoma City–based OETA, and her husband and dog are staying in a hotel offering free stays of up to 30 days to tornado victims whose homes were destroyed, according to Dan Schiedel, OETA executive director.

Others had close calls. KGOU Membership Director Laura Knoll lives one block north of the storm’s path. She said the tornado narrowly avoided her house.

All hands on deck

Oklahoma has a small but tight-knit pubcasting community, so covering the storm and its aftermath required everyone on the team to cover for each other.

“I think it’s pretty telling when your operations director can fill in as Morning Edition host that you have a pretty small staff,” Hardzinski told Current. He also fielded media requests for the station from outlets as far away as Australia.

This type of arrangement isn’t unusual at the station, which has had more than its fair share of crises to report on, including a deadly rash of 70 tornadoes in May 1999 and the 1995 bombing of the Alfred P. Murrah Federal Building in Oklahoma City.

“The thing about being a small staff is that we are, I think very effectively, cross-trained,” Karen Holp, KGOU station manager, told Current. “I haven’t gone in [the booth] in a long time, but even I could go in and get the master control.”

Gwartney wasn’t alone in filing field reports for KGOU. Wertz and his colleague on the StateImpact team, reporter Logan Layden, put aside their daily duties reporting on economics and industry and contributed to the tornado coverage. Additionally, reporters from KOSU in Stillwater, about 80 miles north of Norman, drove down to help with the coverage. NPR sent National Desk Correspondent Wade Goodwyn to Moore to file additional reporting.

“There’s always an all-hands-on-deck kind of situation that we talk about, and actually a tornado is exactly the kind of thing we talk about,” Wertz said.

Oklahoma’s pubradio stations share coverage through an FTP database, and they’re partners and joint beneficiaries of the StateImpact project, an enterprise journalism initiative launched with assistance from NPR.

OETA runs one weekly local news program and doesn’t have the production capacity to react quickly to fast-breaking news. Its staff responded to the natural disaster another way — by raising money on behalf of tornado victims.

On May 21 the FCC approved Schiedel’s request to solicit donations on-air for tornado relief efforts.

The state network set up a toll-free number for donors and promoted it by running crawls over its regularly scheduled programming. It also sent an email blast to viewers and supporters. Through a partnership among local broadcasters, a call center set up with the American Red Cross raised more than $207,000 in two days, May 21–22. Oklahoma City Thunder star basketball player Kevin Durant dropped by to answer phones.

“That is really what our role has been — to help others help people who have been touched by this devastation,” Schiedel said. OETA was primarily concerned with sharing “information about places where people can go to find out about loved ones or how they can get help from organizations.”

OETA plans to mount a tornado relief broadcast this week. Shiedel is working with community organizers and consulting with colleagues at Louisiana Public Broadcasting to organize a benefit concert for those who lost their homes and family members. He hopes to broadcast it live statewide.

KGOU and KOSU haven’t solicited donations for victims on-air, according to Holp, but they’ve secured a waiver from the FCC and plan to do so.

Correction: NPR National Desk Correspondent Wade Goodwyn traveled to Oklahoma to report on the tornado, not Southern Bureau Chief Russell Lewis, as reported in an earlier version of this story. Goodwyn filed his reports independently and not through KGOU’s studios. Additionally, OETA raised more than $207,000 in two days for the American Red Cross, not $800,000, as initially reported.
Questions, comments, tips? lapin@current.org
This article was first published in Current, May 28 2013.
ShareTweet EmailPrint More