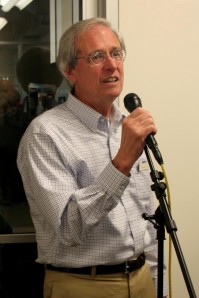 KUOW President Wayne Roth, a former NPR Board chair and past recipient of CPB’s Murrow Award honoring outstanding contributions to public radio, will retire in September.

During his 45-year career in public broadcasting, Roth provided strategic leadership to public radio on both the local and national levels.

Roth joined Seattle’s KUOW, which broadcasts to western Washington state and southern British Columbia, in 1983. Under his leadership, KUOW ascended to one of the top public radio news stations in the country.

“Wayne has built an outstanding team of radio professionals, and the station has grown tremendously and prospered under his leadership,” said Joan Enticknap, board chair of Puget Sound Public Radio. “KUOW is an integral part of our community and our quality of life in the Northwest.”

KUOW reaches more than 450,000 listeners each week, an audience that makes it the top news and information station in the Seattle region.

Roth served on the NPR Board in the 1980s and “played a critical role in reinventing NPR, moving it from reliance on federal funding and directing those funds to the stations instead,” according the announcement released by the University of Washington, KUOW’s licensee. His service on the NPR board included two years as chair, from 1988–90.

Roth also is a co-founder of the Maryland-based Station Resource Group, which advises top stations on public radio policy and development. He served on the SRG board and in 2012 completed a term as its chair. SRG initiatives completed with his oversight include the CPB-backed Grow the Audience study and two precedent-setting agreements that benefited the entire public radio system: a contract with Arbitron to provide Portable People Meter ratings to public radio stations; and a license-fee agreement with SoundExchange, the nonprofit performance rights organization.

“He has played an extraordinary role in creating America’s public radio system,” Thomas told Current, “building strong local stations, contributing in many ways to the growth of our national organizations, nurturing the careers of dozens of talented people and always advancing a vision of how we might do better.”

Roth received CPB’s 2005 Edward R. Murrow Award honoring individuals whose contributions have benefited the field of public radio. At the time, CPB noted: “Roth has pioneered most of the significant initiatives undertaken by public radio — from offering stations more choice in their program investments, to increasing participation of minority and rural stations, to pushing for more regional collaboration.”

Roth is also managing director of the Northwest News Network, a regional consortium that produces news coverage for pubradio stations in Washington, Oregon and Idaho. The success of N3, as the consortium is called, influenced creation of the CPB-backed Local Journalism Centers in 2010.

Enticknap said a national search is under way for his replacement.

He will succeed Rod Bates, who is retiring June 30 after leading the state network for 18 years.

Ken Bird, chair of the Nebraska Educational Telecommunications Commission, announced the appointment on May 1, saying, Leonard “is the right fit for Nebraska and NET.”

Leonard has worked in management at several pubcasting stations over 32 years. In addition to IPM, he was chief administrative officer at KCTS, Seattle; g.m. for KYVE, Yakima, Wash.; and v.p. for television at WXXI, Rochester, N.Y. He also worked as a videographer/editor at South Dakota Public Broadcasting.

He is president of the Illinois Public Broadcasters Council, a board member of the University Licensee Association and the Public Media Business Association, and a member of PBS’s Communications Advisory Committee.

“We have a wonderful and longstanding relationship with David, dating back to the origins of Marketplace in 1989, and have been looking at ways to maximize his role since he returned in 2010,” she said.

Brancaccio first worked as the program’s European correspondent based in London in the early 1990s, and hosted Marketplace from 1993 to 2003. He co-anchored NOW with Bill Moyers on PBS starting in 2003, taking over as the program’s solo anchor in 2005 and remaining through 2010. He then became a Marketplace special correspondent for its “Economy 4.0” series. Last year, his “Robots Ate My Job” series, in which he drove across the country interacting only with machines, examined how technology is changing the workforce.

Brancaccio took over the anchor chair May 6.

The class of 2013 of the annual weeklong Producers Workshop at WGBH included producers from as far away as Washington state and Hawaii, according to organizer Judith Vecchione, a WGBH e.p. who oversees the program.

The 2013 Class of WGBH’s Producers Workshop, a weeklong training program, attracts station-based producers from across the country. Veteran production exec Judith Vecchione, at center holding sign, has organized the annual boot camps since 2001.

The Boston pubcaster developed the annual boot camp for producers in 2001, with support from CPB and PBS. Since then, nearly 250 participants have attended the springtime seminars on writing, editing, fundraising, transmedia production, project management and more.

“Many of the workshop graduates have gone on to fulfill an important goal of the workshop — creating programming for national public media,” Vecchione said, including strands such as AE, American Masters, Frontline, African American Lives and Latin Music USA.

This year, four films by grads will air on Independent Lens and POV. Other grads will see their films distributed nationally through American Public Television, the National Educational Telecommunications Association, PBS Plus and the PBS World Channel, or will produce content for local and regional PBS stations across multiple platforms.

Their projects have won numerous awards: duPonts, Emmys, Tellys, Cine Golden Eagles, a Peabody — even an Oscar in 2009 for Megan Mylan’s Smile Pinki, about a 5-year-old Indian girl born with a disfiguring cleft palate who undergoes transformative corrective surgery.

At NJTV, New Jersey’s public television network, Bob Males is being promoted to senior special projects producer, from executive producer for NJ Today with Mike Schneider. Males will oversee and develop local programs and live specials, and establish new content partnerships with colleges, universities and media outlets. The network currently has eight content bureaus statewide. Stepping into Males’ previous job is Phil Alongi, senior producer of NJ Today with Mike Schneider. Alongi will supervise daily operation of the network’s weeknight news broadcast, and manage news and production staff at the Montclair State University studio that serves as the program’s broadcast home. The move was effective May 1.

Colorado Public Radio has promoted Monika Vischer to classical program director. Vischer has spent more than 20 years at the station, helping launch its flagship program, Colorado Spotlight, in the 1990s. She also hosted and produced the Sunday-morning show Sacred Classics. Vischer continues to host middays Monday through Friday. In her new role, she will oversee strategic direction of CPR Classical, expand local programming partnerships and deepen listeners’ engagement in the classical music repertoire.

Kilowatt, a 2007 novel set inside community radio station KVMR in Nevada City, Calif., is now available in paperback. The story by Joe McHugh revolves around two KMVR journalists as they investigate an energy company with a revolutionary process for generating clean, affordable electricity. McHugh has appeared on NPR, and is a past member of the KMVR’s board of directors and producer/creator of “The Telling Takes Us Home,” a series of family stories produced with CPB funding.

Linda Taggart, a longtime Maryland Public Television producer and fundraiser, has returned to the station as its first managing director of individual giving.

She will oversee a staff of 11 in MPT’s development division.

Taggart first arrived at the state network in 1981 as an assistant producer in regional productions, and soon after became an associate producer for State Circle, the station’s public affairs show.

In 1987, she began working on MPT’s national programs, including Wall $treet Week with Louis Rukeyser.

She transferred to MPT’s development and marketing in 1993 and headed on-air fundraising for seven years, becoming senior director of that department.

In 2005 she left MPT to direct on-air fundraising at WQED in Pittsburgh.

Orlando pubcaster WMFE-FM has hired LaFontaine Oliver as its new president and g.m., replacing José Fajardo, who left in December 2012 shortly after the $3.3 million sale of its television operation to the University of Central Florida. Oliver arrives from WEAA-FM in Baltimore, a jazz and NPR news station licensed to Morgan State University. He joined WEAA in 2007 and, while there, created the nationally syndicated Michael Eric Dyson Show. Oliver has also held management positions with SiriusXM in Washington, D.C., and Radio One, an urban-oriented multimedia company based in Silver Spring, Md. “LaFontaine’s proven record of success and passion for broadcasting stood out, and we feel this combination bodes well for the future success of the station,” said Derek Blakeslee, chair of the Board of Trustees of Community Communications Inc., WMFE’s license holder.

R.G. Dunlop, a journalist with more than 30 years experience in covering Louisville and Kentucky, is joining the staff of the Kentucky Center for Investigative Reporting, Louisville Public Media’s new journalism unit. Dunlop was a member of the reporting teams that were recognized with two George Polk Awards for investigative reporting and became three-time finalists for the Pulitzer Prize. He has covered such topics as the death penalty, coal-mining safety and health, prescription-drug abuse, lax state oversight of private prisons and the corrupting influence of money in politics. Dunlop has been with the local Courier-Journal since 1977 in  various positions, including Eastern Kentucky bureau chief, legal affairs reporter, city editor and state enterprise reporter. He begins work June 17 at the center, which plans on hiring three more reporters.

Coleman Insights, a media research firm and consultancy based in Research Triangle Park, N.C., has hired Joanna Douglas as vice president. Douglas’ experience includes 13 years at Arbitron, where she helped the ratings company roll out its Portable People Meters. Prior to that, she worked as a radio sales manager for McClure Broadcasting and Clancy-Mance Communications, as well as a media buyer for Ackerman McQueen. She starts her new job June 3.

Cari Ness Nesje has joined the Car Talk Vehicle Donation Services team as director of station support. Nesje will work with Director of Business Development Twyla Olson to expand services to NPR and PBS member stations. Most recently Nesje was an executive recruiter for Livingston Associates, a public media recruitment firm based in Baltimore. She was also a managing producer for Whad’ya Know? from PRI and Wisconsin Public Radio, and Western states representative in American Public Media’s station relations department. “I am looking forward to donating my own beloved workhorse, Maude,” Nesje said in the hiring announcement. “She’s a ’95 Honda Accord with close to 200,000 miles on her rusty bones. Now I just have to choose which of my favorite public radio stations she’ll go to.”

The FCC has appointed Michael Steffen as director of digital learning, a position that will lead the commission’s work to modernize broadband infrastructure in schools and libraries. The FCC created the new post to build on education projects such as the Digital Textbooks Initiative, a collaboration among the FCC, the Department of Education, the education technology industry and nonprofit organizations to increase student access to advanced digital learning materials within five years.

The new director of engineering, information technology and emergency response systems at Vegas PBS is Jeffrey Yeagley. Before joining the station, he was president of Eagle Comm Enterprises, serving as executive consultant for the state’s Division of Emergency Management. He is a retired U.S. Air Force master sergeant who has also worked with the Las Vegas Metropolitan Police Department as its radio systems and fleet operations manager.