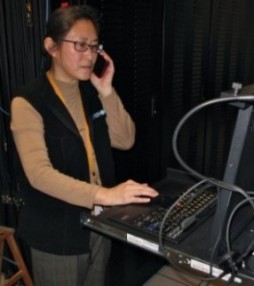 Sun, who grew up in north-eastern China during the Cultural Revolution, pursued an engineering career out of "curiosity," she said. "With engineering, you see a problem, you fix it and you see the result right away." (Photo: WOSU)

Sun, who grew up in China during the Cultural Revolution, pursued an engineering career out of “curiosity,” she said. “With engineering, you see a problem, you fix it and you see the result right away.” (Photo: WOSU)

When Ling Ling Sun was growing up in northeastern China in the 1970s, television was a nascent communications medium. Very few Chinese households owned a TV set, and Sun’s family home in the city of Harbin was no exception.

The first television broadcast in China was transmitted in 1958. The first time that Sun watched a television program was 20 years later, when she was 18.

“I had a relative in Beijing, and they had a TV in their home,” explained Sun. “That was some experience, to actually sit down and watch a TV program. It was exciting.”

As a girl, Sun fed her fascination with television by reading about it, not watching. Her curiosity led her to a career in broadcast engineering that now spans three decades of experience, adapting to changes in technology, language barriers and differences between TV standards in her native country and the U.S.

Sun is engineering manager for television broadcast services at WOSU in Columbus, Ohio, and was recently appointed vice chair of the PBS Engineering Technology Advisory Committee, which has been focused on planning the next public TV interconnection system.

Her career in public broadcasting has been an unusual one. She enrolled in the Beijing Broadcast Institute, China’s top university for media training, in 1978. She came of age shortly after the Chinese Cultural Revolution had ended, when the country was trying to fill a shortage of technical workers. Sun wanted to understand how television worked, so she decided to study electronics engineering at the institute.

“It was probably curiosity,” she recalled. “I enjoy fixing things. With engineering, you see a problem, you fix it and you see the result right away.”

Sun has resolved many engineering challenges over the years, both in her native country and within the U.S., where she took her first public media job at KWSU-TV in Pullman, Wash., in 1991.

WOSU General Manager Thomas Rieland described Sun’s ability to fix things and her matter-of-fact approach to problem-solving as key skills that she brings to the job.

During a meeting to plan the design and construction of a new WUSO studio facility several years ago, Rieland recalled, Sun listened quietly in the background as five engineering experts discussed placement of a cord for more than an hour. Eventually, Sun spoke up, proposing that they route it through the top of the production control. Her idea solved the problem and let everyone in the room know whom to go to with technical questions.

“In a very unassuming way, she makes such a difference in our organization,” said Rieland. “All those outside experts were asking for her opinion about everything after that.”

Sun’s role as the only woman in the room at engineering and technical meetings “never seemed to faze her,” said co-worker Karen Olstad.

Sun became a pioneer in the workplace shortly after graduating from college. Two years after taking her first job at China’s Provincial Microwave Network, she was promoted to deputy chief of the transmitter division and became its first female employee.

Her male colleagues found her to be so talented that they decided, “Women can work here,” Sun recalled. Soon another female engineer joined the staff.

When Sun began working in public television in 1991, her husband was pursuing a degree in biochemistry in Washington state. The couple had a 4-year-old son, and Sun took a part-time job at KWSU-TV.

Starting her career anew in the U.S. was challenging on multiple levels. Since China uses the Phase Alternative Line standard for encoding television signals, she had to quickly learn the NTSC standard for analog broadcasts in the U.S.

Then there was the matter of learning to speak English fluently. “I thought I knew English until I got on the plane [to the U.S.] and I didn’t understand a word,” she joked.

The language barrier was especially difficult to overcome in the workplace. Sun had to relearn the technical language of electrical engineering in English and translate everything in her head.

Olstad, who also worked with Sun at KWSU, recalled being impressed by her colleague’s ability to speak and understand English.

“She doesn’t know how smart she is,” Olstad said. “Even though English is not her language, she can explain very technical things in a way that I can understand. Other engineers whose language is English are not good at that.”

Sun joined WOSU in 2002, and she worked closely with former chief engineer Tom Lahr on the pubcaster’s digital TV conversion. They were WOSU’s only two TV engineers assigned to the complex technical project, Lahr recalled. “She knew what needed to be done, followed up on it and made sure it went through,” Lahr said.

WOSU led broadcasters in the Columbus market by launching its DTV signals in 2003; its analog stations went dark March 31, 2009, more than two months ahead of the June 12 deadline to cease analog TV transmissions. WOSU was among the stations that CPB recognized with My Source Community Impact Awards for Engagement, honoring outreach efforts to inform TV viewers about the digital transition.

When Lahr retired in 2009, Sun was promoted to succeed him as chief engineer. Her job over the last few years has focused on moving the station’s broadcast operations to an automated workflow under a digital master control system. WOSU’s master control staff, which once numbered six, is down to two.

Sun sees the rapid pace of technological change as one of the biggest challenges facing public broadcasters. On the PBS Engineering Technology Advisory Committee, one of the primary topics under discussion has been the Next Generation Interconnection System, a technical project switching pubTV’s distribution system to the MPEG-4 compression standard and providing real-time delivery of programming to stations.

And at local stations and PBS, public TV engineers are preparing for voluntary auctions of television spectrum, to be completed next year. As with the DTV transition, Sun sees a big job ahead as she navigates WOSU, and its local viewers, through the process. n