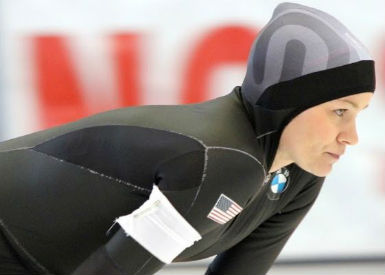 Bridie Farrell, pictured at a recent American Cup Speedskating match in Salt Lake City, decided to share her story of sexual abuse with Milwaukee Public Radio’s Mitch Teich. “No one that close to me really asked the hard questions, questions that Mitch had to ask,” she said. (Photo: Mike Bernico)

Mitch Teich could have predicted a few outcomes from his decision to take up speedskating — sore muscles, bruises from the occasional spill on the ice at high speed — but probably not the biggest story of his journalism career.

The Milwaukee Public Radio journalist, who hosts the station’s weekday local newsmagazine Lake Effect, brought to light Feb. 28 the ordeal of speedskater Bridie Farrell, who revealed that she had been sexually abused as a teenager by her coach, Andy Gabel. Gabel is a four-time Olympian and a former head of US Speedskating, the governing body for the sport in America.

Farrell was 15 and Gabel was 33 when the abuse occurred. The skater told Current that she had considered going public with her allegations a year earlier but backed off after feelings of uncertainty kicked in. After meeting Teich, she felt that she had found a platform for sharing her story.

She had told a few friends and family members, but that didn’t make going public much easier. “No one that close to me really asked the hard questions, the questions Mitch had to ask,” she said. “To actually hear the questions and articulate it for an audience was challenging, but at the same time, I’ve been over so many questions in my head that all the answers were there.”

In her late teens and early 20s, Farrell told Teich, she was afraid to come forward with the allegations against Gabel because she feared that it would jeopardize her career in national speedskating. Later, she felt “broken” from the experience, “and it took a long time and a lot of work and some pretty dark times to come to grips with it and put myself together,” she said on Lake Effect. She began talking to friends and family about the abuse in 2007, a decade after it occurred.

Teich and Farrell first discussed her revelation with microphones off before she agreed to an interview for broadcast. But even then, “I don’t think I fully grasped how significant her story was until she sat down in studio on a Monday afternoon in February and we turned the recorder on,” Teich said. “We talked in the studio for about an hour, and then we recorded the interview and got to the end of it, and I knew then that it was a huge story.”

Milwaukee is home to one of only two indoor long-track speedskating courses in the U.S. Teich decided to sign up and try speedskating after watching the sport while his kids were taking ice-skating lessons at an adjoining rink.

He learned that a speedskating marathon was scheduled at the facility for January, and he pitched a story about the event to Only A Game, NPR’s weekly sports program. In the course of reporting on the event, he approached Farrell, who had time to chat with him because she’d dropped out of a 50K race and was sitting on the sidelines.

The two discussed the possibility of Farrell recording a series of audio essays for Lake Effect about her career in speedskating. When she first visited Teich, she said she wanted to tell him a part of her story that she’d never discussed publicly. She then told him about Gabel.

Farrell told Teich that the abuse had lasted for a few months. She admitted that she was “star-struck” by Gabel, a celebrity among skaters, but later realized that “it is just so skewed and so off and so disgusting and such a violation of the authority and power that he knew he had.”

Farrell told Current that she had approached another reporter with her story around the time of the 2012 Summer Olympics. Swimming and gymnastics were in the spotlight then, two sports in which abuse is also a problem, she said. But “it didn’t feel right,” and she kept quiet.

“What amazes me is the level of trust she placed in us to do right by this story,” said Teich, pictured in the studio with Farrell. (Photo: Milwaukee Public Radio)

“This time around, it didn’t seem timely,” she says. “It was more that maybe this was the platform from which I could speak.” And she trusted Teich. When she told him about Gabel, Teich first asked her whether she was okay or needed help.

“He wasn’t hungry for the story,” she said. “It was more concern for me and how it would be to go on the air.”

“What amazes me is the level of trust she placed in us to do right by this story,” Teich said. “After so many years of doing this, it still amazes me when somebody feels comfortable with essentially handing their life off to you, and they say, ‘I trust you to represent me to the world.’”

With this particular story, Teich and Milwaukee Public Radio had to tread with caution. Farrell knew that the details of her story would be just as damning whether she named Gabel or not, and she decided that she would. Teich also believed that the coach should be named.

“The story without his name would have been an interesting story of triumph over adversity,” Teich said. “But it would not have done justice to its full magnitude. The story was not just Bridie Farrell. It was Bridie Farrell and Andy Gabel.”

But the decision to name Gabel carried additional responsibilities of a kind that Milwaukee Public Radio had rarely dealt with. “We are a fairly small local public radio station,” Teich said. “We don’t have an enormous legal team on hand.”

The station contacted the Wisconsin Broadcasters Association, which put them in touch with a libel lawyer, and a University of Wisconsin lawyer also advised the station. Because Teich found Farrell’s account credible, and because Gabel could be expected to have access to the press if he wanted to rebut Farrell’s claims, the station felt safe in proceeding to name the coach.

Teich attempted to reach Gabel and got no response. After the story aired on Lake Effect, it was picked up by the Associated Press and USA Today. On March 2, Gabel spoke to the Chicago Tribune.

“Almost two decades ago I displayed poor judgment in a brief, inappropriate relationship with a female teammate,” Gabel said. “It did not include sex, however I know what happened was wrong, and I make no excuses for my behavior. I apologize to her, and I am sorry for bringing negative attention to the sport that I love.”

Gabel resigned from the US Speedskating Hall of Fame Committee and from the International Skating Union. Then another accuser came forward. On March 8, Nikki Meyer, a speedskater and two-time Olympic medalist, told Milwaukee Public Radio that Gabel forced her to have sex with him when she was 15 and Gabel was 26.

Gabel acknowledged that there had been an inappropriate relationship but denied any abuse, saying the relationship was consensual.

Farrell is glad that Gabel acknowledged publicly that he had acted inappropriately, “but he hasn’t contacted me at all or directly apologized to me, so that’s lacking,” she said. She believes that Gabel should also relinquish his membership from US Speedskating and be removed from the Speedskating Hall of Fame. US Speedskating has hired a law firm to investigate the accusations against Gabel.

The process of bringing Farrell’s story to light was “the most intense reporting experience I’ve had in more than 20 years in the business,” Teich said. He commends Farrell for coming forward and said he hopes her story hits home in the place where he first met her.

“You can go to the speedskating rink and see the people who are her age when she was abused,” he said, “and you’d be crazy if you didn’t hope that this interview might make life easier for them someday.”