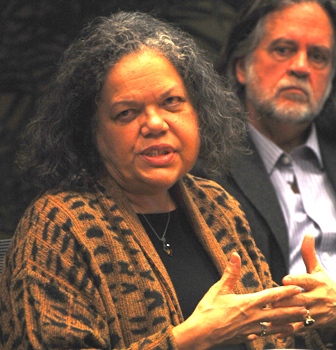 Marita Rivero, vice president and general manager for radio and television at producing powerhouse WGBH, is stepping down after nearly 30 years at the Boston station.

Effective in June, Rivero will be succeeded by Liz Cheng as g.m. for television and Phil Redo as g.m. for radio. Cheng is currently g.m. of WGBH’s national digital multicast channel World, which she will continue to oversee. Redo is managing director of 89.7 WGBH and WCAI.

“Marita’s leadership and commitment have exemplified the highest ideals of our public service mission,” WGBH President and CEO Jon Abbott said in the statement. “She has an outstanding legacy of service to WGBH and the communities we serve, having led with insight, principle and wisdom in creating programs and launching new initiatives.”

Rivero was responsible for developing signature programs such as The World on 89.7 FM, a collaboration with BBC World Service and PRI; the nightly TV news show Greater Boston; and the academic competition High School Quiz Show on WGBH 2.

She began her career at WGBH in 1970 as a producer for Basic Black, then titled Say Brother, a public affairs television program focusing on issues of importance to the African-American community.

She also worked as general manager of WPFW, Pacifica Radio in Washington, D.C., from 1981-88.

Rivero is on the NPR Board and chair of the National Black Programming Consortium Board.

“WGBH provided me with the wonderful opportunity to be part of a talented group of people involved in the important work of education, civic leadership, and joyful engagement with life’s cornucopia,” Rivero said in the announcement. “I’ve been proud to help gather a rich array of voices to be considered as part of our public discourse.”

Pruess spent a decade at WNIT from 2002 to 2012. Previously, she served in several managerial positions at WHRO-TV in Norfolk, Va., and was deputy director of TRAC Media Services in Tucson, Ariz.; c.e.o. of the Public Television Programmers Association; and program manager at KHUT-TV in Houston.

She signs on as WQPT director April 22, succeeding Rick Best, who retired in June 2012. Jamie Lange, who stepped in as interim general manager, will return to her role as chief development officer.

The Association of Independents in Radio (AIR) has appointed Jennifer Ferro, general manager of KCRW in Santa Monica, Calif., to a three-year term on its board of directors.

Ferro will serve as vice president of the 15-member board.

“KCRW was an AIR incubator for the Localore/Sonic Trace production and, since her tenure as g.m. began in 2010, she has continued to carry KCRW’s torch as a champion of independent talent,” said Sue Schardt, executive director of the Boston-based AIR.

The executive committee recommended Ferro to the full board, which approved her unanimously.

Ferro has also served on the board of DEI.

Susie Hernandez, a past president of the Public Television Programmers Association, will join KQED in San Francisco as associate program director.

She exits Tucson-based Arizona Public Media, where she has directed TV programming since 2010, to return to the Bay Area. Hernandez previously worked at Independent Television Service in San Francisco in several capacities, including as director of broadcast for more than a decade. She was also assistant auction manager at KRCB in Rohnert Park, Calif. Hernandez begins work May 1.

The new position “represents a larger strategic shift under way within our network to significantly advance our mission of providing exciting new and unique content to Connecticut and the nation,” said Dean Orton, CPBN c.o.o. CPBN’s plans include launch of an online news service.

The Mirror is located within CPBN’s Hartford headquarters and shares content with the network’s public radio service on WNPR-FM.

Prior to his work at the Mirror, Cutie was managing director of Plum Capital, a Philadelphia-based venture capital firm, and was co-founder and president of Press Point, a global digital publications distributor based in New York City.

Thurston Briscoe is no longer at WBGO-FM in Newark, N.J. His last day was March 8. Briscoe had served as the station’s program director for 23 years. When asked by Current whether Briscoe left on his own accord, General Manager Cephas Bowles said, “Let us say that he is no longer at the station. That’s our position right now.”

The governing board of Iowa Public Television has promoted Communications Director Molly Phillips to lead the state network as its director and general manager. Phillips succeeds Dan Miller, who announced his retirement last year after nearly four decades at the network. Phillips will be the first woman to lead IPTV. She joined the station in 1990, moving from its business office to director of communications in 2001.

Marketplace’s Wealth & Poverty desk has a new reporter, Noel King, who previously worked as a managing editor for WNYC’s The Takeaway. In 2011, she was a member of The Takeaway staff that was recognized with a Radio Television Digital News Association UNITY Award for coverage of issues affecting communities of color. King also covered Egypt’s transition to democracy as a Cairo-based freelance reporter for radio, television and print outlets; her reports aired on the BBC World Service, PRI’s The World and The Takeaway, NPR, CBC radio and television, and CBS radio.

Esmé Artz is now public information coordinator at WHYY in Philadelphia, where she is responsible for all media relations.

She began her career in 2007 as an intern at the station. Artz has also worked in New York City as a publicist at Brainerd Communicators, and in the press department for Paper Mill Playhouse, a nonprofit theater in Millburn, N.J.

Most recently, she handled communications and marketing for the Heritage Conservancy, a conservation organization in Bucks County, Pa.

Matt Thompson, manager of digital initiatives at NPR, has accepted an adjunct teaching position at the American University School of Communication (SOC). “Thompson was recruited to teach at SOC for his deep knowledge, adventurous initiative and for his success at teaching and coaching learners on managing new media’s ever-changing face,” according to the announcement. He’ll be teaching media technology management during the summer semester for students in the new Master’s in Media Entrepreneurship program. SOC also recently hired Pulitzer Prize-winning reporter John Sullivan as Investigative Journalist-in-Residence. As of May 1, he’ll join SOC’s Investigative Reporting Workshop, which produces investigative coverage for news outlets such as Frontline. SOC Dean Jeff Rutenbeck said the hiring puts Sullivan “at the center of an unprecedented teaching model adopted by SOC in partnership with the Washington Post and the Workshop” to integrate academia and the news industry. Under the joint hire, Sullivan will serve as an in-residence faculty member with American’s SOC, an investigative reporter for the Washington Post and a senior editor for the Workshop. Sullivan will teach a graduate-level Investigative Reporting Practicum beginning this fall. He previously was on the faculty of the Medill School of Journalism at Northwestern University, Evanston, Ill. (Disclosure: Current is published by AU’s School of Communication and managed as an independent journalism center.)

Please send People items to sefton@current.org
This article was first published in Current, April 15, 2013, with the addition of the item on WGBH’s Marita Rivero, which originally ran online.
ShareTweet EmailPrint More