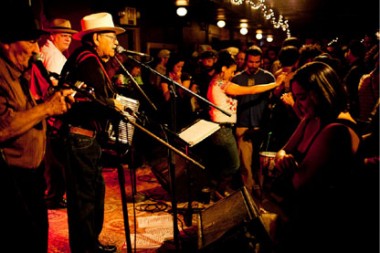 With Austin Music Map, KUT reaches audiences that it previously had little contact with, such as players and fans of conjunto, a Texas-bred style of jaunty, accordion-driven music. Above, Conjunto Los Pinkys performed during Map Jam. (Photo: Mary Kang)

Austin, Texas, is well known as a hive of musical talent, with artists such as Spoon, Okkervil River and Willie Nelson representing it on the national stage.

But residents know that another side of Austin’s music teems behind that outward-facing image, with lesser-known local performers in all kinds of genres putting on shows in bars and restaurants and convening on the spur of the moment at dances and house parties.

That world is now being shared with a global audience thanks to Austin Music Map, a website developed by the city’s public radio station, KUT. It invites Austinites to contribute audio, video and photos documenting their explorations of the lesser-known corners of the city’s music scene, with KUT producers contributing their own content as well.

The site’s welcome page (austinmusicmap.com) presents a map dotted with red blots, representing KUT features, and blue blots for community-contributed material. Clicking around can bring up a hilarious video of air guitarists strutting their stuff at a raucous competition, a panoply of bluegrass musicians discussing a popular recurring jam session, and a tranquil folk ballad accompanying beautiful, panoramic photos of Austin at dusk.

“We think of the AMM as a living, evolving document of Austin’s live music culture — and a way to preserve places and experiences that might otherwise be lost, as the city continues to grow and change,” wrote AMM producer Delaney Hall in an email.

The site stems from a collaborative partnership between Hall and KUT, who were brought together by Localore, the CPB-supported initiative by the Association of Independents in Radio to foster innovative multimedia projects between stations and independent producers.

Like several other Localore projects, AMM was built with Zeega, a software platform designed for developing collaborative, media-rich sites. “They were great for us, especially because they’d worked on Mapping Main Street,” Hall said. That 2009 project, supported by AIR, also merged mapping and user-generated content and gave birth to Zeega.

“Our project is interested in geography, place and culture and in ways that people can collaborate with a community on a documentary project,” Hall said. “[Zeega] was instrumental in helping us figure out how to approach our own reporting and how to involve the community in reporting as well.”

“There’s music being made here all the time, in all kinds of places,” said Hawk Mendenhall, assistant g.m. at KUT. “This not only tries to spotlight that, but it encourages the community to put it on the map.”

Mendenhall first learned of Localore at the 2011 Public Radio Program Directors conference in Baltimore. KUT joined the slate of participating stations and discussed projects with three producers, all of whom envisioned a multimedia project that would combine music and mapping. Hall’s idea was the most fleshed out, Mendenhall said.

As AMM was getting started, Hall was working with the Third Coast International Audio Festival in Chicago as interim artistic director and as a producer on Re:sound, the Festival’s weekly podcast and radio show. She had lived in Austin previously and wanted to explore its image as a live-music mecca and “the way that music is woven into the lived experience of Austin.”

The site launched in November and has since accumulated 1,500 submissions from amateur documentarians. Photos make up the bulk of user-generated content, with some sound clips and less video in the mix. About forty photographers contribute regularly, Hall said.

The site aims to make it easy to add content. It plugs into existing media sites such as Instagram, SoundCloud, YouTube and Flickr, where users can tag uploads with “AMM.” The main AMM site crawls those sites for new items, and producers approve and geotag items to add them to the master map.

“It’s become a really valuable community asset,” Mendenhall said. “More and more people are taking advantage of it.” It’s also received attention in local press. And KUT has been using AMM to reach out to new audiences it’s otherwise had little contact with, such as players and fans of conjunto, a Texas-bred style of jaunty, accordion-driven Mexican-American music.

AMM has spawned several related projects that take it beyond the Web and out into the community it covers. In November, KUT asked listeners to submit sounds that they considered auditory signatures of Austin, and received recorded snippets of mopeds, bats, squirrels and espresso machines. It then commissioned local musicians to work the sounds into songs. The resulting compositions were compiled on a CD that was released at the South by Southwest festival in March.

And in February, AMM sponsored Map Jam, a free daylong festival featuring local musicians performing in a variety of venues, including a brewery, a park and a bike shop as well as on traditional concert stages.

AMM’s first year of funding has ended as the initial phase of Localore wraps up, but KUT is looking for additional grant support from the National Endowment for the Arts and a second round of Localore support, which would be provided in partnership with the Independent Television Service. The site also scored a nomination for a Webby Award in the Music category, putting it alongside outlets such as NPR Music and Pitchfork.

“People are totally into it,” Mendenhall said. “It’s going to continue to grow.”