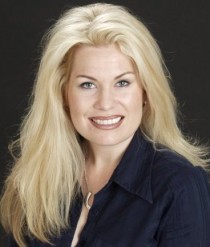 McMahon taps her connection to the "other side" when consulting with callers.

McMahon taps her connection to the “other side” when consulting with callers.

The last caller to the March 19 episode of Second Sight, a weekly show on Long Island’s WPPB-FM, gets right to the point. “Any more babies for me?” Cheryl asks.

Host Christiana McMahon responds with equal readiness. “I feel like there is a son for you that’s around. Have you felt this? You know this. You’re feeling this, I get that.”

“Well, I have two beautiful children and I’ve been blessed and all that,” Cheryl says. “But oh, one more would be so nice.”

“I feel a male energy around you,” McMahon says. “When you asked me the question, I get a lot of destiny around it. So my sense is it’s going to happen. . . . And I’m getting probably within the next two years.”

WPPB’s listeners can listen to Morning Edition or the BBC Newshour if they want to know what’s happening now. But if they’re looking for an inkling of what’s going to happen, they can ask McMahon.

As the host of Second Sight since September 2011, McMahon is probably the only psychic and medium with a show on a public radio station. For a half-hour starting at 5:30 p.m. every Tuesday, she fields calls from listeners who want to know whether they’ll have children, get jobs or find love. And by reading their energy over the phone, she does her best to tell them what to expect.

“It’s a lot to take in because I feel like I have one foot on the other side and one foot here,” McMahon says. “It can be challenging.”

The response from WPPB’s listeners has been overwhelmingly positive, says G.M. Wally Smith. The station’s phone lines are jammed every show, he says, and only a few skeptics and naysayers have complained that the station gives airtime to a psychic.

McMahon says she was about 6 years old when she realized that she had an ability others didn’t have: She could communicate with animals and see spirits of dead people.

But she learned to repress her powers when she realized that people didn’t always want to know what would happen to them. As a fourth-grader in Catholic school, she tried to get on her teacher’s good side. “I walked up to her and said ‘Your fiancé is leaving you in a week, and I’m really sorry,’” McMahon says.

That led to a trip to the principal’s office. Though McMahon’s prediction proved accurate a week later, “I realized very quickly that I was not going to get points by giving people that kind of information.”

Instead, her intuitive connection with animals led to a career riding horses, and she ended up working in the stables of the royal family in Dubai. After a bad spill while riding, she decided it was time to seek another line of work. An astrologer told her she wouldn’t be happy until she embraced her psychic gifts.

“It hasn’t been easy, but I finally came around to accepting that that’s who I am,” she says.

Her introduction to WPPB came during a visit to the Hamptons to check out the polo scene. She met WPPB host Bonnie Grice, who invited her on her program to answer questions from callers.

After several appearances on the show, McMahon asked Smith for her own program. When he replied that she needed to live in the area to get a show, she moved.

“From the response we’re getting, it’s apparently something that people are interested in,” says Smith, who notes that he’s never been one to shy from controversy. In the ’90s, as g.m. of KUSC in Los Angeles, he installed an eclectic-music format that polarized listeners and ultimately didn’t pan out.

People can decide for themselves whether McMahon’s predictions are legitimate, he says. “But it certainly sounds convincing in most cases.”

Callers ask about their love lives and family members, but McMahon also gets inquiries from Wall Street executives asking about trading stocks or whether to hire a job candidate.

When she gets complaints about her predictions, they usually come from callers who say she misjudged the timing of an event. A caller might say she met her boyfriend in a few months when McMahon predicted a few weeks. “And I say, ‘Well, you met him, right?’”

McMahon is now in discussions with a national TV network about a show on crime investigations. It’s a line of work she can handle, she says, but it’s not her favorite. She doesn’t see her ability as all that unique — it’s just that most people rely too much on their intellect.

“I believe that we all have intuition,” she says. “I’m kind of the Michael Jordan of that.”