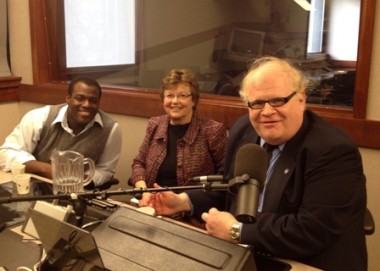 WXXI and WDKX in Rochester, N.Y., are very different stations serving very different audiences — and that’s a big reason that their unusual seven-year partnership continues to yield winning results for both broadcasters.

The public broadcaster, WXXI, first approached the commercial radio station, WDKX, in 2006 to team up on covering a mayoral race in the city. Since then, the two have continued to collaborate on examining race, politics, education and other community issues in a partnership that amplifies the voice of both stations and boosts their newsgathering capabilities.

WDKX’s Tariq Spence, left, and WXXI’s Bob Smith teamed up to interview Kate Bennett, president of the Rochester Museum and Science Center, about a traveling exhibit on race that was hosted by the museum. (Photo: Jeanne Fisher, WXXI)

At first glance, the two seem to be unlikely partners. WXXI operates both TV and radio stations; it airs news and public affairs on its AM signal for an audience that’s 81 percent white and 16 percent African-American. The locally owned WDKX airs mainly hip-hop and R&B for an audience that’s 60 percent African-American and younger than WXXI’s. It frequently is among the top-rated stations in the city.

But by partnering, WXXI has been able to get its news coverage and personalities in front of WDKX’s audience, who otherwise might not tune in for public radio fare. And WDKX has boosted the local news on its airwaves by drawing on the resources and connections of WXXI’s bigger news team.

Tariq Spence, a morning host on WDKX, says he doesn’t know many Rochester residents who regularly listen to both his station and WXXI. But his appearances on WXXI’s TV channel have prompted people to approach him and say they recognize him. He sees his role as representing the concerns of WDKX’s listeners for WXXI’s audience.

“It’s definitely brought a lot of different audiences that don’t normally listen to each other together,” Spence says. “That’s why we did it, and we’ve gotten out of this what we both wanted.”

Founded in 1974, WDKX has a long history of community service and has remained locally owned, even as many commercial stations around the country have been absorbed into larger conglomerates. Its founder chose its call letters to honor three heroes of the struggle for African-American rights: Frederick Douglass, Martin Luther King Jr. and Malcolm X.

WXXI initially approached WDKX to expand its coverage of city politics. The public station’s signal covers the entire city, but most of its audience lives in the suburbs and doesn’t vote in city elections. So WXXI was looking to reach a more urban audience — one like WDKX’s.

The resulting partnership brought together The Water Cooler, Spence’s morning show on WDKX, with 1370 Connection, a call-in talk show on WXXI. Both stations’ hosts co-helmed an election special that featured interviews with the mayoral candidates, simulcast on both stations.

The response to the simulcast was “unbelievably overwhelming,” says WXXI’s Fisher. For some time afterward, listeners called the stations asking for more joint coverage.

“WDKX listeners really appreciated the broader coverage and resources that we could bring to the program, because they’re a music station and don’t have a news department,” Fisher says. “Our listeners particularly appreciated hearing more from the inner-city and younger folks who called in.” The show brought in more calls from high school and college students than most WXXI shows, she says.

WDKX and WXXI extended their partnership through election night, when they simulcast coverage using a fiber-optic link newly installed between their studios.

The next year, the stations expanded their teamwork to cover education. In January 2008, they staged “Brizard: Square One,” a full day of coverage focused on Jean-Claude Brizard, then the new superintendent of Rochester’s school system. It began with Spence hosting a morning program at a high school, taking calls from young WDKX listeners. Brizard then appeared on WXXI during Morning Edition for an interview.

The stations also co-produced a 2009 public forum featuring local school board candidates. And in 2011 they staged a town hall meeting and TV show, The Dropout Dilemma, a tie-in with the CPB-backed American Graduate initiative.

More recently, the broadcasters tackled a thornier issue with joint coverage of “Race: Are We So Different?”, a traveling exhibit that examines the concept of race through the lenses of science and history (Current, Jan. 28).

To mark its opening in Rochester last month, WXXI and WDKX are producing four hourlong shows about racial issues throughout the city’s history, including busing, politics and riots that occurred in 1964. The shows are airing on both stations. Hosts from the two stations also appeared at a public panel discussion and film screening last month.

“This is something that everybody may have an opinion on, but not everyone is comfortable talking about,” says WDKX’s Spence. “But WXXI is going straight in on it. That’s very rare.”

Racial issues come up often on Spence’s show, but few other media outlets discuss them, he says. WXXI “could leave the topic alone and no one would say a word. It takes bravery, the fact that you want to do something different and get a different perspective, even if it means some people may be uncomfortable with the topic,” he says.

WXXI’s work with WDKX hasn’t necessarily helped the public broadcaster grow its audience significantly, says WXXI’s Fisher. But its other payoffs, such as increased awareness among key community members, are equally important.

Local healthcare agencies now see WXXI as a valuable media partner, she says. Its collaboration with WDKX, for example, led to a partnership with an agency that coordinates services for the developmentally disabled; the agency provided funding for WXXI projects and helped the station gather information and get access to other partners.

The WDKX partnership has also strengthened WXXI’s ties to Rochester’s public schools. If the school system gets coverage on both WXXI and WDKX, “we’ve essentially covered 95 percent of the radio listening audience in Rochester,” says Linda Dunsmoor, director of recruitment for the Rochester City School District.

Despite the benefits to both stations, Fisher says she’s not aware of similar partnerships between commercial and public broadcasters elsewhere in the country. A sense of competitiveness can often intrude, but WXXI’s experience points to what can be gained if such rivalries can be overcome.

“We can do so much more when we all work together than if we all just work in our silos,” Fisher says.