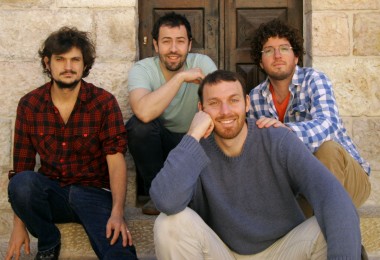 Among the new radio programs inspired by This American Life are two productions for listeners who don’t speak English.

Both Israel Story, which recently secured a time slot on Israel’s most popular radio station, and Radio Ambulante, a Spanish-language podcast that’s angling for broadcast distribution in Latin America and Spain, launched after receiving some guidance and helpful advice from Ira Glass and company.

Mishy Harman is the driving force behind Israel Story, a show produced in Hebrew by four young men with no prior journalism or radio experience. Harman was inspired to create the show after listening to some 200 TAL podcasts during a 13,000-mile road trip around the United States. The friend who introduced him to This American Life and downloaded the podcasts is also an Israeli, Ro’ee Gilron. While in college, the pair had collaborated in developing a mobile app.

During his listening tour of America, Harman says, “it became totally clear to me that this was going to be our next project.”

After listening to This American Life podcasts during a roadtrip across the United States, Mishy Harman, second from the left, was inspired to begin producing audio stories. He created a series for Israel’s Army Radio with, from left, Yochai Maitai, Ro’ee Gilron and Shai Satran.

Harman tried pitching a story to This American Life about his experience hitchhiking around Europe and Asia by standing roadside with a sign that said “Anywhere.”

The story was rejected by TAL, but Harman learned from the experience. He describes Glass’ comments about his proposal as “unbelievably shrewd,” and he praises the man’s “laser focus.” His hitchhiking story was included in the first episode of Israel Story.

Harman and his friend looked to TAL for ideas for other stories that they went on to produce, including one about an all-night pancake house in Herzliya. It was inspired by a TAL piece set in a New York State Thruway rest stop in Plattekill, N.Y. One TAL producer warned that producing the story was extraordinarily difficult, but the young Israelis persisted.

To secure a broadcast commitment in Israel, Harman channeled enough chutzpah to make up for his lack of a track record. When he learned that the head of Army Radio, Israel’s most popular radio station, would be speaking at a library, Harman ambushed the broadcast exec and convinced him to listen to a pilot episode.

Army Radio commander Yaron Dekel offered Harman and his three colleagues a contract to produce a 12-episode season of the show, to air on consecutive Fridays afternoons at 3 p.m. The time slot is considered one of the best of the week because people are home preparing for the Jewish Sabbath.

TAL’s producers also provided guidance to Radio Ambulante executive producer Daniel Alarcón. The novelist and Peruvian native lives in San Francisco, but traveled to TAL’s Manhattan headquarters last fall to “see how the sausages were made.” Observing TAL senior producer Julie Snyder as she worked with a reporter to select tape for a story on Chicago schools was a valuable experience, Alarcón told Current.

The Radio Ambulante team works out of the studios of San Francisco’s KALW, and includes collaborators in Colombia, Ecuador and Mexico.

In a Kickstarter fundraising campaign last year, backers contributed $46,000 towards production of 12 monthly programs. In addition to offering the shows as podcasts, Alarcón hopes to secure carriage on radio stations in Latin America and Spain as well as the U.S.

In a Radio Ambulante fundraising benefit scheduled for Feb. 5, novelists Junot Díaz and Francisco Goldman will participate in an evening of Latin American storytelling at Instituto Cervantes in New York.