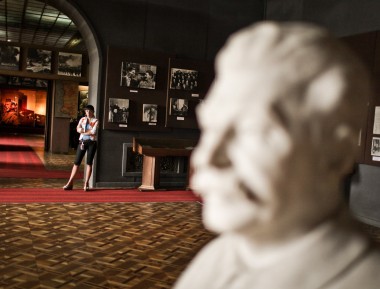 A new hourlong special offered via Public Radio Exchange, Generation Putin: Young People and Change in the Former Soviet Union, takes listeners to a few places they might never visit otherwise – including a punk music show in Kazakhstan, the first gay bar in Central Asia and a protest staged by topless radical feminists in Kiev, Ukraine.

The show stems from a grant PRX received in the fall of 2011 from the Open Society Foundations, backed by liberal philanthropist George Soros. OSF was looking to support more international journalism and approached PRX to discuss possibilities.

PRX sought to devote the funds to reporting that would fill gaps in public media’s existing international coverage, and would remain fresh despite the yearlong production cycle anticipated for the project, says John Barth, managing director.

The online marketplace for public radio programing considered Mexico, for example, but decided that the CPB-backed Fronteras collaboration was already covering that area well. Russia, on the other hand, was getting less attention.

As PRX pondered its options, members of the Russian feminist punk band Pussy Riot were imprisoned after making a video of a song critical of President Vladimir Putin. Their persecution prompted protests in Russia and around the world, and sparked an outcry among younger Russians in particular. PRX wanted to examine attitudes among millennials of Eastern Europe, who face an uncertain future as their countries struggle to find footing following the demise of Communist and totalitarian regimes, Barth says.

“You’re looking at a mood ring of the post–Cold War world that these populations are dealing with,” Barth says.

To find its reporters, PRX got in touch with the Common Language Project, a nonprofit multimedia journalism organization based at the University of Washington in Seattle that had previously contributed programs to PRX. Generation Putin producers Jessica Partnow, Sarah Stuteville and Alex Stonehill are all CLP co-founders and share reporting credits for public media outlets including NPR, PRI’s The World, Frontline/World, Living on Earth and Seattle’s KUOW.

Partnow and Stuteville traveled through Russia, Georgia, Kazakhstan and Ukraine for a month for Generation Putin. They spoke with young Russians whose political alliances varied but who shared an appetite for change and a louder voice in the debates about Russia’s future.

They also found strong affinities between American and Russian youth culture. Patrons of a hipster bar were sporting “skinny jeans and ironic mustaches.” At the punk festival in Kazakhstan, “we might as well have been in Seattle,” Stuteville says in voiceover.

“Except there were horses running around all over the place,” Partnow adds.

PRX recruited On the Media’s Brooke Gladstone to host the program. Her show’s continuing coverage of press freedom and Gladstone’s background as a Moscow-based reporter for NPR aligned well with the editorial focus of Generation Putin. Editor Martha Little, a veteran of Marketplace, Day to Day and Boston’s WBUR, has covered Russia as well.

As of last week, 14 stations had licensed Generation Putin from PRX. The vendor intends for the show to remain timely for a year, Barth says.

PRX also used the OSF grant to support its Global Story Project, an open call for both short- and long-form reports from journalists outside the U.S. It received 200 pitches in response. The resulting stories, which include submissions from India and China, will be available by early next month.