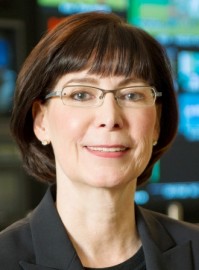 The NPR Board elected Kathryn “Kit” Jensen of Cleveland’s ideastream stations as chair for the new board term that began last month.

Paul Haaga, a public director who joined the board last year, was elected vice-chair.

Jensen, a public radio veteran who was elected to the board in 2010 and co-chaired the executive search committee that recruited Gary Knell as NPR president in 2011, led Cleveland’s WCPN-FM through its merger with the city’s public TV station WVIZ more than a decade ago. She is c.o.o. of the combined operation and also directs Radio Seaway, licensee of classical station WCLV, which is converting into a noncommercial operation next month.

Jensen succeeds Dave Edwards of Milwaukee Public Radio as chair; Haaga, chair of the Los Angeles–based investment firm Capital Research and Management Company, succeeds Carol Cartwright, a public director and university educator from Kent, Ohio, as vice chair. Both Edwards and Cartwright left the board after their terms expired; their seats were filled during NPR Board elections this summer.

In her first public remarks to the NPR Board as chair, Jensen said she plans to focus on shoring up NPR’s finances and developing a new strategic plan. “My priority is a future where we provide this organization with a solid financial base, where we continue to live our mission to create a more informed public, and where we adapt to evolving media platforms that will allow us to more efficiently serve the public we are committed to,” she said during the Nov. 9 board meeting at NPR headquarters. “We’re going to do this by creating a new strategic plan that will enhance our ability to work with member stations.”

As board vice-chair, Haaga oversees the finance and administration committee. Several other NPR directors are taking new leadership roles on other board committees: Florence Rogers of Nevada Public Radio chairs the audit committee; Caryn Mathes of WAMU in Washington, D.C., the distribution/interconnection committee; Patricia Diaz Dennis, a lawyer and public director who joined the board last year, the human resources committee; and Greg Petrowich of WSIU in Carbondale, Ill., the membership and governance committee. New Hampshire Public Radio’s Betsy Gardella chairs the resource development committee, which now has an expanded charter to oversee corporate underwriting, marketing, public funding and other revenue-generating activities.

In another change in governance at NPR, Connie Walker, g.m. of WUNC in Chapel Hill, N.C., has taken the member-director seat that opened with Jose Fajardo’s departure from the board in late October. Fajardo, who led WMFE through the sale of its public TV station, resigned as he prepared to leave his job as president of the Orlando station (Current, Nov. 5).

Walker was among the candidates nominated for election to the NPR board earlier this year. She will serve the remainder of Fajardo’s term, which expires next November, and will be eligible to stand for re-election, according to Danielle Deabler, NPR spokesperson.

Award-winning puppeteer Kevin Clash resigned from Sesame Workshop Nov. 20 after a second man accusing him of sexual improprieties filed a lawsuit against him.

The accuser, identified in court documents as Cecil Singleton, alleges that Clash persuaded him “to meet for sexual encounters” when he was 15. Singleton’s lawsuit was filed in U.S. District Court in New York and seeks damages of more than $5 million. A week later, a third accuser, identified only as a male Florida resident, filed a lawsuit against Clash.

Sesame Workshop announced Clash’s resignation Nov. 20 shortly after news of Singleton’s lawsuit broke. “Unfortunately, the controversy surrounding Kevin’s personal life has become a distraction that none of us wants, and he has concluded that he can no longer be effective in his job and has resigned from Sesame Street,” the Workshop said in a statement. “This is a sad day for Sesame Street.”

Clash, who rose to acclaim as the puppeteer behind Sesame Street’s furry red Elmo, said in a separate statement that he resigned “with a very heavy heart.”

The first allegation that Clash had pursued sexual relationships with an underage boy surfaced Nov. 12. Clash took an indefinite leave from his role on Sesame Street and the accuser retracted the allegation the next day.

The documentary film project, unveiled Nov. 15 with a crowdsourcing appeal to Beatles fans and collectors to share archival materials and recollections of live performances by the Fab Four, will focus on the experiences of fans who attended Beatles concerts from 1963–66.

White co-owns OVOW Productions, which is soliciting films, photographs, audio recordings and personal stories for The Beatles Live! Project. He’s working at the University of Maryland and collaborating with digital humanities groups to develop crowdsourcing technologies.

“This is a good example of where I was looking to take the American Archive,” White told Current, “to dig deep into the legacy programming of the public media archives, searching for lost or forgotten media that would surprise and engage contemporary audiences.” For more information, visit TheBeatlesLiveProject.com.

“The Beatles are a great example of archival value,” White added. “The world wants to see the films and photos and sounds that were captured 50 years ago. There are other such programs to be researched, made and delivered to public audiences.”

The acronym in OVOW Productions comes from “One Voice One World,” a reference to the British band’s final live televised performance on June 25, 1967, seen via satellite by some 350 million viewers.

Anne del Castillo has departed American Documentary Inc., the nonprofit production house behind PBS’s POV, to join the 14th Street Y in New York City. In her new position, Castillo will direct development for the Y. “As a thriving center of Jewish culture, with innovative programs in the arts, education, health and wellness and community development, the 14th Street Y is a vital community resource that embodies the spirit of the East Village,” she said in a statement. Del Castillo arrived at POV in 2002 as manager of research and development, ascending through the ranks to become v.p. of development and business affairs in 2011. During her tenure, she built a full-time development team and secured more than $470,000 from the City of New York to develop a public programming space and editing facilities at American Documentary’s new headquarters in Brooklyn. Del Castillo began her pubcasting career in 1993 as an intern at WNET’s American Masters in New York City. She was hired as production office manager in 1994, then moved to Boston’s WGBH in 1995 to join the staff of Frontline as series coordinator. In 1998 she relocated to Austin, Texas, where she was active in the independent film scene until 2002. She has participated on funding panels for various public media grant-makers, such as the Center for Asian American Media, the Independent Television Service and the National Endowment for the Arts.

Brooke Runnette, a former Frontline producer, is the new president of National Geographic Television. Runnette worked at the WGBH-produced investigative documentary series from 1999 to 2000 and moved from there to ABC News Nightline. She later became executive producer of shows including Little People, Big World at TLC/Discovery Communications and most recently served as e.p. and director of development at Discovery Channel. She joined National Geographic Channels as a v.p. of development and special projects just last month.

Daniel Gilliam has returned to Louisville Public Media to direct programming at WUOL-FM, Classical 90.5. Since leaving LPM in 2010, Gilliam served as p.d. of Minnesota Public Radio’s classical-music service; he oversaw Classical MPR’s regional staff and led statewide engagement initiatives. He created Classical MPR’s first education initiative and developed new programs, such as the video-game–music podcast Top Score and the movie-music show Roll Credits. During his first stint at WUOL, 2005–10, Gilliam held various positions including station manager and afternoon drivetime host. He’s also a trained composer and singer and has written for the Turin Philharmonic in Louisville as well as the city’s Youth Choir.

Actress and soprano Audra McDonald, winner of five Tony Awards and two Grammys, is the new host of Live from Lincoln Center. McDonald will appear on seven broadcasts from December 2012 through spring 2013. The PBS performance series, produced by New York’s WNET, has been without a regular host since the 2007 death of opera star Beverly Sills. She’s appeared on Live from Lincoln Center numerous times. McDonald also co-starred in the ABC television drama Private Practice.