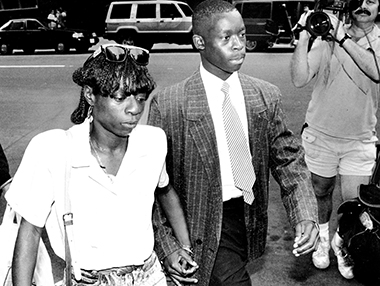 Antron McCray, right, was one of five men wrongfully convicted for the 1989 rape of a jogger in New York's Central Park. In The Central Park Five, in theaters now and coming to PBS in 2013, McCray narrates the story of his legal ordeal. (Photo: New York Daily News via Getty Images)

Antron McCray, right, was one of five men wrongfully convicted for the 1989 rape of a jogger in New York’s Central Park. In The Central Park Five, in theaters now and coming to PBS in 2013, McCray narrates the story of his legal ordeal. (Photo: New York Daily News via Getty Images)

The Central Park Five, written and directed by Ken Burns, his daughter Sarah Burns and her husband, David McMahon, is not one of his production company’s typical stately paced works. The film chronicles the 1989 arrests, coerced confessions and convictions of five innocent black and Latino teenagers accused of beating and raping a jogger in New York City, and it mounts a quick-cut, impassioned indictment of law enforcement, the media and the public at large.

“It has a kind of anger and energy to it that calls for faster-paced editing,” said David McMahon, who previously collaborated with Ken Burns in producing The War, The National Parks and other PBS productions. But the filmshares a focus on racial issues with other works of Burns’, McMahon said.

One of the filmmakers’ goals for The Central Park Five was to produce a shorter, more easily digested film. “We were hopeful that it would be something that would fit into two hours. We wanted to take it to theaters, and we wanted people to be able to sit and look together and begin a conversation right there, in the theater,” McMahon said.

The charges against the Central Park Five were dropped in 2002, when the actual perpetrator confessed to the crime. The following year, the men — who since the 1989 trial had spent the bulk of their lives in prison — filed a $50 million civil suit against the city of New York.

Sarah Burns learned of the case while working as a paralegal during the summer of 2003. Her book about the case was published in 2011.

The film features extensive interviews with all five of the formerly accused, who narrate much of the story. Only one declined to be shown on camera.

“The Five were really ready to talk about it, I think. Not that it was easy for them, but I think being given the opportunity to have their say was appealing to them,” Sarah Burns said.

No one from the city, however, was ready to talk. Owing to the ongoing civil suit, none of the key figures in the arrest or prosecution of the Central Park Five would speak to the filmmakers.

On Sept. 12, the city subpoenaed the filmmakers for outtakes from the movie. Celeste Koeleveld, New York City’s executive assistant corporation counsel for public safety, told the New York Times that the filmmakers’ public siding with the plaintiffs demonstrated that they were acting as advocates and not journalists. McMahon and the Burnses have hired legal counsel. Being forced to share their footage would set a “dangerous precedent” for documentary filmmakers, Sarah Burns said.

“We were warned at some point that a subpoena was a possibility,” Sarah said. Still, she admitted that the showdown with New York City put the producers on unfamiliar ground, as Ken Burns’ films aren’t known for provoking the ire of government institutions.

McMahon sees a bright side: “I think the biggest impact of the subpoena is the amount of attention that it’s drawn to the Five,” he said, referring to the press coverage the film has received as a result of the subpoena.

CPB contributed 15 percent of the film’s budget, with PBS providing 5 percent and an additional 1 percent coming from the public-television–focused philanthropy group the Better Angels Society, which has supported many Ken Burns projects. The movie is now in theaters and will air on PBS in April 2013.