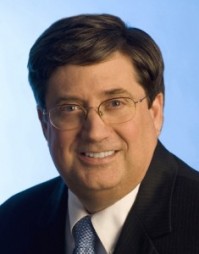 Pizzato, who left Alabama Public Television this summer after a rift with the network’s governing board, takes over in January. Feldman, who has led the station for 22 years, is retiring.

Pizzato “possesses a great depth of experience in award-winning television production, development, financial management, engineering and technical infrastructure, education and outreach, as well as leading successful new building construction and campaigns,” Jonathan McCall, chair of the WYES board, said in a statement.

Pizzato served 12 years at Alabama Public Television prior to his dismissal in June. Pizzato had clashed with the politically appointed board over a proposal to air programs from the religious right (Current, June 25). He later sued the Alabama Educational Television Commission; that complaint is currently pending in the Alabama Supreme Court.

Prior to his time in Alabama, Pizzato spent 13 years as g.m. and director of WSRE-TV in Pensacola, Fla., and seven years as station manager at WSIU-TV in Carbondale, Ill.

Jack Galmiche is the new chair of the Major Market Group, a consortium of 34 pubTV stations in the nation’s largest broadcast markets.

Galmiche, president of Nine Network of Public Media in St. Louis, leads a roster of top station executives joining the MMG board: Rick Schneider of Miami’s WPBT, who is serving as vice chair; Jon Abbott of Boston’s WGBH; Bill Marrazzo of Philadelphia’s WHYY; and Neal Shapiro of New York’s WNET. Leaving the board are Doug Price of Denver-based Rocky Mountain PBS and Don Boswell of WNED, Buffalo, N.Y.

The appointments were announced at the group’s annual meeting Oct. 1 and 2 in Arlington, Va.

NPR Librarian Kee Malesky has penned a new book, Learn Something New Every Day: 365 Facts to Fulfill Your Life.

It’s a follow-up to her 2010 tome from publisher John Wiley & Sons, All Facts Considered: The Essential Library of Inessential Knowledge, a compendium of interesting and unusual tidbits gleaned from more than two decades answering questions for NPR reporters, editors and hosts.

Malesky originally worked in administration at NPR in the late 1970s, departing to get her master’s in library science from the Catholic University of America in Washington, D.C. She returned to the network’s broadcast library in 1984. She became the staff librarian for NPR’s arts magazine program Performance Today, and then moved to the news reference library in 1990.

She has received several awards for her contributions to the profession, including the 2012 Dow Jones Leadership Award presented by the Special Libraries Association. She’s an active member of that group and Beta Phi Mu, the international honor society of librarianship.

Malesky was born Christine Mary Shields, but became “Kee” when her youngest sister was learning to talk. She has been married since 1970 to Robert Malesky, who senior-produced NPR’s Weekend Edition Sunday for 20 years.

Heidi N. Moore, New York bureau chief and Wall Street correspondent for Marketplace, has left to join The Guardian US, the domestic online version of the U.K.-based Guardian newspaper. Moore began work at Marketplace in 2011, where she reported on banking, finance and markets. Previously, she was a reporter for the Wall Street Journal covering banks and mergers, Securities and Exchange Commission investigations and major acquisitions. She also was a U.S. bureau chief for the London-based Dow Jones weekly newspaper and daily website, Financial News.

The new local host of Morning Edition on WXXI in Rochester, N.Y., is Beth Adams, one of the city’s most recognized radio voices for more than 20 years and a former co-host of WHAM-AM’s morning news show. Most recently, Adams was marketing and communications specialist at the Bivona Child Advocacy Center, which assists young victims of sexual or physical abuse. While with WHAM, she broadcast from the White House and covered two Olympic Games and the Buffalo Bills’ first trip to the Super Bowl, in 1991. In other staff changes at WXXI: Morning Edition announcer Alex Crichton becomes local host of NPR’s All Things Considered asHélène Biandudi, who previously anchored ATC, moves into a full-time reporting role for WXXI-TV’s news program Need to Know Rochester.

Claudia Marshall has left her spot as morning host on WFUV in New York City, which she has held since January 2001. “After 12 years of the 3:30 a.m. alarm, it’s simply time to move on. And to sleep in,” Marshall told listeners on the station’s website. “I have some exciting things in the works and when the time is right, I’ll share them.” WFUV’s evening host Corny O’Connell will take the 5 a.m. to 10 a.m. weekday air shift on an interim basis while the station conducts a national search. “It’s a rare opening at WFUV,” said Chuck Singleton, g.m., “and we’ll take this opportunity to consider how we can build on Claudia’s success.” Marshall’s final show was Oct. 26.

Jessica Jordan is the new midday host on WAMU-FM in Washington, D.C., taking over for veteran announcer Bill Redlin, who retired in August. Jordan previously was host and interviewer on Voice of Russia’s American Edition radio program. She also reported for WAMU from 2010 to 2011.

Dual licensee WJCT in Jacksonville, Fla., has promoted one staffer and hired another. Karen Feagins is now director of programming and production, responsible for developing, overseeing and providing continuity for all non-news programs and promotion across all platforms. Feagins joined WJCT in 2005 and has filled a variety of roles — from on-air hosting and reporting duties to writing, directing and producing. Most recently, she served as both executive content producer and local Morning Edition host. Michelle Corum is taking over those roles, providing local news, weather and traffic as well as producing spot news reports and feature pieces. Her 10-year career includes time at pubradio stations WIAA-FM in Interlochen, Mich., and KANU-FM in Lawrence, Kan. She is also currently an adjunct communication professor for the online American Public University System.

Staci Hoste is now director and general manager of Northern Public Radio, the five-station network licensed to Northern Illinois University in DeKalb. She has served as interim director since the February 2012 death of longtime station leader Tim Emmons. “When it became clear Emmons would not survive his cancer,” the university said, “he worked closely with Hoste to craft a succession plan.” Hoste arrived at the station in 2008 as director of development. She is an NIU alum.

James Morgese is the new director of educational telecommunications at Western Kentucky University, where he is overseeing dual licensee WKYU. During his long pubcasting career, Morgese spent 18 years at Rocky Mountain PBS in Denver, as chief executive and principal fundraiser, departing in 2008 to launch his own media consulting business. “I tried retirement in Florida,” Morgese told Current, “but I went crazy.” Morgese most recently served as executive director of the Charlotte (N.C.) Symphony Orchestra. In his previous pubcasting stint, Morgese sat on the boards of the Major Market Group, NETA and APTS, as well as chairing the Pacific Mountain Network board. He was also local program manager and station manager at WUFT-TV, Gainesville, Fla.

WYPR-FM in Baltimore has named Joel McCord as news director. McCord has been a reporter at the station since 2003. In his new role, he will direct an expanding staff of reporters. McCord has nearly 40 years of newsroom experience, including as a contributing editor for Chesapeake Bay Magazine, reporter and editor for the Baltimore Sun, and reporter for Capital Gazette newspapers.

KLRE-FM in Little Rock, Ark., has hired Regina Scruggs as its program director. Scruggs has more than three decades of broadcasting programming, production, operations and management experience, 20 years of that in public radio. Previously Scruggs worked for KUHF-FM in Houston, where she produced and hosted the weekly soundtrack show Music from the Movies and Live From Festival Hill, featuring performances from the major summer music series presented by the Round Top Festival Institute at Round Top, Texas. Scruggs also directed programming at the former KLEF-FM in Houston and the city-owned classical station WRR-FM in Dallas.

Shaun Yu, interim co-manager of WDPR in Dayton, Ohio, has been promoted to station president. He succeeds Georgie Woessner, who retired in June. During the leadership transition Yu has been overseeing WDPR with a station volunteer who is also a board member. “It is my honor to lead this organization, which is rooted so firmly in Dayton,” Yu said in a prepared statement. “The fact that we can boast of a full-time classical music station speaks of the extraordinary support of this community.” Search committee chair and WDPR board member Linda Menz said 30 candidates were under consideration for the job. Yu joined WDPR in 2007 as the station’s first program director. Prior to that, he served as morning host/producer at the former KBPS in Portland, Ore., now broadcasting under the call letters KQAC. He was also program director at KKJZ in Long Beach, Calif., as well as music director and midday host at that station.

Yvette Cook, v.p. and chief strategy officer of GPB Media in Atlanta, has joined the board of DEI (The Development Exchange Inc.). Cook was recently recognized as among the Most Powerful and Influential Women of Georgia in 2012 by the National Diversity Council. “Yvette has distinguished herself through great work in some of America’s most important media markets, and I believe she will be a great DEI partner,” said DEI Board Chair Mikel Ellcessor.

Dual licensee Illinois Public Media at the University of Illinois in Champaign-Urbana has hired new directors of marketing and membership.

Lisa Bralts is the new marketing chief; she previously ran the City of Urbana’s farmer’s market, and directed marketing and development for the Eastern Illinois Foodbank. She has contributed commentaries to WILL-AM, and won a 2011 Associated Press Journalism Excellence award for In My Backyard, a series about the intersection of local food and neighborhoods.

John Steinbacher will direct membership. He came to the station from the Champaign-based International Society of Arboriculture, a professional organization with 21,000 members worldwide, where he headed membership activities. He also produces and co-hosts a weekly show on local community radio station WEFT.

Bralts and Steinbacher succeed former director of membership and marketing Rita Schulte, who retired in June.