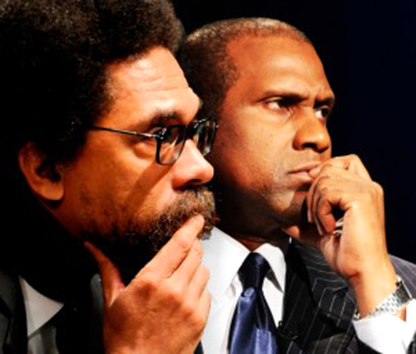 Hosts West and Smiley have riled some listeners with their comments on politics, but Smiley says the show welcomes diverse points of view.

Tavis Smiley is defending the tone and content of his weekly public radio show Smiley & West after Chicago’s WBEZ became the latest and largest-market station to drop it from its schedule.

The hourlong show, now airing on 71 stations, features longtime public radio and TV host Smiley riding shotgun with author and activist Cornel West, interviewing guests and sounding off on current events. It debuted two years ago, an offshoot of Smiley’s hourlong interview show, which he continues to host solo. Both programs are distributed by Public Radio International.

Hosts West and Smiley have riled some listeners with their comments on politics, but Smiley says the show welcomes diverse points of view. (Photo courtesy of SmileyBooks/Earl Gibson III.)

For some stations, Smiley & West’s political content has become too strident. Thirteen stations have dropped the show since June 2011, with several taking issue with the co-hosts’ political opinionating or citing complaints from listeners.

WBEZ dropped Smiley & West mostly because of a steep decline in audience, President Torey Malatia told Current. Its cume dropped by two-thirds over the past year and a half, he said, and its share by 75 percent. Shows airing before and after its noontime slot on Sundays had not seen similar declines.

Malatia can’t say for sure, but he speculated that the decline may have been due to the co-hosts’ political punditizing. “No one is against someone having a political point of view, but it does nothing to advance your vision if you’re not willing to hear an opposing point of view,” he said. “There are indications that Tavis and Cornel were going in that direction.”

Malatia also told a Chicago Sun-Times columnist that the show had been showing “multiple signs of significant sloppiness,” and recently featured “a lot of seat-of-the-pants kind of crap.”

Smiley shot back with an open letter to Malatia that circulated in the Chicago and media blogospheres. Malatia’s comments about the show were “demeaning, derogatory and dead wrong,” the host wrote.

“That’s not an explanation,” Smiley said of Malatia’s “crap” comment in an interview with Current. “That’s pejorative. That’s punitive.”

As for the cancellation of his show, Smiley questioned the timeslot it occupied in WBEZ’s lineup, an hour when many black Chicagoans could have been at church and unable to tune in, he said.

He also contested Malatia’s opinion that the show was developing an exclusive tone. The first 15 minutes of the show are devoted to Smiley and West discussing the news, but the balance of time features listener comments and interviews with guests.

Smiley & West’s website also invites interaction from listeners. “We want to be democratic and give the audience a chance to respond,” Smiley said.

Chicago Media Action, a media activist group that has often criticized WBEZ, launched a Facebook page, “‘Smiley & West’ dumped by WBEZ Chicago Public Media: Take Action.” As of this writing, it has 101 likes.

Complaints in the Midwest

Whatever the cause of Smiley & West’s cancellation on WBEZ, it had hit other speed bumps in the race to build carriage. Some stations dropped the show because it was the only PRI offering they aired apart from the BBC World Service, says Joe Zefran, producer for Smiley & West. When American Public Media took over distribution of the BBC, those stations could no longer afford the show.

However, Sam Fleming, managing director of news and programming at Boston’s WBUR, cut the show partly because it had become too political, according to comments he shared with PRI, which Zefran then forwarded to Current.

When asked by Current, Fleming did not cite politics as a reason for dropping Smiley & West, but said the station wanted to air Snap Judgment in that timeslot, in part to attract a younger audience.

KWMU in St. Louis dropped the show because it was “not good radio” and had drawn complaints from African-American listeners, according to PRI. And Minneapolis’s KMOJ, a station that targets an African-American audience, cut the program in part because listeners disliked Smiley and West’s criticisms of President Barack Obama, said Candice Breedlove, p.d.

KMOJ also lost listeners when it aired Smiley & West, Breedlove said, but the audience rebounded after KMOJ scheduled a gospel show in its time slot.

Smiley is taking the carriage declines in stride, and said none of the stations that dropped the show contacted him about poor audience or production values.

Several stations have expressed interest in recent weeks in adding Smiley & West to their lineups , he said, and the show’s social-media footprint on Facebook and Twitter has grown. He expects to secure the show’s first underwriting contracts and line up support from foundations next year.

“The fact that it doesn’t work for every station ought not to call into question the high-quality nature of the program,” Smiley said. When he introduced Smiley & West in 2010, he warned programmers that it would be different from his other programs and would include personal opinions: “I am an acquired taste.”

To Smiley, the attitudes regarding the program validate a point of view that he also shared in 2004, when he quit his daily NPR series and accused that network of not trying hard enough to diversify its staff and audience.

“Public television and public radio . . . are a wholly owned subsidiary of white intelligentsia, and people don’t want to hear it,” he said.