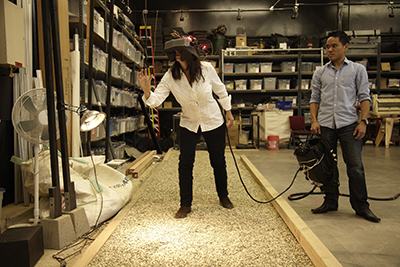 SAN FRANCISCO, Calif. — Nonny de la Peña, a documentary filmmaker and a fellow in cinematic arts at the University of Southern California, wants to make people care about world events more deeply than would be possible through the text, audio and video formats of traditional news media. So she creates her own worlds out of pixels and polygons.

“I just have a very strong belief that this is a great place to do journalism, and I think people are starting to agree,” de la Peña said. She presented her latest installation, Hunger in Los Angeles, during the Sept. 20–22 Online News Association conference, where digital journalists gathered to discuss strategies for engaging online audiences.

Works created by de la Peña are on the leading edge of applications of digital technology that bring interactivity to news, a preoccupation at ONA and for participants in the Sept. 19 TechRaking conference that preceded it. The Center for Investigative Reporting produced the daylong event, organized to explore the ways in which news can be “game-ified.” Dozens of tech-savvy participants attended breakout sessions and competed in groups to pitch the best news game.

TechRaking II: Gaming the News was held at the San Francisco offices of video-game media company IGN and co-presented by ONA and Public Radio International. It culminated with the award of $10,000 in development resources for the best game idea.

As a virtual reality designer, de la Peña attracted national attention in 2008 with her installation Gone Gitmo, an environment created within the online multiplayer video game Second Life that allowed players to subject their virtual avatars to detention in a simulated Guantanamo Bay.

WGBH’s Frontline produced a segment about the game and would later provide inspiration for her next work, the 2010 Second Life installment Cap & Trade, a playable lesson demonstrating how large corporations sidestep carbon-emissions regulations. It was based on “Carbon Watch,” a Mark Schapiro Frontline report that was jointly produced by CIR, which also helped create the game.

In Hunger in Los Angeles, the virtual reality installation that de la Peña presented at ONA, participants experience what it’s like to go without food. The sequence in which a man goes into diabetic shock while standing in line at a food bank, pictured above, is based on a real event. (Photo: Peggy Weil)

But at this year’s ONA, de la Peña arrived with something wholly different: Hunger in Los Angeles, in which participants immersed themselves, not avatars, in the experiences of those who go hungry. After strapping on goggles, headphones and a backpack and fumbling through virtual space, they watched a man go into diabetic shock while standing in line at a southern California food bank. The event actually occurred in Los Angeles, and real audio from the scene is part of the soundtrack to the six-and-a-half minute piece.

TechRaking keynote speaker David Helgason, founder and c.e.o. of Unity Technologies, said he intended his product to be the “Final Cut for games.” The comparison to Apple’s do-it-yourself movie-editing suite has held up: Since its launch, more than one million registered developers have used Unity.

To fund Hunger, de la Peña spent $700 of her own money and enlisted volunteers — including one non-actor who used motion-capture technology to re-enact every role — to donate their time. The project premiered at the 2012 Sundance Film Festival.

Hunger, with its bulky equipment and strict movement limitations (a handler must follow the participant at all times to make sure he or she doesn’t trip over anything), is an impractical method for traditional news delivery — a fact de la Peña acknowledges. She likens immersive journalism to an IMAX movie, something people would travel to a theater for and pay to experience. But she does see a future in stripped-down simulations for newsrooms and offered an example: With less than five hours of Unity programming, she claims she would be able to virtually reconstruct the events leading up to George Zimmerman’s Feb. 26 fatal shooting of Florida teenager Trayvon Martin.

Crowdsourcing, a reader-engagement practice that asks web users to participate in reporting by performing certain tasks, was also a major draw at ONA and TechRaking, as more outlets seek to adopt the technique on a large scale. Online investigative nonprofits such as ProPublica and CIR frequently develop tools and applications that invite readers to contribute to their reporting projects, generally by sifting through reams of data that full-time reporters don’t have time to examine.

ProPublica recently embarked on a large-scale interactive project to increase transparency of campaign financing with mere weeks left before the general election. Free the Files, constructed by news-application developer Al Shaw and news-applications fellow Jeremy Merrill, launched its crowdsourcing interface Oct. 1 after the Federal Communications Commission began requiring commercial broadcasters to publish details on the Web about the political ads they air.

The information is difficult to access and analyze because the FCC did not require stations to share it through a searchable database. ProPublica enlisted its readers to dig into the data by examining randomly generated files from 33 of the country’s top swing markets, recording details about who bought the ads and how much they paid. ProPublica users had logged more than $229 million in ad buys as of Oct. 10. A leaderboard on ProPublica.org records the number of files “freed” by each user, adding a competitive element.

“We wanted to make it fun,” Shaw said of the leaderboard. ProPublica’s goal was to make opening each file as irresistible as eating a potato chip, he said. Participants won’t want to stop at just one.

News applications — data-driven tools that often utilize interactive elements — are ProPublica’s most popular features, according to Shaw. The Free the Files Facebook page reveals a wide variety of people engaged in the project, including state fraud investigators, software developers and community-college instructors.

Yet the developers don’t view the project as a game. “I think the game component just adds a little bit of fun and maybe a spark to it, but it’s really about gathering the data the only way we can,” Shaw said.

We could be heroes

Digital journalists who spent an afternoon honing pitches for news games at TechRaking presented their ideas to a panel of judges, including Craigslist founder Craig Newmark and YouTube news and politics manager Olivia Ma.

“I’m not sure how many of you are into gaming, but obviously that’s a huge, huge, huge audience, one that some of our demographics would never touch,” CIR Executive Director Robert Rosenthal said during the Public Media Futures Forum of the field’s top digital-news managers Sept. 20. “And it’s a very, very engaged audience.”

During the forum, which was co-sponsored by American University’s School of Communication and the USC Annenberg Center on Communication Leadership and Policy in association with Current, Linda Fantin of American Public Media talked up a gaming hero of a different kind.

Last month, APM’s Marketplace updated and relaunched an “Election Edition” of its 2008 blockbuster game Budget Hero, which challenges players to solve the nation’s financial crisis. Fantin, who directs network journalism and innovation at APM, hopes the latest version will reclaim the audience-engagement magic of its predecessor, which counted members of Congress among its players.

“It was a major commitment, a long-term commitment,” Fantin said of the game. “But the results of that are, that game has been played more than 1.3 million times. We have an amazing amount of data, demographic data. It has brought young people into the Public Insight Network.” APM has hired a full-time reporter and a statistician to oversee the game’s continued development.

Budget Hero found success by mining fun out of a wonky news topic, just as Hairnet Hero aspires to do and just as the journalists behind Free the Files hope to accomplish.

None of the news gamers at TechRaking left the conference without a fight for the prize, though. Other pitches ranged from a SimCity-esque simulation of life as a “media mogul” to a game in which players must build a virtual consensus for positions on real-life issues.

As de la Peña’s TechRaking group began its own frantic brainstorming session, the journalist, always game for anything, offered words of assurance.