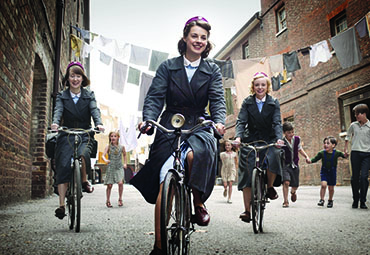 With the BBC drama Call the Midwife, PBS will test its strategy to build more audience flow on Sundays.(Photo: Laurence Cendrowicz)

PBS’s yearlong effort to build more audience flow in its primetime schedule moves into new territory this month with the Sept. 30 U.S. broadcast premiere of Call the Midwife, a limited-run BBC drama that will attempt to draw in fans of PBS’s signature drama strand Masterpiece and keep them watching an hour longer on Sunday nights.

The six-week series slides into the 8 p.m. time slot once held by Nature and more recently dedicated to specials. For five of its six weeks it will open for new episodes of Upstairs, Downstairs on Masterpiece.

With the BBC drama Call the Midwife, PBS will test its strategy to build more audience flow on Sundays. (Photo: Laurence Cendrowicz)

Set in East London and based on the memoirs of Jennifer Worth, Call the Midwife evokes an era that feels even more remote than 1957, exploring the world of an overcrowded, poverty-stricken slum where midwives work alongside an order of nuns to deliver babies and administer end-of-life care amid harsh conditions unthinkable today.

PBS program execs Donald Thoms and Beth Hoppe first saw Call the Midwife in February at BBC Showcase and they “were smitten by it,” said their boss John Wilson, PBS’s chief TV programmer. “Masterpiece would have been the logical home for it, but its pipeline of shows was full, and producers at WGBH couldn’t pick it up,” Wilson said. At that point, PBS proposed to present it as a standalone part of the Sunday lineup.

“The 1950s midcentury is fascinating to viewers right now,” Wilson said, and the stories in the series “are really touching. These are based on memoirs, so they have that ring of truth to them. And I don’t know of any higher drama than birth and death.” While the show’s first episode starts slowly — Wilson called it a “table-setting” episode — in the second installment “things really begin to click, particularly with the introduction of Miranda Hart and her character Chummy,” he said.

Neal Street Productions’ Pippa Harris (Revolutionary Road), one of the series’ executive producers, read Call the Midwife when it was published in 2007, and immediately saw its potential to be adapted for television given the “episodic nature of the stories Jennifer told” and the fact that characters in the memoir could be portrayed in an ensemble piece, she said in a telephone interview from a Winnebago on the set in North London, where second-season shooting is underway.

The series begins when a young nurse, Jenny Lee (played by newcomer, Jessica Raine), comes to live with the Anglican Sisters of St. Raymond Nonnatus, joining them and other nurses in their work with the community. Tales of the nurses’ personal lives and loves and convent life are entwined with stories of their occasionally heartbreaking cases: breech births, stolen babies and death when medical care is not immediately available.

While some material was created by writer Heidi Thomas (Upstairs Downstairs, Cranford), most of the stories were drawn directly from the three memoirs Worth wrote before she died of throat cancer in summer 2011, just before filming began. Vanessa Redgrave delivers voiceover narration taken directly from Worth’s writing to close each episode.

“The stories themselves are very naturally dramatic; delivering a baby is an inherently dramatic situation and the stakes are high,” Harris said. But the appeal, she added, is in the “wonderful blend of humor and great pathos.”

Stories of midwives have been a rarity in British television, Harris  said, and most medical dramas are set in hospitals. That made the community focus of Call the Midwife all the more unique, she said, along with the fact that the series takes religious life seriously. “We show it as it is, rather than make any comment about it,” Harris said.

British viewers were also drawn to the series’ social history aspect, she added. “It was telling a story about England which is relatively recent, and yet the conditions seem a world away from the conditions today,” she said. Women are portrayed giving birth at home, without painkillers, clean sheets or the option of going to the hospital. “There’s an element to the East End in that period that is almost Dickensian.”

While the BBC initially assumed the audience would be fairly old, Harris said, the series drew double the usual number of 16-to-24-year olds on Sunday nights, as families watched together and young people tuned in to see popular comedian Hart, who plays the awkward nurse Chummy.

Overall, the episodes averaged 10 million viewers, and the audience for the final episode in February surged to 11.4 million viewers. The viewership surpassed ratings for the first season of Downton Abbey, making Call the Midwife the most-watched new drama on record for the BBC. The “audience appreciation index,” measuring how a statistically representative panel of viewers reacts in an online survey, of 94 (out of 100) was the highest the BBC had had in years, Harris said. A Christmas special and eight more hours are currently in production.

PBS’s promotional team has created a tune-in campaign aimed at generating a similar audience response in the U.S. Harris  and several actors in the drama appeared during the Television Critics Association summer press tour to publicize the series. PBS is also promoting the show through a paid media campaign that includes spots on local cable and broadcast TV, radio spots, select magazine ads and digital advertising, said spokesperson Carrie Johnson.

Stations are also planning to leverage the broadcast on their own behalf. Some 90 to 100 stations participated in a PBS-led webinar on tactics for using the show for development purposes, Wilson said, and PBS has provided stations with a toolkit for local screenings, as well as on-air promos and clips. Some 20 stations are hosting events, Johnson said. So far the show has not lined up a national corporate sponsor, however.

If PBS likes the early ratings for Call the Midwife, Wilson said, it can buy rights to the second season, creating the possibility that new episodes could run early next year, “if not simultaneous with the UK, shortly thereafter.” That would essentially mean that PBS would have the drama series as a staple for 15 weeks this season.

That would please Masterpiece Executive Producer Rebecca Eaton, who even before Call the Midwife surfaced had already been discussing with PBS the possibility of having British drama as a lead-in. The new show, she said, “has the potential of being a series with legs, which would be great to have, because that’s how people are watching television now, as returning series, witness Downton Abbey.”

“While I don’t know that this is signaling an exclusively ‘drama at 8’ strategy, what it does is build on our intention to have high-caliber programming that will serve as a strong first hour of prime lead-in to Masterpiece,” Wilson said.