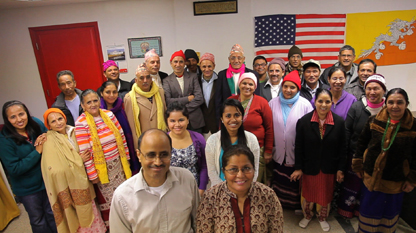 Birendra Dhakal (front, left) teaches a citizenship class at the Bhutanese Spiritual Center in Clarkston, Ga., one of the most diverse communities in America. He's profiled in Maria Hinojosa's America By The Numbers, a PBS election special.

Birendra Dhakal (front, left) teaches a citizenship class at the Bhutanese Spiritual Center in Clarkston, Ga., one of the most diverse communities in America. He’s profiled in Maria Hinojosa’s America By The Numbers, a PBS election special.

Did you hear the one about the refugee from Somalia who wasn’t eligible to vote for President Obama but ran a successful campaign that put a Tea Party candidate on the city council?

How about the story of the black man, harassed by the Ku Klux Klan when he moved to a small Georgia town 40 years ago, who became the town’s first black mayor? Wait, there’s more: His best friend used to go to Klan rallies.

These are two of the stories told by Maria Hinojosa after she took a magnifying lens to Clarkston, Ga., for the PBS election special America By The Numbers. It debuts Sept. 21 as a special presentation of Need to Know, the Friday night public-affairs show from New York’s WNET.

The documentary looks at the demographic shifts found in U.S. Census data, focusing on people whose engagement in community life exemplifies the increased diversity of American civic life. It also brings that diversity to public TV by virtue of Hinojosa’s multiple roles in the production. America By The Numbers is the first primetime pubTV public-affairs show anchored and executive-produced by a Latina.

The special may be developed into a series, Hinojosa said, pending the outcome of discussions with PBS and potential underwriters.

Plans for the show began in 2010, shortly after Hinojosa, anchor of NPR’s weekly Latino USA, formed the Futuro Media Group, a nonprofit production company. Her concept was to tell untold stories, often found in communities rarely visited by other media.

For this first show, PBS asked Hinojosa to produce an election special long before the campaigns got into full swing. “Our problem was how to do an evergreen election-related story,” she said. “It was very difficult, as you can imagine. If, for example, we do a story about Occupy Wall Street, we might find that Occupy Wall Street doesn’t exist at the time the show airs.”

Instead of focusing on a particular group or issue, Hinojosa seized on the idea of taking a closer look at census numbers and, in particular, what they say and don’t say about America today.

“One of the core premises of the show is that there is a new America,” she explained. “So let’s look at the demographic numbers. Who are the new voters and what does this new America look like?”

“As we researched it, we found that the place in the United States that experienced the greatest percentage of change in terms of multicultural diversity is the South. And Clarkston is one of the most diverse towns in the country.”

Hinojosa said much of her reporting involves finding people with incredible stories. She sent a preproduction team to Clarkston, and the town did not disappoint.

When Hinojosa arrived in Clarkston for five days of taping, she was accorded celebrity status. “Everybody knew we were coming to town and, to be very honest with you, that was freaky for me. I don’t usually work that way. But it was a very big deal.”

There were too many fascinating people to squeeze into the half-hour program, she said. Also, on the spur of the moment, Hinojosa invited many of them to a roundtable discussion over breakfast. That wasn’t included in the final program, either.

In the digital age, though, very little gets left on the cutting room floor. “We will definitely put it on the web,” Hinojosa said.