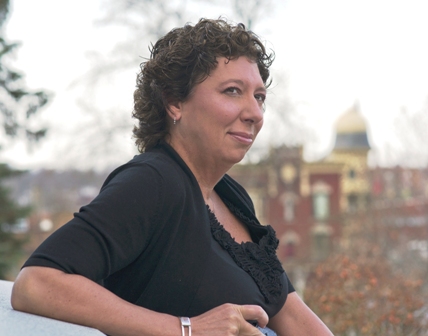 Mary Wilmer, leader of the initiative to bring jobs back to a struggling Wisconsin community in As Goes Janesville. The documentary debuts Oct. 8, leading the news season of PBS's Independent Lens. (Photo: ITVS)

Producers of the documentary As Goes Janesville, an intimate exploration of a small town struggling through hard economic times, found themselves, quite by accident, in the midst of three national news stories during filming.

“This was different from any other film I’ve made, because it became news before it was even released,” said director Brad Lichtenstein of 371 Productions in Milwaukee. “That was tricky to navigate.” The film, premiering Oct. 8 on PBS’s Independent Lens, focuses on Janesville, Wis., after its General Motors assembly plant closed in December 2008.

Mary Wilmer, leader of the initiative to bring jobs back to a struggling Wisconsin community in As Goes Janesville. The documentary debuts Oct. 8, leading the news season of PBS’s Independent Lens. (Photo: ITVS)

During three years of filming, Lichtenstein’s camera captured Republican Gov. Scott Walker quietly telling a campaign donor about his plan to “divide and conquer” Wisconsin’s public labor unions. That clip, part of the film’s trailer, went viral in May and led to what Lichtenstein calls a “maelstrom” of press attention.

Also, a state lawmaker who became a central subject of the film was one of 14 Democrats who fled to Illinois in February 2011 to forestall action on Walker’s anti-labor bill, sparking national press attention. Lichtenstein interviewed the frustrated and exhausted Tim Cullen while he was hiding out and distraught over his state’s future.

Then, just last month, Republican presidential hopeful Mitt Romney selected local Congressman Paul Ryan, a Janesville native, as his running mate. Suddenly, the film’s outtakes of Ryan talking about job retraining, health care and even his family history were of interest to the press and public. Lichtenstein posted a series of outtake clips online.

Through all the attention, Lichtenstein was at times conflicted over the ways that state and national politics intersected with his film. Yet he remained focused on the central subject that he set out to document: how one community adapted to the 2008 collapse of the U.S. economy and the corresponding loss of local manufacturing jobs.

“I was trying to think of a way to address it that would be useful,” Lichtenstein said, referring to the economic hardships that beset the country. “I’m like Thomas the Tank Engine. I like to be useful.” He knew of other filmmakers chronicling the recession, but no one was examining how a community was picking up the pieces and recovering from the financial downturn — “how a typical American town reinvents itself,” he said. He selected his wife’s hometown, Janesville.

Lichtenstein’s filmmaker friends Steven Bognar and Julia Reichert directed HBO’s The Last Truck: Closing of a GM Plant, which chronicled the months leading to the December 2008 shutdown of a factory in Moraine, Ohio. He sees Janesville as a kind of sequel to that film — listening to the reverberations that continue after assembly lines go silent.

The tragedy: Pragmatism is dead

Janesville, population 63,000, rests near the Illinois border in south-central Rock County, Wis. While the city has struggled, it remains proud.

“Lots of people here don’t see ourselves as a downtrodden community,” said Frank Schultz, a reporter with the Janesville Gazette who has covered both the issues in the film as well as the production itself. “One of the empty storefronts in the film had been like that for years before the GM plant left. We’re not as bad as Flint, Michigan,” the Midwestern town made famous by Michael Moore’s 1989 documentary Roger & Me.

Filmmaker Brad Lichtenstein set out to document “how a typical American town reinvents itself.” (Photo: 371 Productions)

In considering principal subjects for his film, Lichtenstein wanted to focus on the challenges of women facing unemployment. “That story of men who lost their jobs — while I’m certainly not diminishing their experiences, I felt like we’d seen that a lot,” he said. “I don’t want to stereotype, but a lot of men struggle with loss of status, while women more often focus on how to maintain their status as primary caregiver to their family.”

Lichtenstein became especially attuned to that during production of his 2006 film, Almost Home, about caregivers and aging residents at a Milwaukee retirement community. The film also ran on Independent Lens.

Establishing relationships with the people of Janesville took time. “If you don’t have that trust and access, you don’t have the story,” said Nicole Docta, co-producer. “Then it’s just me talking for them, instead of them telling their own story.”

Lichtenstein chose characters whose lives reflected the economic challenges and opportunities of Janesville’s citizens. There’s the stoic Cindy Deegan, laid off after 13 years with GM supplier Alcoa, who is considering whether to retrain for a new profession. And former GM worker Gayle Listenbee, a resilient breadwinning wife and mother who weighs a wrenching choice between unemployment and a transfer to Fort Wayne, Ind., that would take her away from home for most of the week. And Mary Wilmer, a local bank president and enthusiastic community booster fighting to attract businesses in a development effort dubbed Rock County 5.0.

At the film’s center is Cullen, a pragmatic lawmaker trying to bridge the contentious and growing division between labor and business interests in the state.

“The great thing about Tim is, he’s truly in the middle,” Lichtenstein said. “From a storytelling point of view, he is the fulcrum.” The documentary doesn’t attempt to determine which of the fractious viewpoints — labor vs. business, Republican vs. Democrat — are right or wrong, “but whether these divisions are justified, and how they ultimately affect the community.”

Cullen “personifies the tragedy of the story, that pragmatism is dead,” Lichtenstein said. “There’s no room for someone just trying to get something done.”

As Gov. Walker’s fight with the public employee unions reflects how these divisions reveal themselves in state and national politics, the turmoil experienced by the film’s subjects illuminates how issues at the heart of the conflict affect day-to-day life. Deegan discovers a lump in her breast in the waning days of her health-insurance coverage; Listenbee quietly recites bedtime prayers with her tearful daughter on the phone from her new job hundreds of miles away. Wilmer works to bring a new company with 125 jobs to the Janesville area, but Shine Medical Technology, a start-up, seeks a $9 million incentive package from the City Council.

In January 2011, Lichtenstein was filming an appearance by Gov. Walker, who had come to town to help woo the med-tech company. Before Walker’s speech, Diane Hendricks, a Rock County 5.0 supporter and contributor to Walker’s political campaign, pulled the governor aside to ask quietly whether Wisconsin would ever be a right-to-work state, a change that would make it much easier to attract new businesses. Lichtenstein’s camera was rolling.

“Well, we’re going to start in a couple weeks with our budget-adjustment bill,” Walker replies. “The first step is, we’re going to deal with collective bargaining for all public employee unions, because you use divide and conquer.”

That clip is part of the film’s trailer posted this May, as Walker was fighting for his job in a June 5 recall election sparked by his anti-union stance. The timing of the clip’s posting had nothing to do with the recall vote, Lichtenstein said. “We were actually scheduled to post the trailer earlier, but wanted to make sure we crossed our T’s legally” before presenting it.

After the trailer went up May 10, Lichtenstein spent the next two weeks answering media calls. The film’s website lists 20 of the stories generated by news outlets such as The Associated Press, MSNBC, the Washington Post, Forbes magazine, the Huffington Post and the International Business Times. During one four-hour stretch, the trailer received 200,000 hits.

Becoming part of the news

The battle over Gov. Walker’s budget-adjustment bill, and the recall election that followed, created a conundrum for Lichtenstein: He was focused on one city where the economic challenges that politicians were responding to affected people in heart-wrenching ways, yet the divisive stand-off in Wisconsin had become a major national news story.

Walker’s bill, which included the attempt to end collective bargaining for all public labor unions, threw the traditionally worker-friendly state into chaos. In February 2011, tens of thousands of screaming protesters blanketed the state capitol grounds and crammed into the building in Madison. To prevent a quorum of 20 legislators necessary for a vote, 14 Democratic lawmakers, including Cullen, fled the state.

The story was so big that President Obama even weighed in, saying Walker’s proposal seemed like “an assault on unions.”

“Tim called on his way to Illinois,” Lichtenstein said. “He told me what was going on and gave me permission to film him. I was at a coffee shop. My first reaction was not, ‘I’ll be there.’ I said, ‘Give me a few minutes to think about it.’ ”

The director’s concern was how the high-profile state political conflict fit into his community-minded film about Janesville.

Lichtenstein did end up filming Cullen on the lam. He also shot a segment at the capitol, where protesters included Gayle Listenbee and her daughter.

In editing the film, Lichtenstein decided not to use his footage of Rep. Paul Ryan, who, as chair of the House Budget Committee, has been a key figure in the national debate over government spending. Even though Ryan maintains a constituent-services office in his hometown and participated in filming, the material wasn’t sufficiently relevant to what was happening in Janesville. During nine hours of interviews with Ryan, “he’s saying stuff he’s said a million times before,” Lichtenstein said. “Ultimately, I don’t think that’s contributing anything revelatory to understanding Janesville.”

But when Ryan joined the GOP ticket, the director realized that the clips were newsworthy and relevant to the presidential race. He prepared 19 interview clips and posted them on 371 Productions’ Vimeo page.

Unlike the clip of Gov. Walker talking up his political strategy, the Ryan videos didn’t go viral, with most receiving fewer than 300 views.

Lichtenstein believes he stayed true to his vision for the film: to highlight how people from different backgrounds and circumstances cope with job loss and to encourage citizens in different economic circumstances to work together to improve their communities. He sees outreach as an important way to advance the latter goal.

Inspiration to develop the app, dubbed bizVizz, stemmed from Rock County 5.0’s effort to bring Shine Medical Technologies to Janesville. The app will allow citizens to use smartphones to snap a photo of a corporate logo or product and receive information such as tax data, campaign contributions and public tax-subsidy information. The app’s release date is planned for early next year, Chheda said.

One thought on “Film captures a city in turmoil, recovery”