WGBH’s acquisition of Public Radio International, announced July 26, positions the station and network to step up their longtime collaboration as co-producers at a time when PRI is seeking a stronger position in public media. 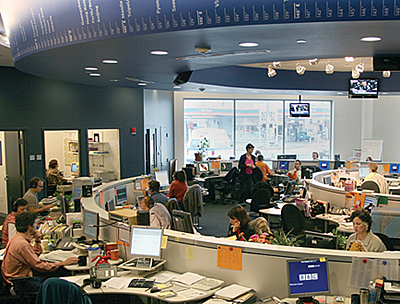 Before WGBH and PRI got married, the Boston station got to know the network as a partner in the daily pubradio news program, The World, based in this newsroom at the station.

Their partnership gives WGBH a pipeline to distribute more radio programming to stations, while granting PRI access to the Boston station’s considerable resources in multimedia production.

Under the agreement, PRI will remain operationally independent of WGBH. It will retain its own board of directors, keep its headquarters in Minneapolis and be responsible for raising its own revenue.

But as they move forward, the partners will build on a relationship forged as co-producers of the news programs PRI’s The World and The Takeaway. The overarching objective is to expand PRI’s portfolio of program offerings and elevate WGBH’s profile in public radio to a national stage.

PRI embarks on the partnership after several years of declining revenue. In fiscal year 2010 it ran an operating deficit of $335,000, which deepened to $2 million the following year, according to PRI spokesperson Julia Yager.

Yet PRI and WGBH’s leaders say the acquisition stemmed from a shared strategy for growth, not from a need to shore up PRI. Both declined to discuss whether money is changing hands in the deal.

The partnership started to come together about a year ago, as PRI’s board of directors considered a future in which the network would face increasing competition and potentially tighter funding. The network lost some footing in 2004, when Minnesota Public Radio established its own distribution arm, American Public Media, and removed programs such as Marketplace and A Prairie Home Companion from PRI distribution. PRI also lost the BBC World Service to APM this year.

The PRI board set a goal to double the network’s impact on public media, and to do so fairly quickly, says President Alisa Miller. “It became clear to us that a strategic partnership with a larger partner could put us in a strong position,” she says.

WGBH was an obvious potential partner due to its collaboration with PRI on producing PRI’s The World since 1996. Over time the management teams at PRI and WGBH had cultivated a “great deal of respect” for each other, says Jon Abbott, WGBH’s president.

“In the end, a conversation about accomplishing more by working more closely together was quite organic,” Abbott says. The two parties began hammering out the specifics of their partnership within the past few months, he says.

“From a board perspective, we think this is the exact right partnership at the right time,” says Stewart Vanderwilt, g.m. of KUT in Austin and a PRI board member. The partnership will help PRI and WGBH become more dynamic by drawing on each other’s strengths, he says. “Strategic collaborations like this are in many ways the future.”

Through its increased collaboration with PRI, WGBH “will learn more about the opportunities and needs of public radio stations and what they’re doing in broadcast and digital,” Abbott says. The station’s national radio productions are now limited to its two shows with PRI. But within its own market of Boston, WGBH stepped up radio production with a 2009 signal expansion that allowed it to move classical programming to a new frequency and expand the news service on its legacy signal.

For PRI, the partnership presents an opportunity to create more multiplatform content for its affiliate stations. As an example of the projects PRI aspires to produce, Miller cites its recent State Integrity Investigation project. The network joined with about two dozen stations across the country to assess safeguards against corruption within state governments.

PRI will draw on its experiences with that project as it embarks on a new initiative, Immigrant Lives. Announced July 25, Immigrant Lives will draw on a $400,000 grant from the Rita Allen Foundation to produce stories for PRI’s The World about immigrants in the U.S. PRI is working on the project with New America Media, an umbrella group for ethnic-news organizations across the country.

Under the partnership with WGBH, the station will assume some administrative functions for PRI, which will reduce costs for the network. Leaders at both organizations have yet to determine how staffing will be affected but expect no sweeping changes.

PRI needs to expand its program portfolio “if they’re going to stay an affiliate choice for stations,” says Torey Malatia, c.e.o. of WBEZ in Chicago, whose This American Life is distributed by PRI.

With funding scarce, smaller stations in particular may find that they’re less able to afford three separate affiliation fees for PRI, APM and NPR, and may start making tough decisions about which to drop. “It would be a really good time for the PRI portfolio to fatten up a bit so that they have some attractive choices,” Malatia says.

The relationship with WGBH could also benefit PRI and stations as a whole, he says. “WGBH is a very creative producing organization,” Malatia says. “They certainly know how to read audiences well.”

If WGBH can use its combined resources with PRI “to become anywhere near the kind of creator in radio that they have been for television, that would be a positive thing for public radio,” says Dale Spear, a former PRI exec and now director of content and programming at WFAE in Charlotte, N.C.