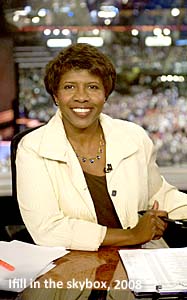 With the NewsHour’s Gwen Ifill and Judy Woodruff stepping into co-anchor roles for PBS’s coverage of the Republican National Convention in Tampa, producers have reconfigured their set and editorial plans for the 18  hours of live broadcasts that begin airing on PBS stations on Tuesday.

Like the Republican convention, the primetime specials will kick off later than planned; GOP officials postponed the convention’s start until Tuesday to limit disruption from Tropical Storm Isaac.

The coverage, airing at 8 p.m. ET through Thursday on most PBS stations, marks the passing of the torch from Jim Lehrer, NewsHour cofounder and executive editor, who retired as anchor last year. As Ifill and Woodruff share the role of helming the broadcast, they’ll make broadcasting history as the first pair of female journalists to co-anchor coverage of the major party conventions.

“It’s not affecting the way we cover the convention,” said Linda Winslow, NewsHour executive producer (and the first woman to have the job), referring to the broadcasting milestone, “but it is helping us get publicity.”With two co-anchors in the mix, producers have adjusted their plans for interview and analysis segments to be produced from the NewsHour’s skybox above the convention floor.

For past conventions, Lehrer and political analysts David Brooks and Mark Shields sat together to discuss convention highlights, and a second set was used for guest interviews. “This time we have one big skybox with Judy and Gwen seated beside each other, and Mark and David on the wing,” Winslow said. “In that same space, we built a smaller set where one of them can get up and talk to somebody one-on-one or one-on-two.”

“It’s going to make it a different kind of rhythm for the whole show,” she said.

Senior Correspondent Jeffrey Brown will report from the RNC convention floor in Tampa; Ray Suarez will have floor duties for the Democratic National Convention in Charlotte, N.C., Sept. 4–6. Business correspondent Paul Solman will produce field reports on the local economies of Tampa and Charlotte. And the NewsHour will count on contributions from Hari Sreenivasan, who joined the program in late 2009 as an online/on-air correspondent. NewsHour regulars bringing their expertise to the coverage are presidential historians Richard Norton Smith and Michael Beschloss, and political pollster Andy Kohut of the Pew Research Center.

Uninterrupted coverage of speakers and other happenings from the convention floor will be the focus of the NewsHour’s nightly broadcasts. Winslow wants PBS viewers to feel as if they are seated among the Republican delegates in Tampa and the Democrats in Charlotte. [PBS releases on Republican and Democratic national convention coverage.]

The approach contrasts with the broadcast networks’ boiled-down convention coverage — each is producing one-hour nightly specials — and the cable news networks’ focus on partisan sparring.

“We consider it our mission to primarily cover what the two parties are doing,” Winslow said. “It’s not about us. It’s about the parties and their messages and introducing our viewers to the people they choose to highlight.”

NewsHour commentary and analysis segments won’t disrupt major speeches from the convention floor, but will run between them.

For political junkies who want more analysis, they’ll find it online, according to Christina Bellantoni, NewsHour political editor. Several recurring segments will be produced and webcast each day from the NewsHour’s 24-hour live stream of events from the convention stage:

Aided by a CPB grant of $420,000, PBS will extend its partnership with Mozilla and the Participatory Culture Foundation to produce crowdsourced translations of convention speeches into multiple languages. Mitt Romney’s selection of Paul Ryan as his planned running mate is available in Ukrainian, Tagalog and 15 other tongues. Video of the translated speeches will be posted on online at bit.ly/NewsHourTranslation along with a selection of other NewsHour campaign and convention coverage that has been translated. The grant also covers the costs of closed-captioning the online content.

[Lehrer, who has moderated 11 presidential and v.p. debates so far in his career, has not been idle on the campaign beat. He has updated his 2011 Random House book, Tension City: Inside the Presidential Debates, for paperback release  Sept. 25. Then on Oct. 3, he’ll moderate the first presidential debate Oct. 3. ]

An earlier version of this article incorrectly reported that Lehrer retired as host and executive editor of the NewsHour;  he stepped down as the lead news anchor but continues to be involved as executive editor. Also, Gwen Ifill won’t moderate the 2012 Vice Presidential debate as reported; the Commission on Presidential Debates tapped Martha Raddatz of ABC News for the v.p. face-off.
ShareTweet EmailPrint More