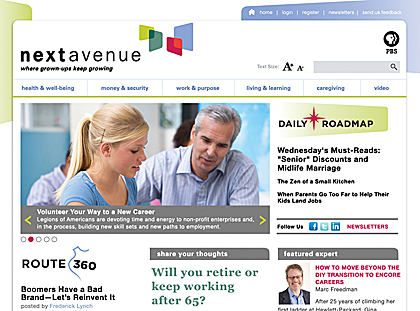 The run-up to this week’s launch of NextAvenue. org has taken longer than the entire lifetimes of some Silicon Valley dot-coms, leaving plenty of time for plans to change.

Jim Pagliarini, president of Twin Cities Public Television, and Judy Diaz, president of TPT’s Next Avenue, had their first exploratory meeting with the National Institute on Aging four years ago.

“It would have been wonderful to launch with some television,” Pagliarini said, but “some of that has fallen away because of the economic difficulties the system is facing.” Next Avenue ratcheted up its ambition as an online magazine in August with the hiring of veteran editor Donna Sapolin as v.p. and editorial director, Pagliarini says.

He and Diaz had planned for Next Avenue to aggregate the best pertinent material available from a list of cooperating public and nonprofit agencies, such as the National Institutes of Health and the Family Caregiver Alliance. Instead, Sapolin and her staff will write and commission more new articles for the target audience.

Sapolin, a specialist in lifestyle magazine publishing, has lined up dozens of contributors, including columnists, shrinks, a yoga leader, career coaches, Chris Farrell of pubradio’s Marketplace Money, at least one rabbi and a scattering of PBS pledge-special stars.

Though online text will be Next Avenue’s major medium, the site is counting on public TV partners to set it ahead of other web startups aspiring to become destination sites. So far, 73 of the 170-some public TV licensees have agreed to affiliate with the project, creating cobranded local versions of the site, contributing some of their local content, providing regular doses of on-air promotion to bolster a reputational link with public TV.

Participating stations pledge to air four Next Avenue promo spots a week, run four print ads a year and write at least four local articles a year for Next Avenue.

Some of the system’s biggest stations are not yet listed as affiliates, including WNET in New York, PBS SoCal in Los Angeles and WHYY in Philadelphia, but Diaz is developing an alternative “super-affiliate” deal for stations that want more website space for their larger volume of pertinent productions. Pagliarini says Boston’s WGBH “may even be with us on launch.”

Next Avenue will offer selected episodes of PBS programs, streamed through PBS’s COVE video player. The site also will stream episodes and segments from TPT’s national talk show Life (Part 2) and a string of TPT’s other aging-related productions that inspired Pagliarini and Diaz to develop the new web service. National producers and American Public Television will make other programs available for online streaming through Next Avenue’s own servers and video player.

At launch this week, Next Avenue will have some 500 videos on call for streaming on its site, Sapolin predicts. “You could call this a video channel for the 50-plus crowd.” “It’s in the cards to do TV production, for sure,” Sapolin says, “but not in this phase.” The site’s predominant medium will be text, optimized for users to find it through search engines. Next Avenue’s goal is to reach its 1-millionth unique visitor in the first year, according to Diaz.

While Sapolin expects Next Avenue to attract its first-time users through web searches, on-air promotion and social media, she wants them to hang around and come back because they’ve discovered a comprehensive source about the interrelated problems and opportunities, health and financial issues, satisfactions and losses that come with their stage of life.

The editor assembled a freelance pool of dozens of writers — well-known, lessknown and unknown names, including some expected to build followings. The Stanford Center on Longevity just approved a partnership to provide articles based on its research. And Sapolin is talking about sharing content with other media producers, such as AOL and the PBS NewsHour. “We all need to drive traffic back and forth to one another, and to supplement areas of content that we cannot afford to create ourselves.”

It’s not Sapolin’s first publishing job associated with public TV. She was editor-in-chief at This Old House magazine for WGBH and Time-Life a decade ago, served as editorial director of Women’s Day special interest publications and until recently was editor-at-large of the multimedia web magazine FLYP. As in her old job with This Old House, she’ll stay in touch electronically with her TV colleagues while maintaining her base in New York. She spent her first six months at TPT in St. Paul and expects to come back for monthly meetings. Also working in New York: Managing Editor Larry Carlat, who ran web operations for Rolling Stone and wrote for Esquire and other slick monthlies. The project’s whole staff, indeed, is spread among several cities, including the Washington, D.C., area, where Diaz lives.

Next Avenue’s connection with broadcasting could also help to boost the bottom line by giving Next Avenue stronger advertising revenues than a web-only project could expect.

Given the web’s low ad rates, Next Avenue’s website couldn’t sustain itself on online ads alone. Diaz expects to earn higher revenue by assembling sponsorship packages that combine underwriting placements on cooperating pubTV programs with web sponsorships on Next Avenue. She’s talking with the producers of History Detectives, America’s Test Kitchen and other national shows.

Sponsorship money is still a thing of the future, however. Diaz expects to ink the first ad deal soon after launch, followed by two or three more in the first year or two. To develop the project and get it off the ground, TPT raised some $6 million, mostly from foundations — notably the initial funder, Dublin-based Atlantic Philanthropies — and some from the station’s own funds.

“I want to give Judy and Donna a two-year runway,” Pagliarini says. “We have enough in the bank to get through most of two years.” In one obvious respect, Next Avenue doesn’t stray very far from PBS’s strength.

Next Avenue’s 55-plus target audience is already the largest slice of public TV’s primetime viewership, and PBS has occasionally distributed programs that directly addressed them with specials and talk shows, such as Over Easy from KQED (1977–82) and TPT’s Life (Part 2), which ran for more than 30 episodes starting in 2007.

But unlike PBS, Next Avenue isn’t delivering a general-interest service with especially strong appeal for fully grown-up viewers. It’s planned explicitly to answer their questions about the stage of life they, or their parents, are living.

Diaz says she has already checked out Next Avenue in her own role as a caregiver for her 84-year-old father in Milwaukee, who recently had a couple of falls but wants to continue living at home. She went online and found information about “universal design” — the ideal of planning a home that can accommodate its people through all stages of life.

With the new web service, TPT is bidding to serve a community that is both bigger and narrower than its hometowns of Minneapolis and St. Paul — a coast-to-coast demographic community based on shared interests, rather than the shared geography of a traditional broadcast audience.

Some public stations have been doing this for years, of course. PBS series producers such as WNET’s high-culture mavens have always served specialized audiences beyond their hometowns. For the past 10 years, local pubradio stations have staked virtually international claims on musical territories with Internet audio streams such as Folk Alley from Kent State’s WKSU. Networks recently have started online-only services such as PBS Arts and NPR Music. And NPR’s Project Argo has helped a dozen member stations develop “vertical” blogs on such subjects as healthcare and Mexican border issues — potential footholds for establishing topical web followings across the continent and beyond.

“Almost any station can find a content strategy beyond your geographic location,” Pagliarini told Current. “Every station could theoretically become a national producer of content in the web space.”

Life (Part 2): For a key audience, a candid talk show, then something more, June 2007. In two seasons, TPT produced 33 episodes. The station later did three seasons of Getting There, a 19-episode local series for 50-plus viewers; and Honoring Choices Minnesota, an ongoing seven-part local series of conversations on planning for end-of-life care.

Next Avenue will use Web to super-serve a (slightly) younger audience, October 2010.

From public TV, a new site for 50-somethings — Next Avenue, says today’s story in the New York Times.