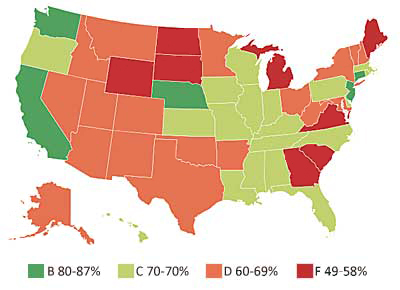 The results of an accountability journalism project, released this morning by Public Radio International and two nonprofit news partners, pairs a data-rich website with public radio news coverage to report on the strength of state governments’ anti-corruption safeguards.

It aims to catalog the 50 state governments’ vulnerabilities to corruption, providing a tool for citizens and news organizations acting as watchdogs and advocates for stronger laws and enforcement, according to pubradio news veteran Michael Skoler, v.p. of interactive media for PRI.

The analysis turned up surprising results. New Jersey, a state often caricatured as a hotbed of mob activity, has the lowest risk of corruption. Georgia has the highest.

The project, launched by the Center for Public Integrity. Global Integrity and PRI, hired a journalist in each state and adapted the findings for special news coverage that began airing this morning on 16 public radio stations.

The journalist assigned to each state compiled answers to 330 questions about how the state handles transparency and accountability in 14 areas such as access to information, lobbying disclosure, ethics enforcement, pension-fund management and redistricting. Reporters also looked for gaps between laws and enforcement. Their findings were the basis for the data analysis that produced the report card, allowing comparisons among states.

New Jersey isn’t the only state with a reputation for corruption that had developed extensive safeguards to hold back human nature, according to Caitlin Ginley, manager of the Washington, D.C.-based State Integrity Investigation. Illinois and Louisiana, two states with histories of government scandal, earned respectable rankings.

“At first, this seems counter-intuitive, but then you look at what the state has actually done — taken reform seriously, passed strong ethics laws — it makes sense for them to come in at a higher rank than some other states, where the legal structure and framework for accountability and transparency just isn’t there,” Ginley said.

The top five most transparent and accountable states are: New Jersey (with a grade of B+), Connecticut (B), Washington, (B-), California (B-) and Nebraska (B-). Nineteen states got a C and 18 received a D.

“No state earned an A, so to be at the top of the list is to win a beauty pageant where everyone is not so pretty to start with,” said Nathaniel Heller of Global Integrity, a nonprofit that has researched comparable legal safeguards at the national level in other countries.  Like Ginley, Heller believes that states that have been rocked by corruption scandals tend to have tough deterrent laws that are enforced.

The grades don’t indicate the level of actual corruption in state government. “One of our biggest challenges is to help people understand that we are trying to measure the risk of corruption because of existing laws and practices,” Skoler said. “That doesn’t equal what state is most corrupt.”

In conjunction with the report card’s release, a score of public radio stations will be reporting on their states’ results for special news coverage to be delivered via broadcast and online platforms.

Dave Davies of Philadelphia’s WHYY produced a feature on the findings for three states — Pennsylvania (which received a C-), Delaware (C-) and New Jersey (B+). It will run on WHYY’s half-hour evening newsmagazine, Newsworks Tonight.

As PRI had hoped, stations are taking the data and running with it. WGBH in Boston is conducting an online survey asking listeners to grade Massachusetts. WVXU in Cincinnati broke away from NPR’s Morning Edition at 9:20 a.m. to broadcast a 30-minute interview with the reporters who researched Ohio (grade D) and Kentucky (C). KCUR in Kansas City, Mo., produced a five-and-a-half minute feature on the C grades earned by both Missouri and Kansas  and will air it three times during Morning Edition.

“Hopefully, this project will help the stations serve the audience with a subject that has a lot of interest,” said Adam Hochberg, who assisted public radio stations in developing coverage. “In a lot of states, public radio is one of the few outlets that still covers state government news.”

To ensure that the investigation’s findings reach a broad news audience beyond pubradio’s listenership, the project retained Aly Colón, a former diversity director at the Poynter Institute, to share the analysis with ethnic media and minority journalism associations such as the National Association of Black Journalists.

Participating pubcasters include networks that cover entire states large and small, such as New Hampshire Public Radio and Oregon Public Broadcasting, and big-city stations WAMU in Washington, KPCC in Los Angeles, WBUR and WGBH in Boston and WNYC in New York, according to Hochberg.

In signing on, each pubradio outlet agreed to report six stories and a talk-show segment over the next five months and to participate in the project’s social-media streams on Twitter, Facebook and other digital platforms.

“We thought it was a great idea with a lot of potential for deep reporting,” said Emily Donohue, news director at KUT in Austin, Texas. She assigned reporter Ben Philpott to develop news coverage from the investigative findings that veteran Texas journalist Kelley Shannon had produced for the project.

Three weeks ago, Philpott began diving into the research — more than 300 data points that added up to a cumulative grade of D+ for Texas — and developing coverage in collaboration with Shannon, who wrote a narrative to accompany the data.

KUT’s coverage goes beyond the surface of Texas’s rating, Philpott said, to explain how the state fell short on the integrity index.

Texas anti-corruption measures are comparatively strong, earning a B, but the government often failed on implementation. “Laws were passed, but why aren’t they being enforced? Or why are they not effective? That’s what we’ll look into,” Philpott said.

He was surprised by some data.  Texas got an F in state civil-service management, the category measuring oversight of state employees. “We got a horrible score — 48,” he said. Measures to protect whistleblowers from consequences of going public also scored badly, but the state received an A for internal auditing.

“We’ve already gotten seven or eight story ideas,” said Philpott. “We are now trying to figure out creative ways to do this. We don’t just want to regurgitate data.”

The integrity project’s leaders also plan to extend their work beyond simple grades of the states.

“We didn’t want to just rank and grade the states,” Skoler said. “We wanted to create a community that would continue to watch over and fight for state integrity. These report cards provide a map to local journalists and citizens as to where they should be looking at issues that hurt government. Now that the report cards are being released, we are encouraging citizens to look at them, discuss them and email their legislators, which we have made very easy.”

The project is unusual for a news investigation, Skoler said, because it’s been structured with the goal of total transparency.

“Anyone will be able to drill down and see every corruption risk indicator . . . in our state integrity index, the criteria the reporters used, notes from the reporters, references and sources they used — and if the independent reviewer had comments, you will see those comments,” he said.

The Omidyar Network and the Rita Allen Foundation contributed $1.5 million for the project. Additional support came from the Rockefeller Family Fund.

The investigation looked at dozens of details of state law and enforcement, including these categories:

Access to information: What information is legally accessible in each state, and how easily can citizens get it?

Campaign finance: The financing of electoral campaigns at the federal, state and local levels.

Executive accountability: Guidelines, laws, and procedures to ensure that governors and cabinet-level officials can be held accountable for their actions.

Legislative accountability: Laws, policies, and procedures to ensure that lawmakers – who often work part-time and hold outside positions – best serve their constituencies and not their own personal political interests.

Judicial accountability: How accountable and transparent are judicial officials and their staffs?

State budgeting: Is the state budget process open to the public or conducted behind closed doors?

Civil service management: State hiring and firing regulations, nepotism and cronyism rules, whistleblower protections, and other guidelines designed to ensure a competitive, safe, and professional work environment for its employees.

Procurement: State laws governing the purchase of goods and services.

Lobbying disclosure: Laws and practices that define what lobbyists can do as they attempt to influence government actions.

Pension fund management: Most states provide a defined pension plan that promises state workers a specific annual payment once they retire from service. Each state with a pension fund has policies governing state contributions.

Ethics enforcement: Forty-one states require external oversight of their procedures through an Ethics Commission. An Ethics Commission is a committee tasked with validating the ethical grounds of the state government’s decisions.

Insurance commissions: States regulate the insurance industry to protect consumers. Regulatory structures vary – the state may appoint a commission or elect a single commissioner, for example – but the overall mandate remains the same.

“Fifty states and no winners,” the project’s overview story.

State Integrity project, its reporting team, and its blog.