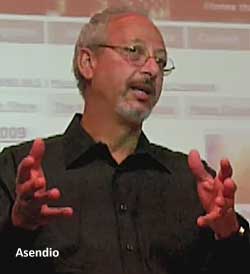 Radio news veteran Jim Asendio resigned as news director of Washington’s WAMU-FM last week after an internal dispute over a private fundraising event turned into a public clash over the editorial firewall protecting the station’s newsroom.

Asendio objected when top managers required him and two reporters from his staff to participate in a “Meet the Producers” breakfast and panel discussion that the station hosted for major donors Feb. 22.

The choice was stark, the news director said: “I could either not show up and be in trouble, or show up and violate my ethics, so I tendered my resignation.”

The showdown, first reported by Washington Post media critic Erik Wemple, put a spotlight on one of the touchiest subjects in cash-strapped newsrooms — firewalls designed to protect working journalists from undue influence by funders and to prevent appearances that such conflicts exist.

Similar conflicts are playing out behind the scenes at public radio stations across the country, according to Iowa Public Radio’s Jonathan Ahl, who is president of Public Radio News Directors Inc.

“Some of our members have given us the indication that people aren’t necessarily crossing the firewall, but they’re walking up to it and peeking over it” too often, Ahl said. Unwanted influence can come from corporate underwriters as well as major donors, he said.

The PRNDI Board has heard so many complaints about firewall issues that it will devote a session to the topic during its annual conference in June, Ahl said.

Pubcasting leaders have been working on several fronts to clarify and reinforce editorial standards throughout the field.

The code doesn’t advocate or oppose a funder firewall, and it generally supports open discussion of editorial standards with donors or other community members. But it discourages various kinds of improper influence on reporting.

“The key principle is … that our organizations should assure donors understand that there is a boundary between the fact of their support (and our gratitude for it) and our editorial process,” wrote SRG’s Tom Thomas, project co-director, in an email. “As is the case with many of the principles in the Code, how this plays out in practical terms will vary from organization to organization.”

The dispute over WAMU’s editorial firewall was triggered by management’s plan to include reporters in a special event for major donors. As the top news manager, Asendio strictly limited direct contact between his journalists and funders but made himself available whenever a development staffer requested a private meeting or station tour with a donor or corporate sponsor.

“Major-giving people love me because I make myself available to do a dog-and- pony show,” he said. Reporters were a different matter.

“I maintain a strict firewall between the working journalists in the newsroom and the funders who fund the station,” Asendio said. “It’s my responsibility to keep them separate.” Donor-only events involving reporters are especially problematic, he said. “Journalists should not participate in those events.”

A veteran of CBS Radio who has led WAMU’s newsroom through a major expansion since 2006, Asendio had become increasingly uncomfortable with pubradio efforts to reel in big gifts by introducing prospective donors to journalists, he told Current. He recalled a recent meeting with development staff from NPR and WAMU in which he was told: “Major donors expect access.”

“I said, ‘I don’t do that. They can have access to me, but not my reporters. I’d rather not have the money.’”

The news director challenged Program Director Mark McDonald about the “Meet the Producers” meeting and later took his objections to General Manager Caryn Mathes, who gave him an ultimatum. “She said that by not participating in a major station event I would be making a ‘permanent and irreversible statement about whether I was part of her management team,’” Asendio recalled.

“I was not going to put myself in a situation where I was not considered part of the team and my loyalty was being questioned,” Asendio said. “When it comes to having my working journalists involved, I don’t violate that firewall.”

WAMU officials declined interview requests but issued a statement addressing some of the editorial firewall principles that Asendio cited. (Disclosure: Current is published by the School of Communication at American University. WAMU is a separate arm of the university.)

The donor meeting had been structured to avoid one-on-one contact between reporters and donors, WAMU said. With McDonald as moderator, nine reporters and producers participated in the panel discussion about the process of producing news reports and talk programming.

“Allowing people to see the impact that their investment makes in our work is completely appropriate,” WAMU management said. “However, the station does not permit crossing the line between a funder seeing that impact and a funder being allowed input into the planning process for coverage.”

In a Feb. 22 follow-up about Asendio’s resignation, the Post’s Wemple wrote that WAMU’s statement had the “ring of reason” and suggested that Asendio may have overreacted to the donor meeting.

“Holding a panel discussion exclusively for donors to discuss the station’s mission and approach to the news — that seems like a fair way to keep your funders feeling appreciated while at the same time preventing the corruption of your news product,” Wemple wrote. “A bona fide breach of Asendio’s firewall takes place when donors exert pressure on the newsroom’s story choices and execution.”

Commenting from Iowa, Ahl was more circumspect. “In this specific case, it’s very difficult to know whether there was an ethical breach, because there are a lot of specifics that we don’t know,” he said. It’s not unreasonable to require working journalists to attend a donor event, he said, but ethical considerations come down to how the meeting was pitched to the funders who attended and whether they had the opportunity to share their ideas or reactions to editorial decisions in one-on-one situations.

“Was the event open to all donors or only for people targeted for major gifts?” Ahl asked. “Intent has a lot to do with this.”

Elsewhere within American University, the School of Communication’s expert on journalistic ethics, Associate Professor John Watson, regarded the donor breakfast as the former news director did. “If Asendio’s resignation was based on his insistence that directing reporters to attend the meeting was an unethical thing to do, he’s absolutely, unequivocally right,” Watson said.

Watson pointed to an earlier ethics guide for pubradio journalism, Independence and Integrity II, published in 2004 after he attended a discussion among pubradio journalists and ethics experts at the Poynter Institute in Florida. The guide, available on CPB’s website, calls for producers, networks and stations to maintain a firewall between funders and journalists, and specifies that “journalists should not be prevailed upon to engage with funders.”

“Unreasonable pressures on journalists create the appearance and the reality of editorial compromise,” the report said.

“How much wiggle room is there in that?” Watson said. The basic facts of the reporters participating in the donor breakfast create the appearance of an editorial conflict, Watson said. “Integrity doesn’t necessarily relate to the reality, it relates to the appearance, and it seems so clearly the wrong thing to do.”

Thanks to Joseph Liu for the photo of Jim Asendio. Published with permission.

For success in underwriting sales, a business mentality helps, 2007.

NPR Ethics Handbook. Scroll down to “Interacting with funders.”