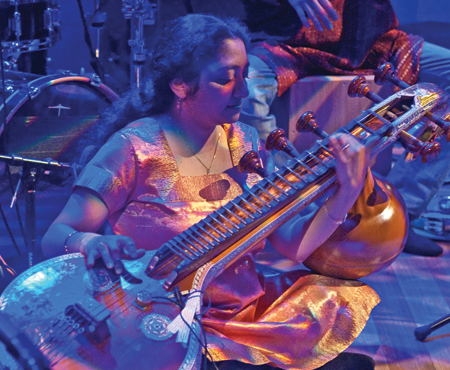 For a host of reasons, WNYC and WQXR regularly ask listeners to be their guests, in person. Above: Charanams, a band from Queens that won WNYC's 2011 Battle of the Boroughs (video).

For a host of reasons, WNYC and WQXR regularly ask listeners to be their guests, in person. Above: Charanams, a band from Queens that won WNYC’s 2011 Battle of the Boroughs (video).

At a time when many radio programmers are experimenting with Internet-based media, it may seem unusual for a station to take on producing content for listeners to “hear it here” — here within its own walls of bricks and mortar.

Yet stations across the nation are doing just that in live-event spaces that come in a range of shapes and sizes, fostering face-to-face interaction with their audiences.

Their goals: to create and innovate content for multiple platforms, to amplify their stations’ brands, to deepen their conversations with current audiences, and to engage new audiences.

I have spent the last five years focused on what a live-event space could mean to a radio station in the 21st century — how to honor the past of this great 20th-century invention, while inviting in new voices and points of view.

Here at WNYC and WQXR in New York, the sandbox of experimentation is The Jerome L. Greene Performance Space — a.k.a. The Greene Space or thegreenespace.org. The Greene Space grew out of a conversation that began long before I was involved, but it’s a conversation I want to extend to colleagues who may want to offer more live events, or are already learning the pros and cons of this additional way of telling stories that matter.

Case study, April 2009 to the present

From Varick Street in Manhattan, you can peer into WNYC/ WQXR’s events space, where Radiolab hosts revel in insect parasitism.

The Greene Space is a state-of-the-art, multimedia, multipurpose performance space and broadcast studio on the ground floor of our Lower Manhattan home. The room accommodates 130 seated participants or 200 standing. It occupies about 3,000 square feet, about the same floor space of a neighborhood McDonald’s. Transparent, wall-size, street-level windows give passersby a clear view of the activity inside. For some events, we use exterior speakers to take music and dialogue to the street.

The venue is fully outfitted with cutting-edge digital audio and multiple robotic high-definition video cameras and equipped for live video webcasting as well as postproduction for podcasts or broadcasts.

When the space opened in April 2009, our company consisted exclusively of WNYC AM and FM. Since then, we’ve expanded to include WQXR, New York City’s all-classical music station, and New Jersey Public Radio, a network of four stations serving northern and central New Jersey. Our corporate name is now New York Public Radio.

WNYC’s five-year strategic plan was initiated in 2005 and supported by a $62.9 million capital campaign. It specifically provided for a new publicly accessible home and investments in new radio and community programming and infrastructure. CPB generously funded the community-based programming as a model for community engagement.

The Greene Space embodies NYPR’s mission “to make the mind more curious, the heart more open, and the spirit more joyful” by dealing with public affairs and news topics as well as by presenting cultural and music programs that speak to the interests and needs of our audience.

We invite listeners into the process of radio-making while figuring out what radio means to diverse communities. Using the space catalyzes NYPR’s shift from a radio station to a media company. It lets us try out content on multiple platforms as part of our everyday practices.

What’s needed to be “multiplatform?”

Does a public radio station need a live space in its own real estate? Not necessarily. Launching a live-event series has little to do with owning your own event space.

Our highly successful annual Martin Luther King Day event is presented in the community, at one of our partner venues, the Brooklyn Museum. Further afield, Radiolab just launched a multicity tour that presents the show to audiences far beyond the limits of New York City.

Live events, for us, have less to do with real estate and more to do with establishing “who we are” — putting down roots in our community.

The physical venue is a tool that helps us build deep reciprocal partnerships with cultural and community groups who can build on our community-engagement efforts.

We launched intimate, live experiences with the spirit of our radio programming. The Greene Space presents and produces live radio and video broadcasts and tapings of WNYC and WQXR’s signature radio programs in front of a live audience, including The Brian Lehrer Show, The Leonard Lopate Show, Soundcheck, Radiolab, Studio 360, On the Media, The Takeawayand WQXR Intimate Performances and festivals.

In these live events, we witness moments that could not have occurred in a traditional radio studio.

For a live radio broadcast and video webcast of The Brian Lehrer Show on Feb. 11, 2011, during the Tahrir Square demonstrations in Cairo, we convened a diverse studio audience of New Yorkers who had experienced revolution during their lifetimes. No one could have guessed that President Mubarak would step down during that live broadcast, creating an unforgettable emotional stir in The Greene Space. Mona Eltahawy, Egyptian journalist and activist, exclaimed through tears, “This is the best day of so many of our lives.”

In another powerful moment, a tear crossed the cheek of an audience member Nov. 20 as she listened to the “Moonlight Sonata” performed as part of WQXR’s marathon presentation of all of Beethoven’s piano sonatas – a once-in-a-lifetime experience for many who stayed with us for all 12 hours.
At his Hot-Plate Cook-Off, daily talk host Leonard Lopate passed bread to audience members while world-class chefs sautéed scallops. A wine tasting and performance by the renowned Eroica Trio followed.

Soundcheck with John Schaefer attracts younger audiences with performers who are shaping today’s musical landscape: The Decemberists, violinist Joshua Bell and the cast of Broadway’s Fela!, among others. Driveway moments, folks!

Original signature series and initiatives in the live space have been conceived especially for younger and more ethnically diverse audiences. They include series such as The NEXT New York Conversation, Battle of the Boroughs, A Global Salon, and A New Theater of Sound.We share resources, audience and expertise with local and world-class cultural organizations such as PEN World Voices Festival, TheRoot.org, the Royal Shakespeare Company and Princeton University’s Center for African American Studies.

Battle of the Boroughs — a six-part series that consistently sells out — convenes about 50 ensembles a year, including hundreds of artists from all walks of life. The audiences, also diverse, select their favorite musician or ensemble within each of New York City’s five boroughs (the Queens competition comes March 2) and then the Ultimate Battle for citywide eminence at the end of June. Last year, 15,000 people voted online in the Battle.

The live audiences for these series are diverse in many ways: age, ethnicity, borough, radio listeners and non-radio listeners, and points of view. For the 2011 Battle of the Boroughs, for example, a classical Indian music ensemble prevailed. For the group’s victory concert in The Greene Space, the audience was made up mainly of South Asian audience members.

The Greene Space’s Zora Neale Hurston Project, which launches later this month, offers live events as well as on-air and online content about the late Harlem Renaissance writer, which specifically targets African-American audiences. In addition to working with world-class artists and developing content on multiple platforms, the project builds on the work of Brenda Williams-Butts, NYPR senior director of community engagement and audience development, whose work preceded The Greene Space with similar objectives.

Experimentation is the central tenet of our events. We see The Greene Space less as a fixed “space” than as a process for surprising discoveries and spontaneous learning.

We encourage radio producers to take advantage of the live space and audience as an opportunity to experiment with more interactive formats that break the radio mold.

Our promotional team, led by Theodora Kuslan, director of marketing, and Jennifer Houlihan, director of publicity, use The Greene Space experiences to amplify the brands of WNYC and WQXR.

By holding live events, we can expand our young adult audience — the largest age group in The Greene Space is 25 to 35 years old. And we can invite journalists, creating new opportunities for press coverage.

Learning from our challenges

There have been challenges in establishing something new like The Greene Space. We’ve had to establish a brand-new entity in one of the world’s most crowded cultural markets. We’ve struggled to integrate the production cultures of radio and live events.

With our level of activity multiplying faster than expected, we had to reallocate our workload and build a new website, relaunched last month, that sells tickets while serving as a content destination for interaction with video, audio, photos and social media.

Reading about the big-city project, our counterparts in smaller stations may at first dismiss the prospect of securing high-profile artists and marketing opportunities as wishful thinking. But all stations have a megaphone that they can use to build a live-event service.

About 75 percent of Greene Space operating costs are now offset by revenue that the space itself helps generate — ticket sales, space rental and partnerships with corporations and foundations. All revenue is reinvested into programming.  Some costs can be covered by bartering with caterers and other businesses that would like exposure in the live event, on the air and on the Web.

For people who come to Lower Manhattan at the appointed time, The Greene Space experience is face-to-face, of course, but our events also connect directly with people farther away through live video webcasts and on-demand video. Check out thegreenespace.org/video.

Listeners escape their usual confines along with the producers. At the beginning of events, our hosts often ask our audiences to “please take out your cell phones” and switch off the ringer. We then invite them to keep using their phones — to take pictures, tweet, and share with friends their experiences in The Greene Space.

Indira Etwaroo, Ph.D., is the founding executive producer of The Greene Space at New York Public Radio. She came to NYPR from the Brooklyn Academy of Music, where she worked with education and humanities programming. She has curated and presented cultural, artistic and scholarly programming for venues throughout the U.S. and abroad. Email: ietwaroo@nypublicradio.org.Photos: Aaron Epstein, Scott Ellison Smith and Stephanie Black for WNYC.
ShareTweet EmailPrint More