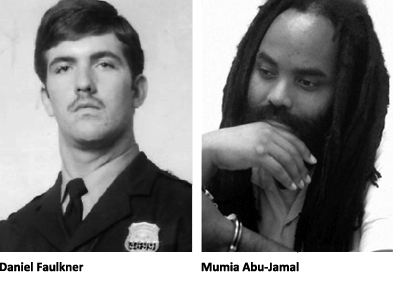 Mumia Abu-Jamal, the onetime radio journalist, activist and convicted killer whose planned jailhouse commentaries were dropped by NPR after an outcry 17 years ago, is off of death row.

However, he’s likely to stay in prison the rest of his life, without the possibility of parole.  Abu-Jamal is now jailed at State Correctional Institution Mahanoy, west of Allentown in eastern Pennsylvania.

Philadelphia’s district attorney, Seth Williams, said Dec. 7 [2011] the death penalty was a just punishment for killing a city policeman 30 years ago, but he wouldn’t prolong the legal struggle by asking again for execution. Twice the courts had ordered execution, and appeals saved him — to the relief of his partisans and to the outrage of those of Officer Daniel Faulkner.

In April, a federal appeals court had ordered a new sentencing hearing for Abu-Jamal in April, saying the court in his 1982 trial had given jurors potentially misleading instructions; the Supreme Court had declined to intervene; and witnesses are no longer available, according to press reports.

On death row, Abu-Jamal became a prolific writer and commentator, declaring his innocence in the murder case and eventually igniting a “Free Mumia” movement. Sen. Bob Dole (R-Kan.) and others objected vehemently when NPR announced in May 1994 that it would air a series of Abu-Jamal’s commentaries.

Twelve days later, then-Managing Editor Bruce Drake called off the broadcasts because it would be unfair to air his views without balancing commentaries by advocates for the murdered policeman. Pacifica Radio did air the prisoner’s commentaries.

Commentaries from prison nixed by NPR, then … 1994

Supporters of slain Philadelphia police officer Daniel Faulkner maintain opposition to legal moves on behalf of Abu-Jamal, who was convicted of killing the officer. Twitter: @faulkner4699

Michael Eric Dyson Show covers the December 2011 court decision setting aside the death verdict for Abu-Jamal. Vincent Southerland of the NAACP Legal Defense Fund is the guest. Taking Abu-Jamal off death row was in line with public opinion about the death penalty generally, Southerland said.

In one of his short radio commentaries this year, Abu-Jamal charges the United States with hypocrisy in making Iran the bogeyman of the hour. Prison Radio is headed by Noelle Hanrahan.