The Bulldogs of North Gwinnett H.S. have the ball, and Georgia Public Broadcasting has the broadcasts. It’s one of several pubcasters that air high-school and college games. The Bulldogs lost 17-7 against the Colquitt County H.S. Packers. (Photo: GPB.)

Blessed with digital multicast channels and eager to attract new viewers, PBS stations are finding success with high-school football and other sports as varied as NASCAR and Special Olympics on their schedules.

Still, they insist, gains in viewer interest, the opportunity to promote other shows during game broadcasts, and the positive vibes of bringing communities together more than justify any inconvenience or criticism.

To be sure, PBS is no stranger to sporting events. During the 1970s and ’80s, PBS was the first American TV network to carry tennis tournaments. From 1984 to ’87, it carried Ivy League football. Around that time, Hall of Fame pitcher Jim Palmer hosted a short-lived interview series, The Sporting Life.

Maine Public Broadcasting Network features high-school basketball, as it has for more than 30 years; Wisconsin Public Television, based at the University of Wisconsin, has carried the school’s athletics for 51 years.

And for many years the highest-rated title on Connecticut Public  Broadcasting’s CPTV has been University of Connecticut women’s basketball — in early December the nation’s second-ranked women’s team and still undefeated.

Still, in any game of word association, “sports” is not likely to be the first word that comes to mind after someone says “PBS.”
That is changing, particularly in Georgia and Connecticut. In all of public television, the second highest-rated show on Nov. 25, second to UConn women’s basketball, was a high-school football game in Georgia.

And the Connecticut network expanded its sports broadcasting last month, launching a 24/7 sports channel carrying high school, college and other sporting events throughout the state. CPTV Sports debuted on Comcast and Cox cable systems, with plans to expand to over-the-air and additional cable outlets early in 2012.

PTV has been carrying UConn women’s games for 17 years, generating huge ratings from the start. “We were getting 10, 12, 14 — sometimes even 16 — shares,” said Jerry Franklin, CPTV president. “Normally we might get a 2 percent. The ratings were phenomenal.”

Commercial stations quickly recognized the value of the Ladies Huskies broadcast rights, “and we had to compete with everybody and their brother,” Franklin said. “Everybody with a transmitter in the air wanted to broadcast these games.” These days, rights fees cost CPTV about $1 million, and production costs can add another $400,000.

Production expenses are mostly covered with underwriting from businesses eager to be identified with the team. “It’s a wonderful, wonderful platform for us,” Franklin said, “because we can promote all our other shows within the body of the games.”

Franklin said he is aware of interest in other sports as well, including high-school competitions and college-level field hockey, ice hockey and soccer. “We don’t think these other sports individually will be as popular as UConn women’s basketball, but, from an aggregate standpoint, we think they will be.” For that reason, he pushed to establish CPTV Sports on a digital channel.

Most events on CPTV Sports involve little or no rights fees, and the broadcast feed is often produced by the competition organizers themselves, such as NASCAR or Special Olympics. “I don’t have to spend $10,000 to rent a remote production truck,” Franklin said. At the same time, college students gain experience working on the productions.

Nebraska’s NET, based at the University of Nebraska, broadcasts more than 200 hours a year of sports, including high-school football, basketball, volleyball and wrestling. The network also has worked sports into its fundraising: Boosters can join the NET Sports Partners Club and receive perks such as sports gear, invitations to pregame events, an e-newsletter, and a preseason Sports Partners Breakfast, hosted by Adrian Fiala of the popular Big Red Wrap-Up show.

Michael Quade, now g.m. at Smoky Hills, recalls a sideline conversation last year when he was producing high-school football. “As I was shooting the game, I heard the cheerleaders standing behind me say to each other, ‘Hey, it’s the guy from Smoky Hills, he’s here covering our game!’”

“They know who we are, they know the show,” Quade said. “All this when they could easily just turn the channel and watch something else, it tells me that we must be doing something right.”

“We need to make a commitment”

“In Georgia, one of the many things that brings communities together is high-school football,” Ryan said. “When I looked at our ratings and the demographics when we did the finals, I said, ‘You know, we need to make a commitment to this.’ It’s a powerful source of coming together, of families, of communities, of school systems, and a way of supporting kids on a lot of levels.”

GPB shoots two high-school games a week, one for the broadcast Football Fridays in Georgia and live webcasting and another just for live webcasting. The network’s new GPB Sports division, launched in August 2010, creates content for multiple platforms: A selected game of the week airs Fridays, complete with a pregame show, scores from around the state, and a post-game program, GPB Sports Central. The redesigned web platform, GPB.org/sports, offers on-demand video of selected games, pages of material on teams from more than 400 high schools, rankings, sports blogs and live chats.

GPB also developed a downloadable mobile app that provides sports news, scores, rankings and blogs, and has distributed it to 6,800 users so far. The network said the app averages 1,100 users a day and that fully 10 percent of high-school football viewing takes place on mobile devices. During the games, GPB assigns a staffer to engage in social-media give-and-take with fans. 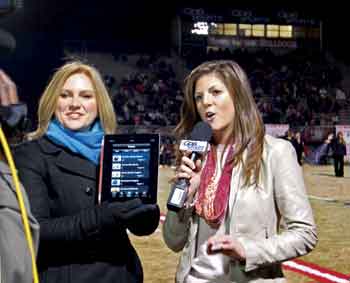 This year, for the first time, GPB carried a high-school football game every Friday night while streaming another game on its website. To focus on education, every game includes profiles of the school, band, coaches, parents and kids. “It gives a way for the community to sort of gather around the communal fireplace and talk,” Ryan said. “And that’s what we are. We’re the public square for high-school sports.”

“Many people watching high-school football never came to us before,” she added. “Now they know us. Now they know GPB has value to them. Now it’s a place they are used to going to, and I promise I will bring them in for other things.”

GPB’s enthusiasm is shared by neighboring state-operated networks. South Carolina ETV and North Carolina’s UNC-TV agreed with GPB this year to carry eight Southern Conference college football games each season through 2013. The 12-member Southern Conference, including teams from the Citadel and Furman University, had been on a regional Fox Sports net, but public TV offered a better deal in some respects. Unlike Fox Sports, the three pubTV networks guarantee the conference a window for its games and allow game video to be posted on college websites.

Ryan said she has heard no Georgians criticizing the sportscasts on public TV, but in Connecticut Franklin hears it frequently.

“I know that sounds cavalier,” he said, “and I don’t mean it to sound that way, but we actually follow the market. We have to. We would be dead if we didn’t. But we use our not-for-profit community lens as we interpret the market.”