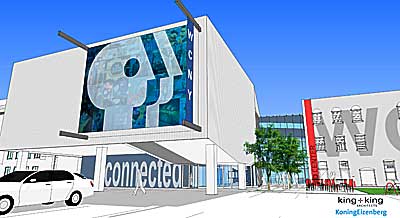 The Syracuse station, which will house the centralcasting unit, would be rebuilding its facility anyway. It’s moving downtown to a repurposed factory. (Image courtesy of WCNY).

By having two or three big master-control facilities oversee the digital assembly and transmission of broadcast schedules for all of the nation’s public TV stations, the field could save tens of millions of dollars a year, according to Mark Erstling, CPB senior v.p., system development and media strategy.

CPB will cover a big part of the costs of public TV’s first two “centralcasting” setups this year, Erstling says. On Sept. 19, the CPB Board approved a $6.6 million grant to equip a centralcasting facility in Syracuse, N.Y., for all nine pubTV stations in New York State plus New Jersey’s four-station network. The grant covers about 90 percent of the cost of the project, to be located in the new home of WCNY-FM/TV in downtown Syracuse.

The first of the stations to try it, WCNY itself, will start in a year.

“We will work with these and see if we can model out what a national footprint looks like,” Erstling says. “It’s reasonable to think that two or three of these could handle the whole country.”

Three other alliances of stations also have applied for CPB aid in a competitive grant round that closed in August.

One group of 10 stations, which would be served by a centralcast facility at WJCT in Jacksonville, Fla., is mostly in Florida but includes one in California.

In its ongoing push for cost-saving restructuring of stations, CPB is looking to the core broadcast function long regarded as the best bet for joint operations. At the moment, CPB doesn’t have enough money to help with much more technical consolidation.

CPB is operating under the premise that its pool of equipment money will be the last for that purpose available from Congress, Erstling told Current.

The corporation and its advisory panel agreed to spend its remaining digital money on “significant” projects that can have big effects on stations’ economic sustainability, Erstling says. “This is a real game-changing kind of project. The goal here for us is … to help drive the operating and infrastructure costs of stations as low as it can go.” CPB plans for the project to go operational in 18 months, by spring 2012.

For the nine New York stations, sharing the cost of a single, highly reliable master control staff and facility through Centralcast LLC, a separate nonprofit set up by WCNY, will save $2.5 million a year, consultants from McKinsey & Co. estimated, according to Erstling.

A single facility with 18 staffers will manage the intake, trimming, storage, schedule assembly and distribution and archiving of PBS, syndicated and local programs, sharing a single set of engineers and fewer expensive service contracts for hardware and software.

Savings are easier in New York state, where the stations already share a digital fiber-optic interconnection, running at 1 Gigabit per second, which reduces the cost of shipping their signals from the centralcast facility in Syracuse to the stations.

Participating stations range from the big WNET/WLIW combo, which recently added New Jersey’s four-station network, to the small Watertown, Plattsburgh and Binghamton pubcasters. In between are long-established operations in Buffalo, Rochester, Albany and Syracuse. They will pay fees based on the number of channels handled, Daino said.

Stations will plan their schedules as usual, Erstling says, but both national and local programs will be stored on Centralcast servers, assembled automatically into broadcast feeds and sent to stations’ transmitters from Syracuse.

Daino: champion for the project

A requisite to bring about facilities sharing, Erstling says, is a station manager who effectively advocates a plan. The champion in New York was Robert Daino, president of WCNY in Syracuse.

“It took 22 months to get to kumbaya,” Daino says. “You have to overcommunicate so you don’t leave anything to assumption.” To build the necessary trust, it helped that stations in the state already were cooperating on educational projects and their relationship with the state. He emphasized that stations would keep complete control over their schedules.

To lower staffing costs, the facility will rely on computer monitoring of the outgoing signals and of the output of stations’ transmitters across the state. While a single technician can monitor only four channels, the automation can detect exceptions from the technican norm and raise an alarm, allowing the staffer to handle perhaps 11 streams in primetime and as many as 36 overnight, Daino says.

But each station will retain at least one digital storage device that can send its signal to the transmitter in an emergency, he adds.

To keep the project sustainable, payments by participating stations will include escrow fees to cover the cost of future equipment updates and replacement, Erstling says. Depreciation cost isn’t always included in stations’ budgets. Stations that skip it must launch special capital campaigns when equipment wears out or becomes obsolete.

The benefits vary from station to station. WXXI in Rochester and WMHT in Albany/Schenectady are eager for an upgrade in equipment capability, observes Norm Silverstein, president of the Rochester station. WNET/WLIW/NJTV, with three main signals carrying numerous multicast streams, will save on labor costs and expensive Manhattan floor space.

One clear saving with centralcasting is that each station does not require its own backup system to broadcast in case its main system is disabled in an emergency, says Duane Smith, director of technology at WJCT in Jacksonville.

Some owners of commercial stations have been centralcasting for years. Smith notes that both Gannett and Post-Newsweek serve multiple stations from facilities in Jacksonville.

CPB will also use cash disincentives to keep stations committed to the facility partnerships. “We’ve been clear,” Erstling says. “If they take our money to build them and if they don’t stick with them, we get our money back.”

The corporation played matchmaker for a joint master control for two independently owned Denver stations in 1998, but the partnership dissolved in 2009.

The big gain from the joint facility was that both stations were able to get an automated system, improving quality and reliability and eliminating the need for manual handling of videocassettes in real time.

The arrangement had the characteristic strains of any client/provider relationship, Johnson says, with the tension peaking when both stations called on the control room to handle their pledge drives at the same time. Competition for resources was magnified by the stations’ ongoing rivalry for Denver viewers and members. However, Johnson says, “I don’t think they were operating in bad faith,” and she notes that the two stations have since talked about sharing transmission facilities.

“Neither station had thought comprehensively about the needs of the other partner” while planning, Johnson says. “Everything about this was very new to both stations.” Neither could foresee their needs as broadcasting went digital. The switching equipment lacked enough capacity to handle multicast channels when KBDI moved to DTV, for example.

If stations consider shared facilities, they need to jointly develop plans for staffing as well as equipment capabilities in a true partnership, Johnson advises.

The Denver stations tried sharing well before many big commercial station chains were doing it, says Craig at Rocky Mountain PBS. And it’s still difficult for broadcasters “to give up what will feel is control over delivery,” he comments. “It’s probably more like a mindset issue than anything.”

But Craig is ready to try again. His station’s chief exec, Doug Price, is in active discussion with stations north and south of Colorado, looking for the right opportunity.

That would have to include low-enough costs for shipping the broadcast stream from master control to distant transmitters. Two years ago it became cheaper to lease fiber-optic lines to carry video across the mountainous state than to operate microwave relays. Craig says the falling cost of hookups “opens a whole new discussion” about shared facilities.

THE STATIONS IN CENTRALCAST LLC