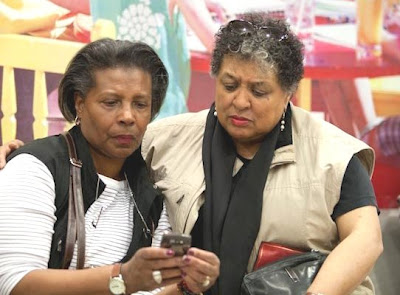 WTTW’s Grannies on Safari hosts and the tour group they’re leading just landed (3 p.m. Eastern Feb. 2) at the airport in Athens, Greece, on a U.S. State Department charter flight from Luxor, Egypt. Their spokesperson Maria Dugandzic-Pasic said Regina Fraser and Pat Johnson told her that the entire Luxor airport was full of  tourists frantic to leave. Because the travelers have no access to television or the Internet – and opted to stay on their tour boar on the Nile – they were not aware of the seriously deteriorating situation in the country as mobs demanding the resignation of Egyptian President Hosni Mubarak begin to clash with pro-Mubarak crowds. The group arrived for their tour Jan. 26. Above, Fraser, left, and Johnson checked messages at the Luxor airport as they awaited news on their flight. Ten travelers are with them, including an 82-year-old. (Image: Courtesy Julio Martinez, Grannies on Safari)