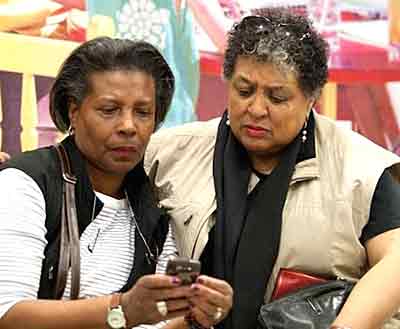 As Egypt erupted with anti-government protests and violent reprisals early in February, Regina Fraser recalls, she and Pat Johnson, her co-host on the public TV program Grannies on Safari, were gazing from a cruise ship on the Nile. When they passed a clump of reeds, “we both said, ‘Moses!’”

Though neither claims to be a religious prophet, they were quick to note the parallels with the Bible story: the infant Moses, launched into the Nile in a cozy basket, escaping danger and rescued among the reeds.

The two Grannies and their tour group of 14 were, for the moment, safely ensconced in comfortable floating quarters as mobs paraded through Cairo  demanding the ouster of President Hosni Mubarak.

They all had witnessed violence firsthand in the city. Their videographer was briefly detained, his passport was copied, and the authorities threatened to seize his equipment.

For a full week, they wondered whether they’d have to wait out a revolution on their riverboat. Finally, after hearing of the group’s plight on CNN, U.S. State Department officials came aboard to plan their swift and safe removal. On Feb. 2 the group flew out on a State Department charter along with about 175 other Americans.

Current reached the Grannies (as they call themselves) after their group escaped to Athens, Greece.

The tour was an offshoot of Grannies on Safari, a travel-and-culture show that the two best friends, Fraser and Johnson, put together in 2006 after years of work in marketing and arts management, respectively. Grannies fans travelled to India in an earlier trip; a journey to Africa is coming up in March.

This time the plan was for a leisurely exploration of Cairo, plus a Nile cruise, from Jan. 26 to Feb. 4.

When this group arrived in Cairo on the 26th, the already unstable political situation was tipping. By Jan. 28, “protesters had assembled very near our hotel in Cairo,” Johnson says. “Fires were burning in various locations, there was vandalism. People were killed, but we didn’t see that in the immediate vicinity. We saw crowds and clouds of tear gas.” Throngs of protesters refused to make way for the group’s bus, so the driver had to let them out several blocks from the hotel; they got inside just as the hotel doors locked behind them.

During those first few days the group ventured out for “an abbreviated visit to Alexandria,” Johnson says. “We were only briefly able to visit the famous catacombs. We were there 15 minutes when all of a sudden we were told to get back on the bus.” Vandals broke into the Cairo Museum and damaged priceless relics; the museum was locked down before the group could visit.

Cameraman Julio Martinez ventured on his own into Cairo to see the protests. He had tagged along with the group for a vacation, Fraser says, but ended up shooting valuable footage of the Grannies’ unexpected adventure. The authorities attempted to take Martinez’s camera after he witnessed the violence. “There was a little struggle for him to get back to the hotel,” she says. “He came back pretty shook up,” but unhurt.

Fraser and Johnson repeatedly tried to contact the U.S. Embassy. When Fraser finally reached a embassy staffer Jan. 30, she was switched to a recording that advised her to check  evacuation information on a website — even though the Egyptian government had cut Internet access days earlier. While the Grannies were stuck in Cairo, their enterprising public-relations agent arranged cellphone interviews with Good Morning America, Chicago newspapers and CNN.

Luckily, their companions on the boat were experienced globetrotters who knew that international trips, which can be unpredictable, demand flexibility and patience. “They were able to just go with the flow,” Johnson says. “They were wonderful. We didn’t get a lot of complaints.” All managed to find the humor in the situation. They had lucked out to be “captives” on a luxury ship during a revolution.

Four group members departed for the Luxor airport Jan. 31 on the chance that they could stand by and snag seats on an outgoing flight. Two ended up pitching in with a group of archeologists to charter a plane that flew to Cairo and then out of the country; two others made it onto an EgyptAir flight to London.  Fraser’s daughter explored a charter for the Grannies but discovered that hiring a plane to take them only as far as Sharm el-Sheikh, a tourist town on the southern tip of the Sinai Peninsula, would cost around $90,000. Not that they had much cash at all: Most bank teller machines were out of money, and travel agencies were accepting only cash.

Three days later the tourists flew to Luxor, 400 miles south, where they camped on the Nile cruise ship for the next four days, along with travelers from America, South Africa and Britain, as well as several Egyptians. They all decided to remain on the boat instead of moving to a hotel. “There was food, we could sleep comfortably,” Johnson says. “In the long run, it was the best thing for us.”

Fraser was impressed and grateful that nearby shopkeepers looked after them, making sure the docking area was secure. Local police boarded the boat to see that all was well.

And so on the boat they sat, the captain slowly motoring up and down the river to keep his passengers’ boredom at bay.

On Feb. 1, several U.S. State Department officials — alerted by the Grannies’ CNN interview — arrived to help plan their flight from Egypt. The next day they flew on a State Department charter from Luxor to Athens, Greece, where U.S. Ambassador David Smith and his wife, Diane, greeted them.

But still no vacation for them: Athens was miserably cold and rainy, and the group was only able to ride a small bus around the city to see the sights.

Still, they’re returning home with Cairo footage for a webisode to release before Grannies on Safari kicks off its third season in May.

They had tickets on a Feb. 4 flight home to Chicago, which may involve a different kind of extraordinary adventure: That city is still digging out from one of the worst blizzards in its history.

Correction: The print edition misnamed the U.S. ambassador to Greece and his wife. They are David and Diane Smith.
Comments, questions, tips? sefton@current.org

Pubcast radio stations and program producers have discovered the joys — and occasional terrors — of offering domestic and international trips for fans and donors. A Current reporter in June 1999 turned up more than two dozen stations or state networks offering trips ranging from opera tours of central Europe to South African news-junkie junkets.

Program website for Grannies on Safari, which opens its third season in May.

Pat Johnson talks to Chicago’s WGN-TV about the “difficult, challenging experiences” the group had in Cairo.

The Grannies discussed their upcoming season at the Philadelphia Inquirer Travel Show in January.

The co-hosts of Grannies on Safari are best friends who decided to create a program that combines travel with arts and cultural education. Fraser was a marketing exec and Johnson an arts management consultant. The show is presented domestically by WTTW, Chicago, and syndicated by the UK Travel Channel. It airs in 120 countriies and is captioned in 16 languages, according to the producers.

Allan Phillips won a Chicago/Midwest Emmy in 2008 the soundtrack music of Grannies on Safari.

PTV at Sea offers pubcasting-theme cruises so that station donors can “experience the best of public broadcasting.”